Most foragers know of cattail pollen, but, if you live in a city, finding marshes where you can harvest, getting waterproof clothing/waders, and, most importantly, hitting the spot at the correct time when the pollen is ready (generally a week or less if it’s windy) can turn harvesting an interesting ingredient into a frustrating experiment, at least it did for me. 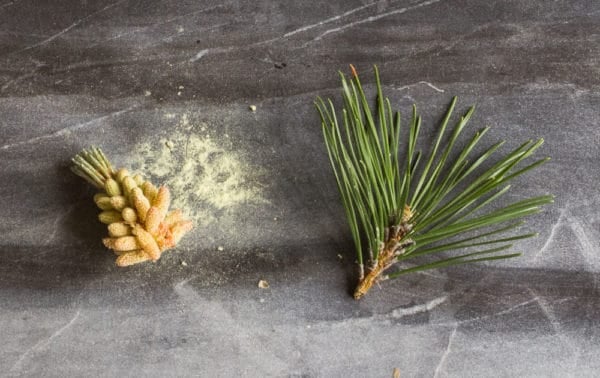 Catkins filled with pollen, this is the stage, and it’s a short one, where you want to harvest them for pollen.

I’m embellishing here, but, it’s likely your cattail pollen-harvesting adventure might yield a few tablespoons of yellow fluff, filled with ants and swamp detritus. Then after processing, you might look online, and see recipe that call for cups of pollen at a time, and, if you’re like me, wonder how the hell someone could harvest that much, hurl your pitifully tiny bowl of pollen in the air and swear to never try harvesting it again.

Or, you could just harvest pine pollen.

Cattail pollen isn’t that tough to get, I’ve done it, and made pancakes and muffins. But, the timing can be difficult, and I find pine pollen a little more forgiving. You also get to walk on dry land. But, I’m getting ahead of myself. First, you probably want to know why on earth anyone would want to harvest the stuff.

I like to cook with interesting ingredients. For some, pine pollen, and other pollens, like cattail, are used in medicinal ways, or taken as supplements as the pollen contains testosterone. Pine pollen especially, has been used in Asia as a medicine for a long time, like *a lot* of things. 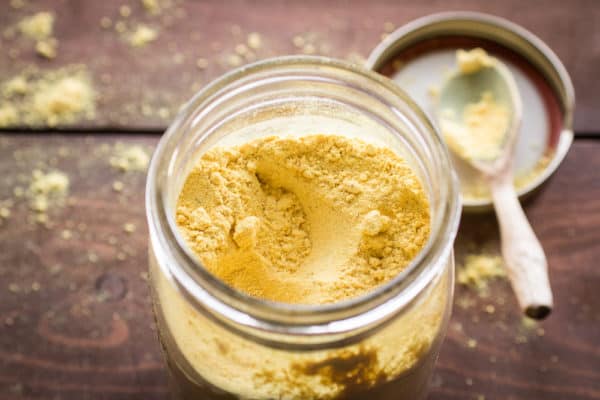 Don’t drop the pollen, it will make a mess.

It’s a nutritious substance, but like other “medicinal” items, I think its a good idea to research it before putting inside your body, especially if you’re pregnant. It goes without saying too, if you have bad pollen allergies, cooking with pollen probably won’t be for you.  If you’re looking for medicinal tips and tricks, you won’t find any here, but, I can definitely tell you how to harvest it and get the best yield, store it, and share how I cook with it.

The hardest part is getting to the trees before the wind has done it’s job to carry the pollen away. Where I live in Minnesota, this is usually around the third or fourth week of May or the first week of June. Here’s what I do: I go to a place that has lots of pine trees, in my area, typically red pine, and I look for male catkins: yellow and plump with pollen. 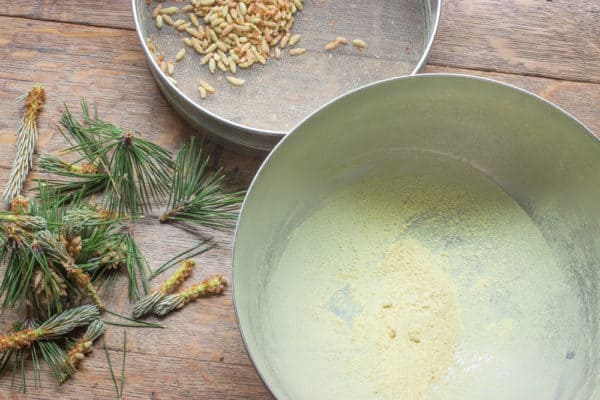 Pine catkins need to have the pollen sifted out. This is easy to do if you dry them first. In the picture you can see pine tips with the young growth/spikes attached.

I bring with a paper grocery bag, and with a scissors, I carefully, gently remove the catkins, not taking too many from any one tree, until I have a good bag or two. From here I bring the bags home, and turn my apartment into pollen factory. I do this at a farm where I have permission to harvest most of the wild plants, but, if you’re harvesting in town, you might want to just strip or twist off the catkins with your hands if you don’t feel like using a scissors.

Unlike cattail pollen, It’s going to be difficult to use the old gallon milk jug with a hole cut out that you place over the branches and shake off the pollen, so, my advice is to try it out, and figure out what works for you.

You’ll notice by handling the pine catkins filled with pollen, that some gets onto your hands, and you might be tempted to just shake them in a bag to release the pollen. That will kind of work, but it’s not the most efficient.

The golden pollen nugget here is dehydration. Drying the catkins makes the pollen release, so you want to put a sheet of paper, or something else underneath them as they dry to help catch the pollen so you don’t lose it. You can do this with whole catkin clusters, or picked off the pine spike, as Illustrated here so they fit in my dehydrator. You can also just leave the catkins out, but keep an eye on them if they’re damp for mold. 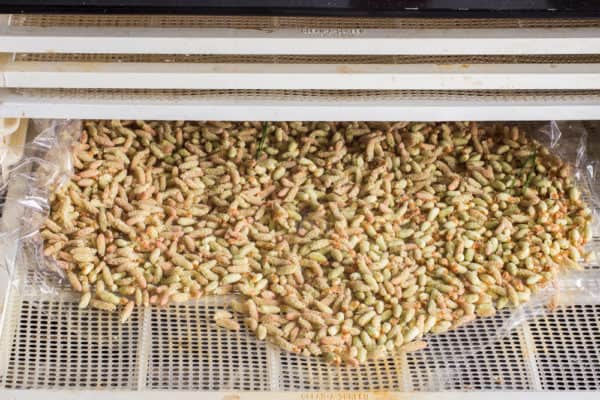 Put the catkins on a tray, or even on some plastic wrap in the dehydrator, to make sure you catch the pollen.

Once the catkins are dried (anywhere from a few hours to overnight depending on if they were damp or not), all you have to do is shake them in a strainer (I use one called a tamis seive) and viola, pollen.

I’ve seen a number of different ways to do this online, and some other ones will work, but don’t crush the catkins up in something like a mortar and pestle, or worse, a food processor. Crushing, or using other violent force to break up the catkins will only give you a less pure result, and a diluted color with flecks of red catkin material. You want pollen, as pure as possible, not catkin fibers mixed with pollen.

After you’ve sifted your pollen once, it’s a good idea to sift it again, just to get it as pure as possible. You’ll probably notice a lot of things in your pollen as you do the first sift: pine needles, various tree debris, and, live ants or insects.

This is important. Think of pine pollen as a living thing, with compounds (especially delicate, flavorful ones) that need to be cared for. Just like a lot of other products, like flower infusions and the like, keeping the pollen refrigerated or frozen is the best way to store it.

I keep my pollen in a bag, and the bag in another vacuum sealed bag in the freezer. You could sure put it in a glass jar too, especially if you want to dip into it regularly, but absolutely do not put the pollen in a plastic container in the freezer. Plastic has a tendency to be porous, and it can hold air. In a freezer, air is the enemy of flavor, and the maker of freezer burn, so the less air that touches the pollen, the better.

If that isn’t enough for you, know that off-flavors can get absorbed into things, and if you’re pollen is in there for the long haul, in a loose container, don’t be surprised if it tastes like old socks when you take it out to cook with, put into your medicincal breakfast shake, or what have you. 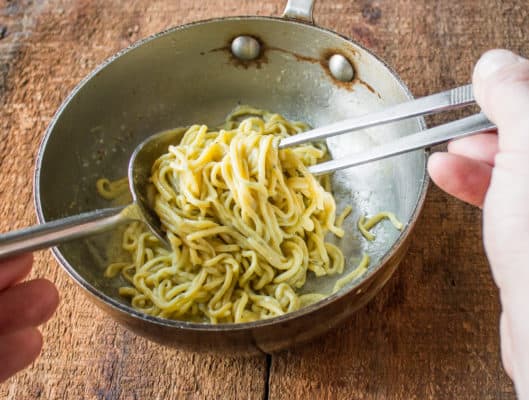 Pasta tossed with butter and pollen sauce is great.

Making yellow pancakes looks cool, but I also wonder about consuming such amounts of pollen if others take tiny capsules as a medicinal supplement. I’ve wary of consuming too much of anything that contains endocrine-type compounds, and it’s one of the reasons I rarely eat soy, unless it’s been fermented somehow, as it contains estrogen. Either way I’m not a doctor, so you’re on your own here.

I use pollen as a delicate flavoring, often used with nothing more than a little salt, stock, and, most importantly, fat. Pollen is dry, and doesn’t taste like a lot by itself, (cattail is a little more flavorful) but, once you add a little fat (typically butter) and a pinch of salt, it almost takes on a cheesy quality, and, when cooked with other ingredients from the same region or area, can be a fascinating example of terroir-based cooking, and a way to be in touch with where you live.

Here’s a recipe I made for a special dinner with pollen, it uses cattail pollen, shoots and duck egg noodles for a sort of swamp-centric pasta course. Pine pollen and cattail pollen are interchangeable as far as cooking goes. Maybe it can give you some inspiration. 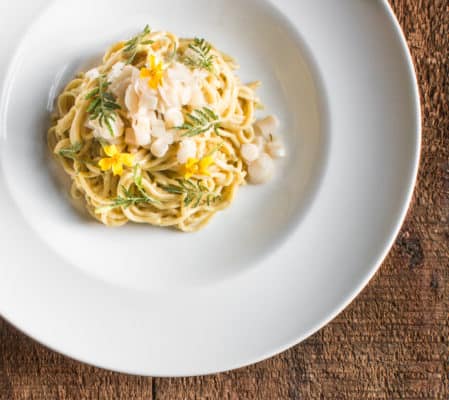