I have for you today what I think is one of the most fascinating pine pollen recipes ever: what I've been calling Pine Pollen Fudge or Pine Pollen Truffles.

I started working on the recipe last year, but had a couple accidents with my pollen (D'oh!) and, if you've ever gathered the stuff, you know that it's extremely labor intensive, and if you run out, even the most granola of coops won't be able to help you out.

For the record, some places sell "pine pollen" online (mostly from China) but every sample I've tasted seems impure, and tastes bitterly of pine needles. Bee pollen is similar, but more wet, and needs to be dehydrated before using like this, and doesn't taste as good.

In the wild food world when pollen comes up, most people will be familiar with cattail pollen. I like cattail pollen, but pine pollen is probably more accessible to most people, and doesn't require waders. All pollens are hard to nail down though. With pine pollen you have an extremely small window of harvesting potential to begin with, but you also have the rains of May and gusts of wind to contend with, which makes it one of the most elusive and tricky things I've ever harvested.

I'm getting better though, and this year I smashed my harvesting record. Previously the largest amount of pollen I'd ended up with after an afternoon of harvesting was about 2 cups. This year I got 9 cups, or just over half a gallon, a nice increase of about 450%. Paying attention to the wind, specifically, how I could outsmart the wind by finding trees in areas with windbreaks was the key. Props to my Grandpa who has a little grove of secluded red pines he planted years ago.

A historical confection from Iraq and China

Back to the fudge. The basic idea had been kicking around in my mind for a few years, ever since I read about a traditional "sweetmeat" (candy) made in both China and Iraq using pollen harvested from cattails.

I can't seem to find the traditional name for the confection in either culture (if you know of either of them, please chime in) but I do know that, way back when, the traditional sweetener of the Iranian version was probably date syrup, and I would assume Honey was/is used in China, but I can't be certain. Whatever it's called, the idea of a raw confection made from pollen captivated me, and I had to make some.

Update: someone from China reached out and informed me that the Chinese version my be made with pine or cattail pollen, and is known as Songhuang Bing 松黃餅.

The flavor of pollen is fascinating. Go up to a pine tree or a cattail ripe with pollen, give it a good shake and taste some of the silky powder that comes off on your fingers (as well as your eyes, ears, nose, face, pants, and everything else) and you may think it a tasteless, precious novelty-I did at first.

The historical accounts and traditions made me give pollen another shot though, and I'm glad I did. One account I read described pollen as having a "biscuity" quality to it, and that's a pretty good description, but one that won't make sense until you eat it in some sort of concentrated form, as eating just a fingertip full will taste like flavorless yellow dust.

I hit pay dirt when I started attempting another Iraqi candy made with pollen: a sort of concentrated block of the stuff made by steaming the pollen with sugar.

One taste of my first (failed) attempt still revealed a completely new flavor for me, which I can say is a pretty rare thing. It's a sort of delicately nutty, yeasty, and pleasant taste, lightly floral, and, as you might expect, begging to be paired with honey, which is what I've done here.

I suspect the original confections are nothing more than a sweetener mixed with pollen and packed into molds. I find overly sweet confections a little cloying though, so I tried a few ways to curb the sugar.

I knew I wanted to be able to form the pollen candy into a sort of edible something I could roll or form and serve raw, so I kneaded some soft butter into it, added a pinch of salt and honey, and, voila: pollen fudge.

The texture is soft, the flavor floral and delicately sweet, and the pollen finishes by melting on your tongue. If you have the chance to get some pollen this year (cattail pollen will be ready later in the season and is fine if the time for pine pollen has passed where you are) I really recommend you try some. 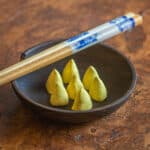 Getting the right texture

*People sensitive to bee pollen, or any type of pollen should probably pass on enjoying this.

END_OF_DOCUMENT_TOKEN_TO_BE_REPLACED

Special thanks to Joan Yang for this one.