Last week we had a couple over for dinner and the woman, a friend of my girlfriend I'd met many times before, was, unbeknownst to me, a fly-fishing apex predator.

I still have trouble catching anything but rocks with my rod, but she showed up with an entire cooler filled with 8 whole brook trout, still glistening and slippery from the water.

After we had dinner, I begged the last four brookies off her, which she happily gave away, mentioning that she'd be back at the stream tomorrow to catch her limit again.

The next day, I gathered a few spring ingredients that were perfect at the moment to cook with them for dinner: the last of the spring shoots (fiddleheads, swamp saxifrage and solomons seal shoots, along with a few tender pheasant backs and wild mint).

It was going to be a great dinner, until I looked in the fridge and noticed all the beautiful  brook trout were missing. My girlfriend, wanting to share the wealth, had donated ALL of the trout to her family without consulting me.

Frustrated, I went to town and bought a few local rainbow trout filets from the Driftless area of Wisconsin and made the same dish I'd been intending to eat. It wasn't the same, but, it was the best I could do. Lesson learned. Next time I hide the fish.

This is just a simple rainbow (or any trout or small pan fish) meuniere, with the addition of a few spring vegetables and mushrooms. If you have some near you, the swamp saxifrage shoots are really great here, as there one of the only spring shoots that you can simply slice raw and eat to enjoy them at their juicy, crisp peak.

The other garnishes are ramp oil mixed with a dash of lemon juice to taste, which is a good example of how I use it for everyday cooking as a sort of quick vinaigrette. The pheasant backs are stewed with a touch of garlic and white wine, and they're good all by themselves too, see the recipe for white wine pheasant backs here. 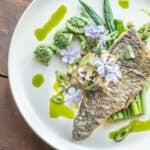 Trout with Pheasant Back Mushrooms, Spring Shoots, and Ramp Oil