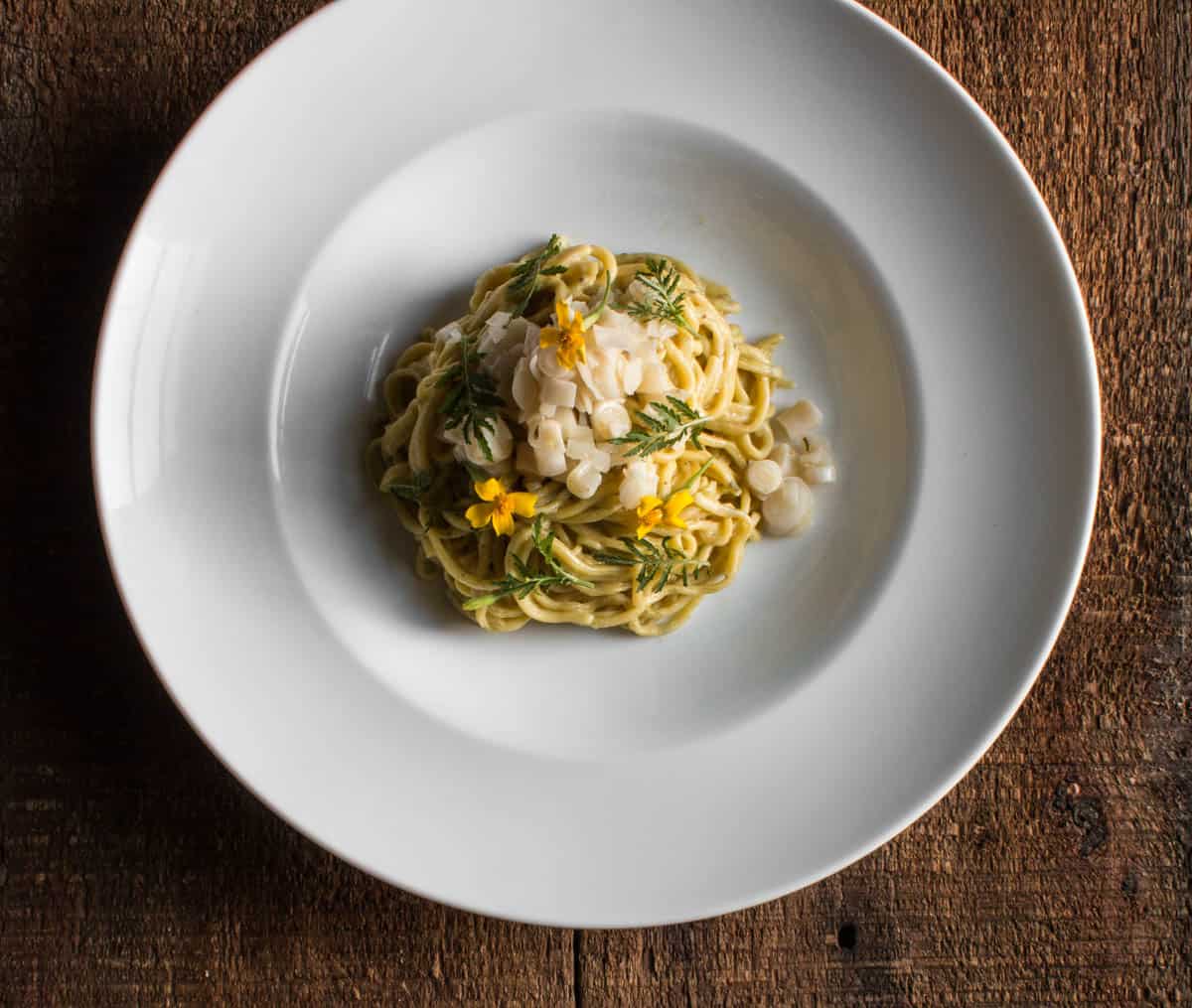 If you can collect enough flower dust to bake with you're a foraging savant, and a better hunter than me. A quick google of "cattail pollen recipes" will show you different ways of using pollen, mostly for pancakes and baked goods.

Honestly the baking looks interesting, and I love the color the pollen adds. But, when I read recipes for cattail pancakes, I have a little cognitive dissonance. I mean I just spent an hour in the heat and bugs gathering 1 cup of pollen, then another hour processing it, and I'm now supposed to blow it on a single batch of pancakes?! In the words of an unruly line cook I used to have: OH HAYLL NO. 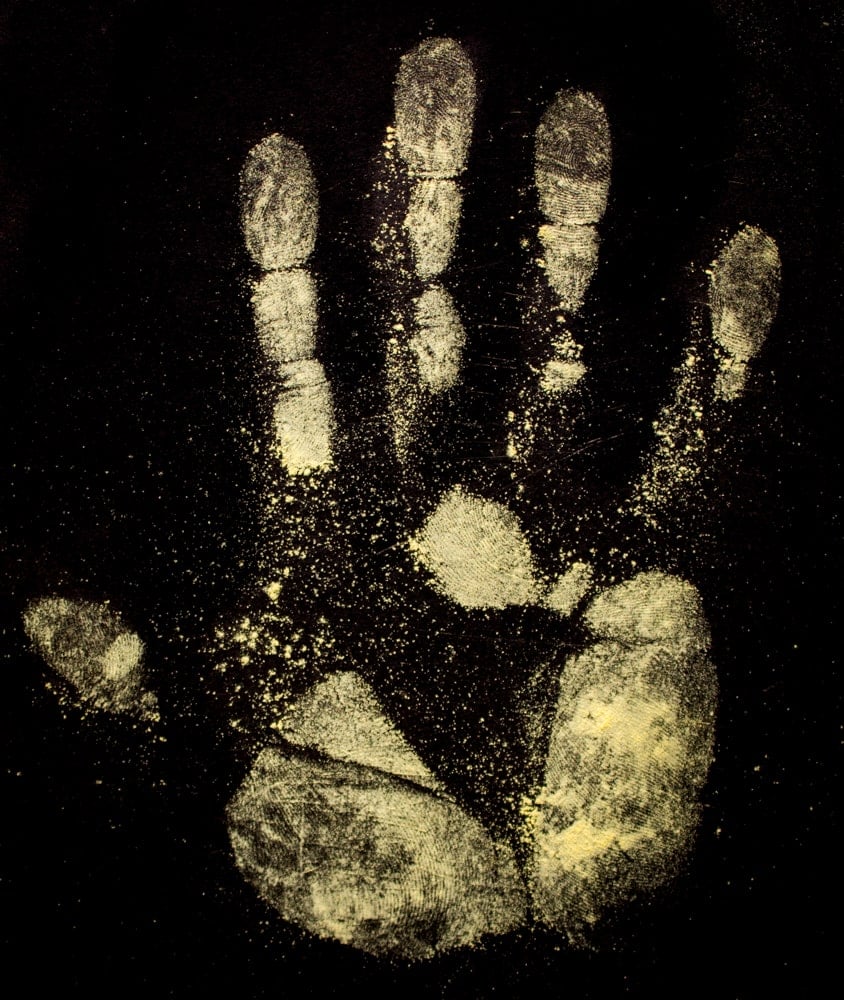 Getting pollen is tricky. I'm always about a week too late, the plants might have a little pollen in them, but they're never as fat as pictures in the guides. It's all about timing.

In 2016, I was driving slow on a country road, hunting by car (a great way to hunt on hot days) when I drove by some cattails that were just fat with pollen.

Like with so many wild foods, timing is critical to getting what you want and having it be in a state that will taste good. I grabbed each loaded cattail head and shook the pollen into a plastic gallon water jug with a hole cut in the side a la Sam Thayer. In the end I probably got a good ½ cup of pollen after about 30 minutes monkeying around with the plants. 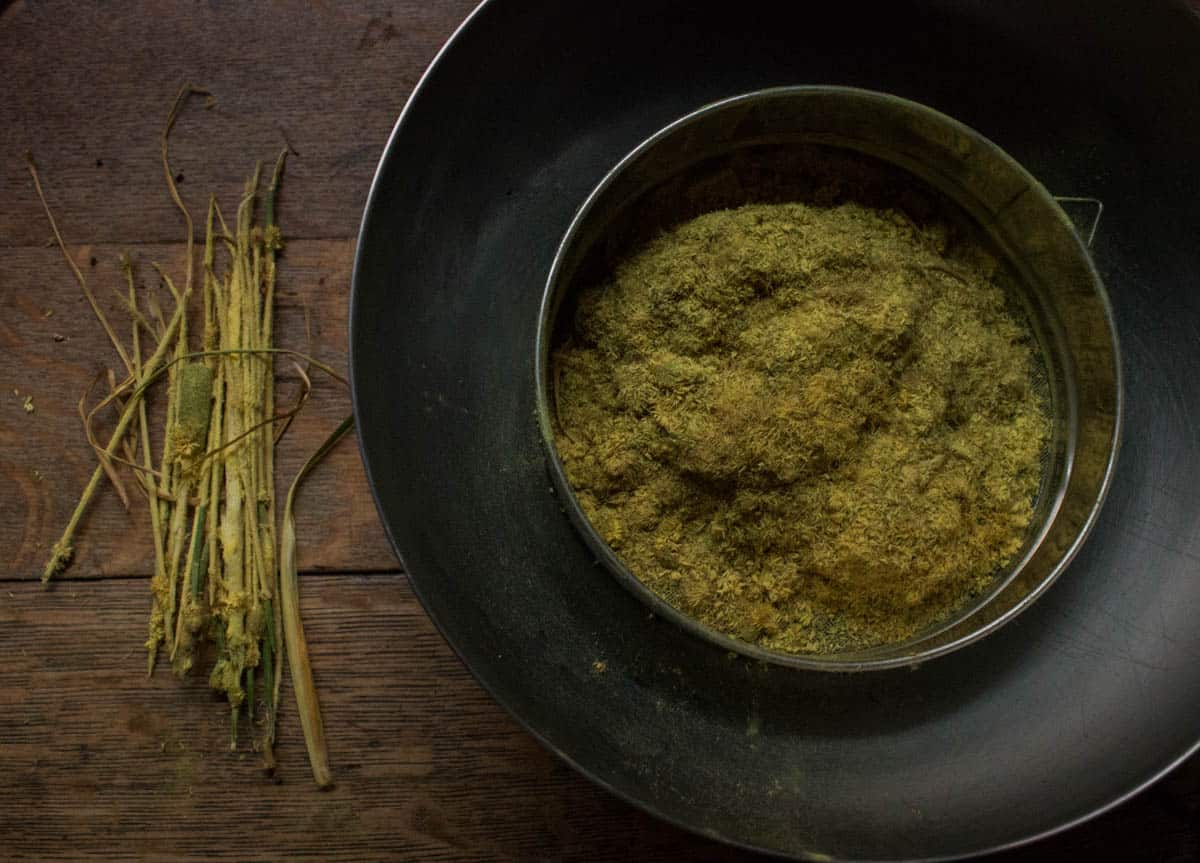 Extracting Every last solitary smidge. Generally you should be able to just shake it out of the heads. Stripping off the cattail flower matter as above is for people (like me) who always get to the cattails late.

First thing I did when I brought back the harvest to the restaurant was to bring the jug of pollen to kitchen and see what I could do with it. I tasted some pollen raw, it tasted like tasteless flour.

I shook the jug around a little bit, and I could see things other than pollen in it, namely a bunch of ants. After sifting the pollen through a tamis sieve, I got to work. Here's a outline of how the taste experiments went. I was working with a total of maybe a scant ½ cup of pollen, so I needed to experiment with small amounts.

My first time cooking with pollen

The first thing I made was a simple pasta dressed with the butter and the sauce, nothing else. I put the pollen on the back burner for a year, then made sure to hit the patches I knew to get some the next year. I still didn't have enough to make bread or anything like a baked good. To all you people that fill bags full of pollen I swear it is not real, and that you must be mocking it up with all purpose flour and tumeric. Charlatans! 🙂

But, I had enough that I could serve at least 100 orders of the pasta on a tasting menu, if the cooks measure out by the ½ teaspoon, so when I was planning a dinner with Chef Wyatt Evans at Heirloom I knew it would be a good time to bring it out. As we were dreaming up the dishes over a beer one night, Wyatt mentioned he had a lemon gem marigold plant in his garden, and suggested we use it on the dish.

Left to my own devices, I would've made the pasta with the cattail shoot relish and pollen sauce, but another garnish could be worked in, but it absolutely could not be grated cheese, since it would overpower the flavor of the pollen with it's salt. Wyatt's suggestion was the perfect accent: flowers, pollen, pollen and flowers.

If you've never tasted marigold leaves and flowers, they have a citrus aroma that give you a shocking pop. Think of marigolds like an herb, not like a flower. Lemon jem marigolds in particular are my favorite. Thanks Wyatt.

Here's the dish we ended up serving that evening. Some of you that attended may even remember it. 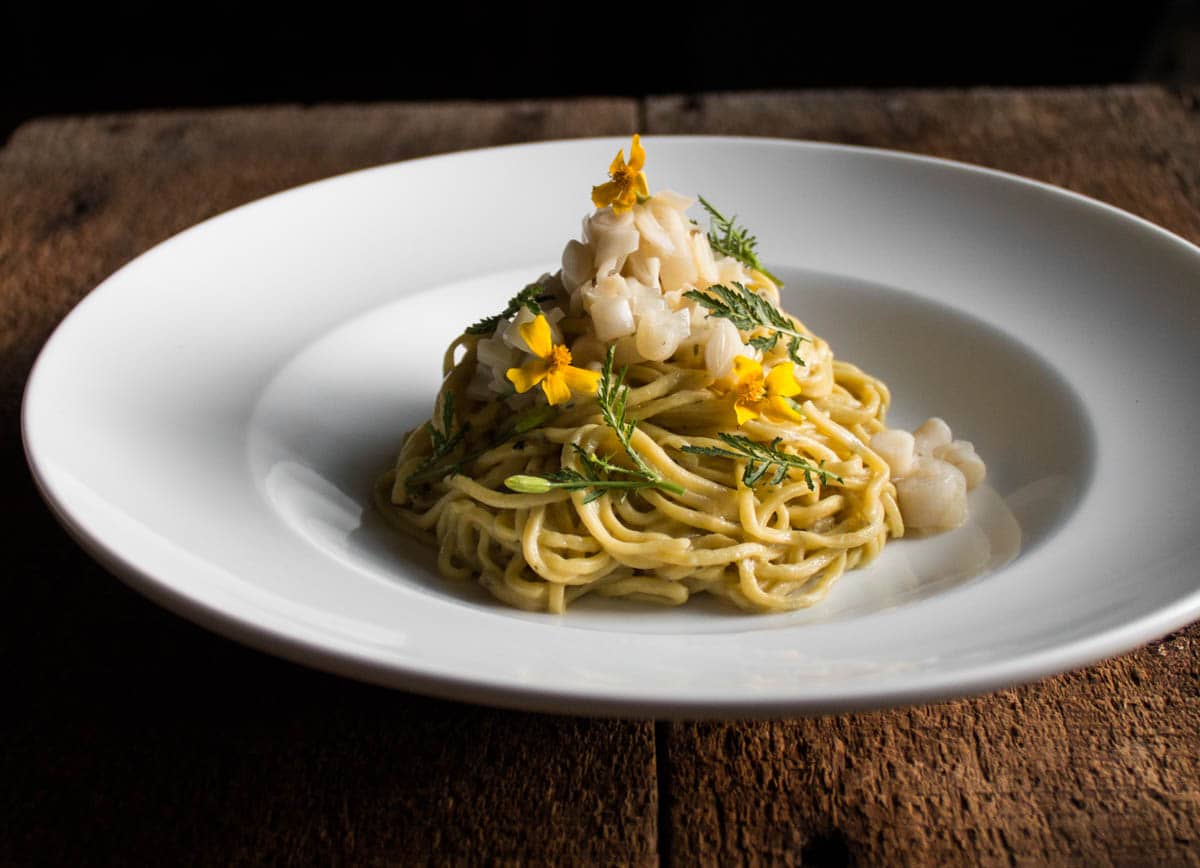 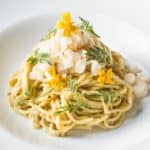 See the recipe for the duck egg-wild herb pasta here.  Yes that is 4 tablespoons of butter for an appetizer for 2 people. Also, if you harvest pollen I like to keep it in the freezer until you need it to preserve it's life and flavor, a plastic ziploc works for me.

END_OF_DOCUMENT_TOKEN_TO_BE_REPLACED 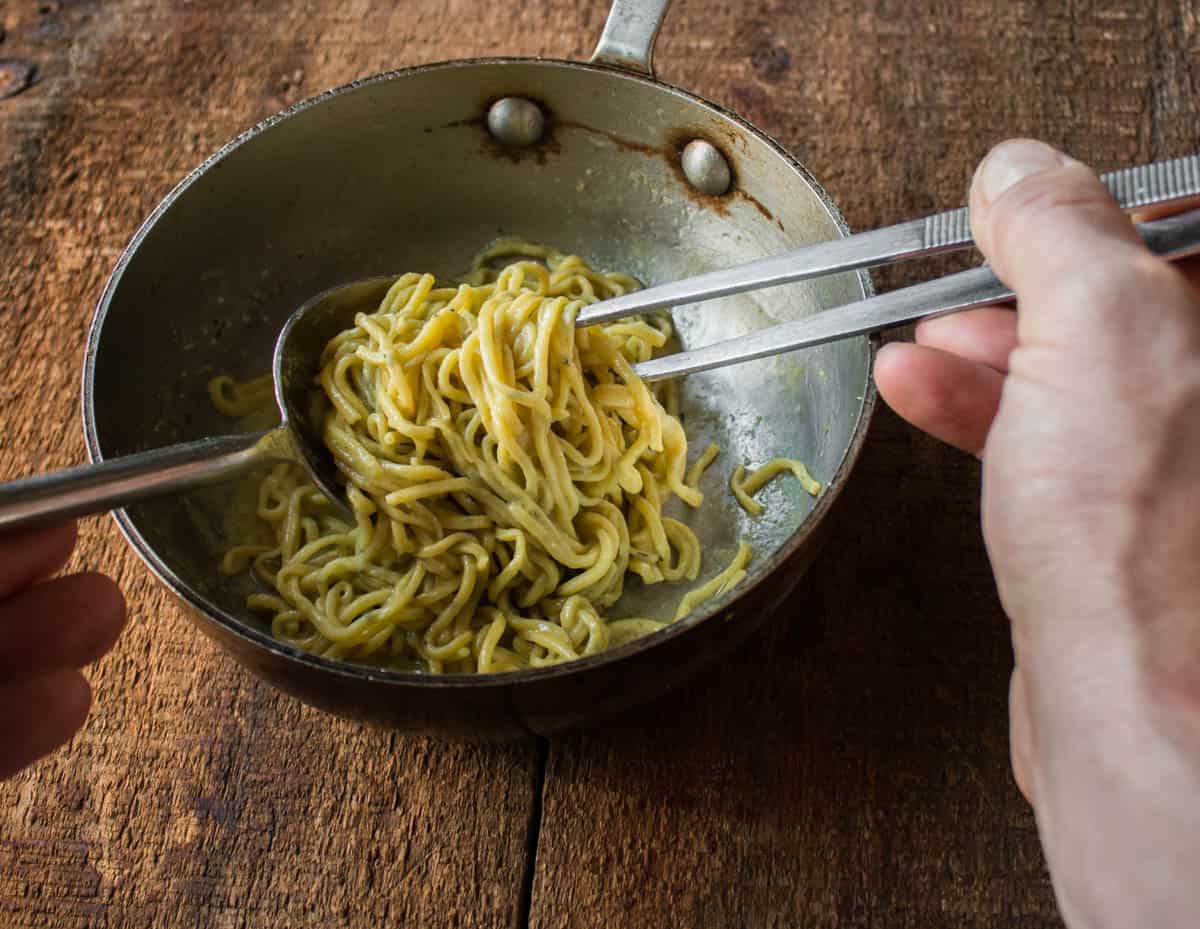 Pasta plating pro tip: spin the pasta with tongs gently to coat it with the sauce and help it stand into a mound and give the plate volume.