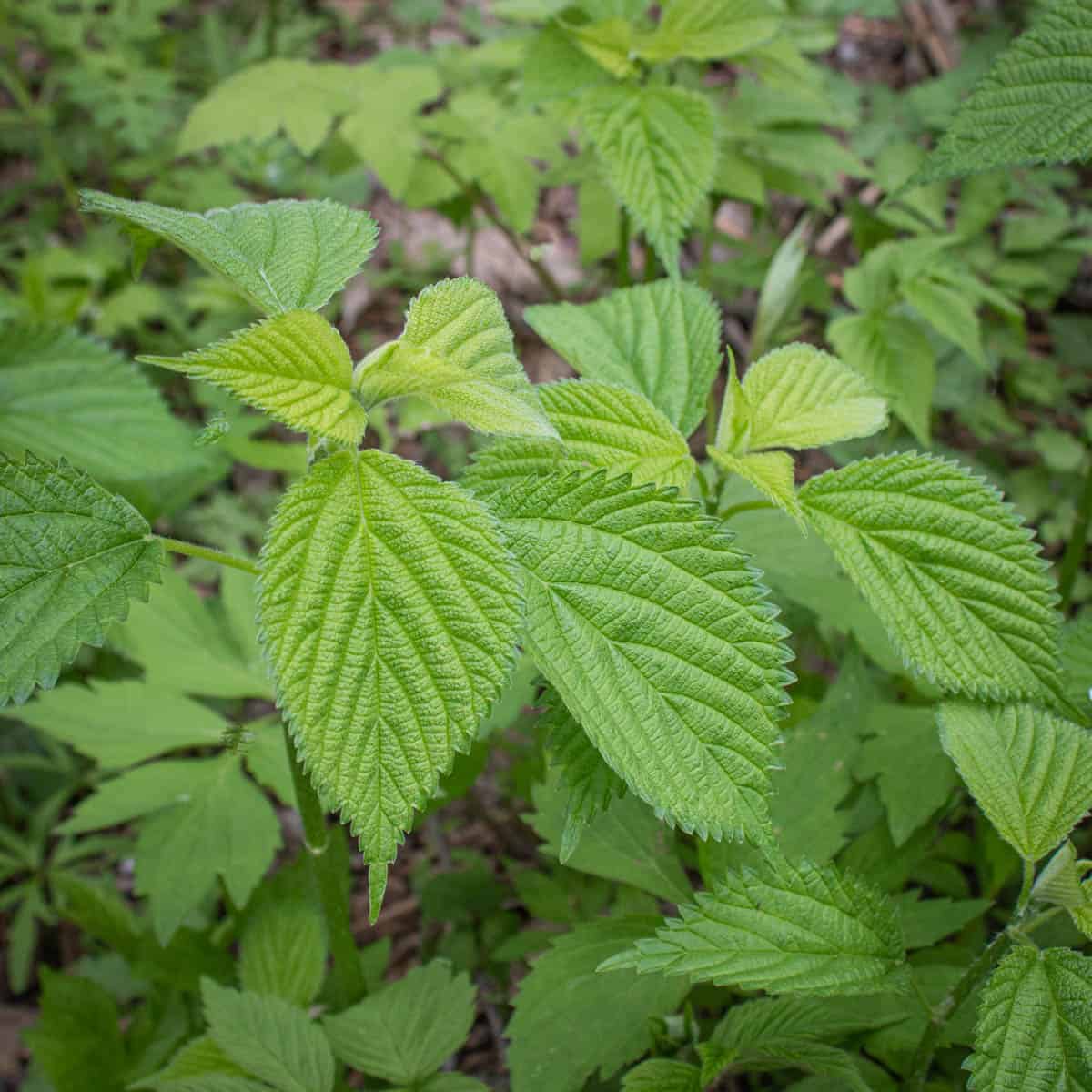 Young wood nettles, at the best stage for eating.

If you know and love stinging nettle like I do, you’re going to love wood nettle or Laportea canadensis, for a couple different reasons I’ll get into, not least of which is their flavor. First though, I think it’s interesting to know some of the different characteristics that differentiate it from the nettle most people know: stinging nettle, or Urtica dioica. 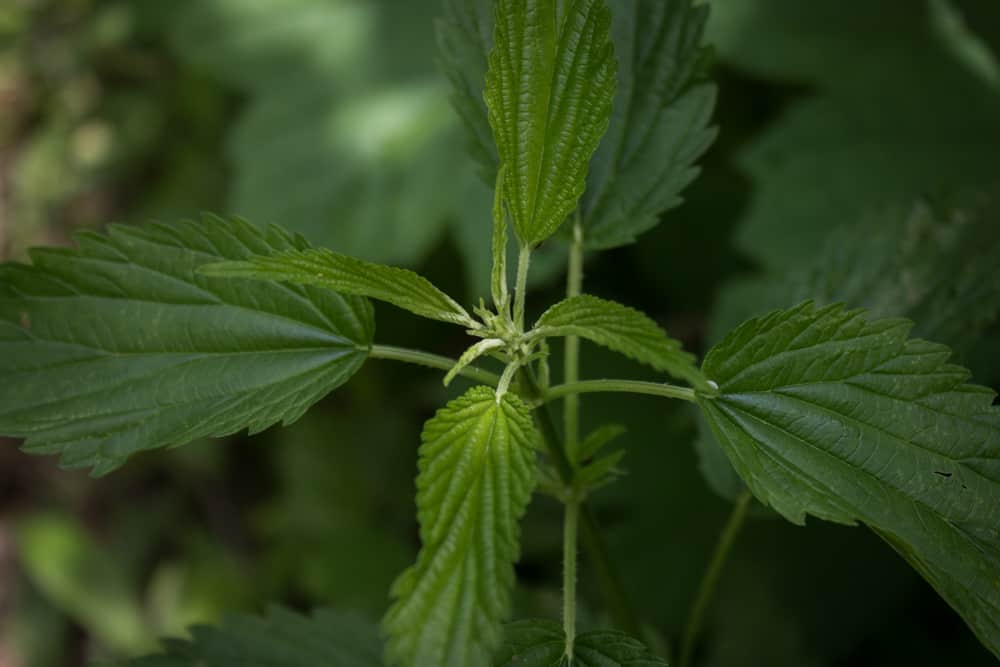 Stinging nettles have a more prominent place in American culture, although saying prominent is being really, really generous as most people still consider them annoying weeds. One, and likely the biggest reason for that is stinging nettles have been enjoyed in Europe for a very long time, and when immigrants from Europe came to America, they brought with them their culinary knowledge of plants. 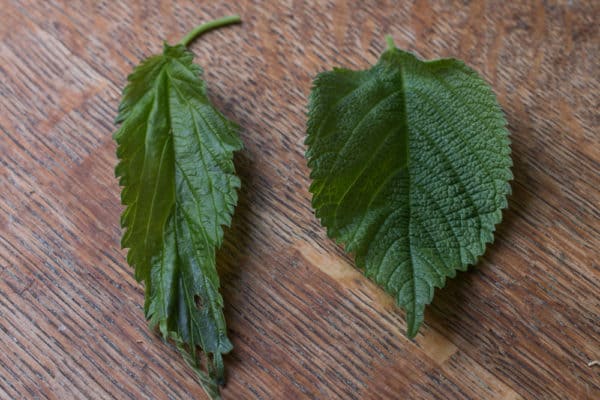 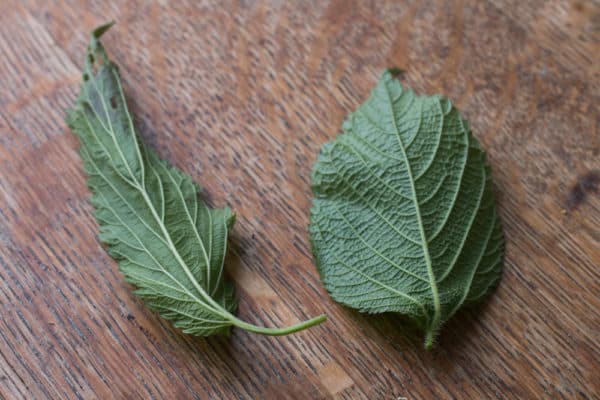 As the traditional nettle cooked in Europe was Urtica dioica, it naturally became the nettle of choice, since it was the only nettle they knew. This makes total sense, but those early immigrants were missing out on our Indigenous North American nettle (wood nettle).

The good news is you don’t have to pick just one, you can enjoy both. 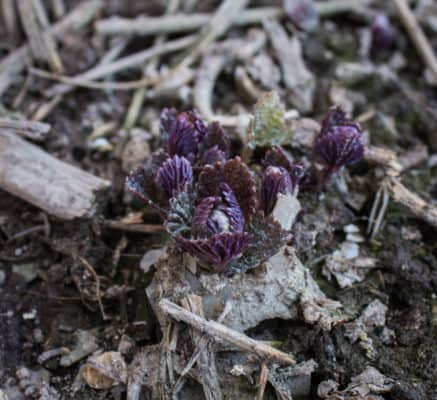 Young stinging nettles may come up purple, a natural resistance to frost. This is absent in young wood nettle.

One of the best reasons for getting to know this plant is that it will expand the amount of wild greens you can pick and harvest. Stinging nettle is one, if not the very first plant I cook each year in the spring. Wood nettle does us a solid by maturing later, so as stinging nettles begin to grow tall and tough, the wood nettles are at a great stage for eating, although there are a usually a good couple weeks of overlap where you can cook the two together. 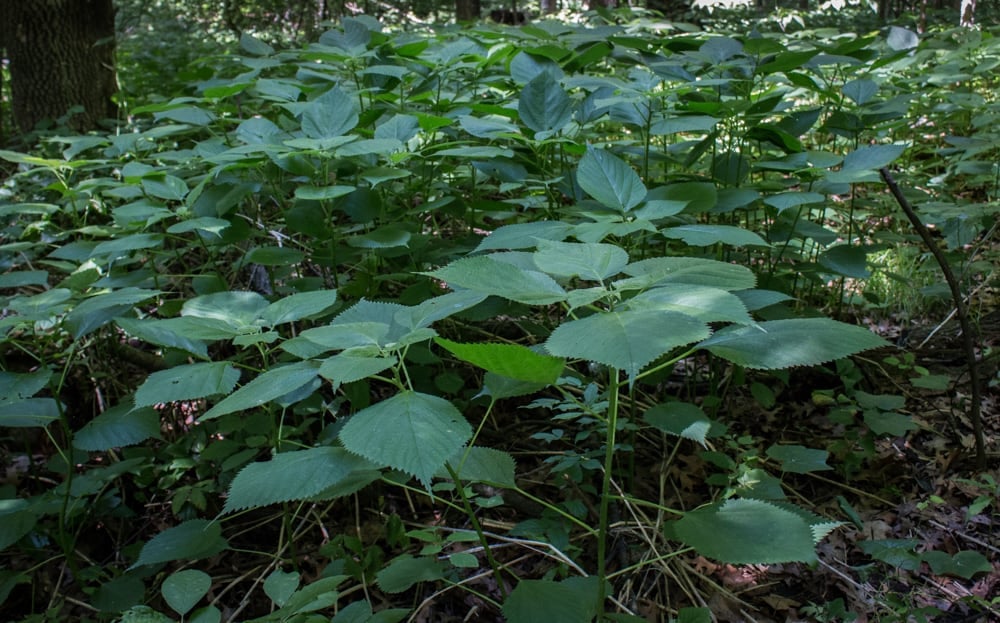 Wood nettles can grow in very large stands. These are still edible, but I would chop the greens up after cooking.

This is another reason to look for these. Stinging nettles have a certain flavor that increases with their age, it’s a sort of almost fishy, saline quality. I like the taste, and it’s actually very important in my nettle soup as it plays off the garnishes that love a little oceanic taste: quail eggs and dill, and sometimes herring caviar if I have an expensive dinner coming up.

“Wood nettle is like a deep, rich spinach of the woods” 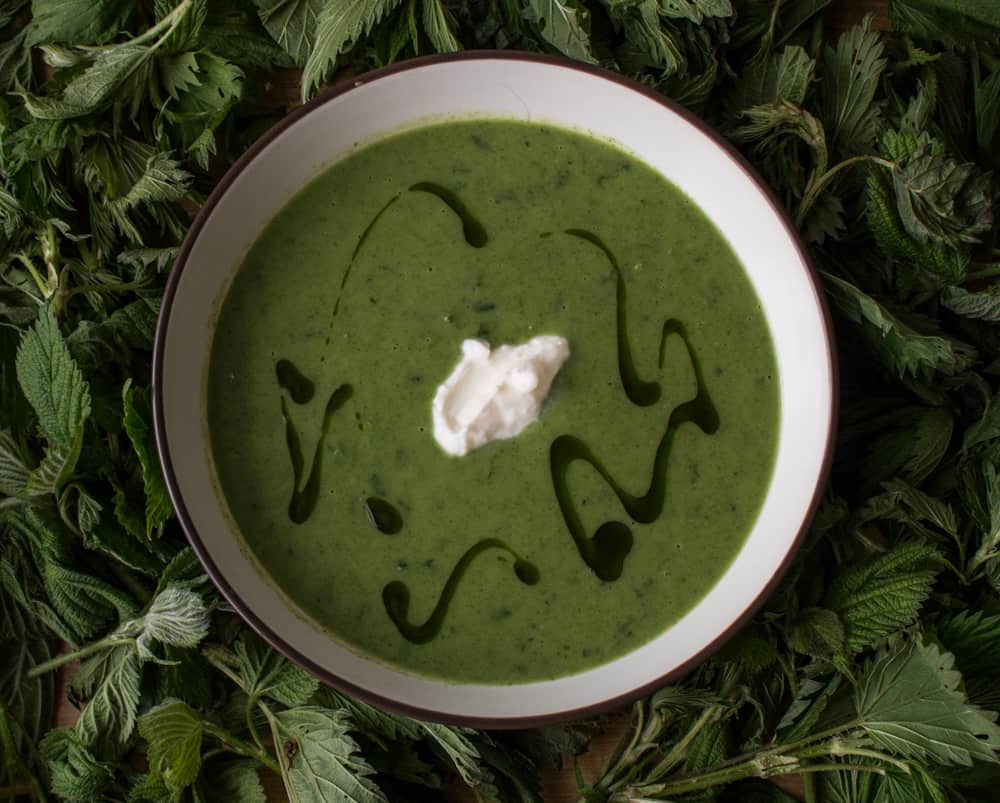 Wood nettles and stinging nettles make an excellent soup: one of the most traditional ways nettles are enjoyed.

While I like this taste stinging nettles have, it can be too strong for some people, especially when it’s older, but with wood nettle there is nothing to worry about. The flavor of wood nettles is like a deep, rich spinach of the woods. It’s verdant, tender, mild, and almost like a little vegetable when you cook the whole, small clusters of leaves and stems together. Even when wood nettle is mature, in the later stages where I would still pick it before it produces seeds, it’s nothing less than mild and delicious. So, if you’ve tried stinging nettle and were turned off by a strong flavor, give wood nettles a shot, you’ll be pleasantly surprised. 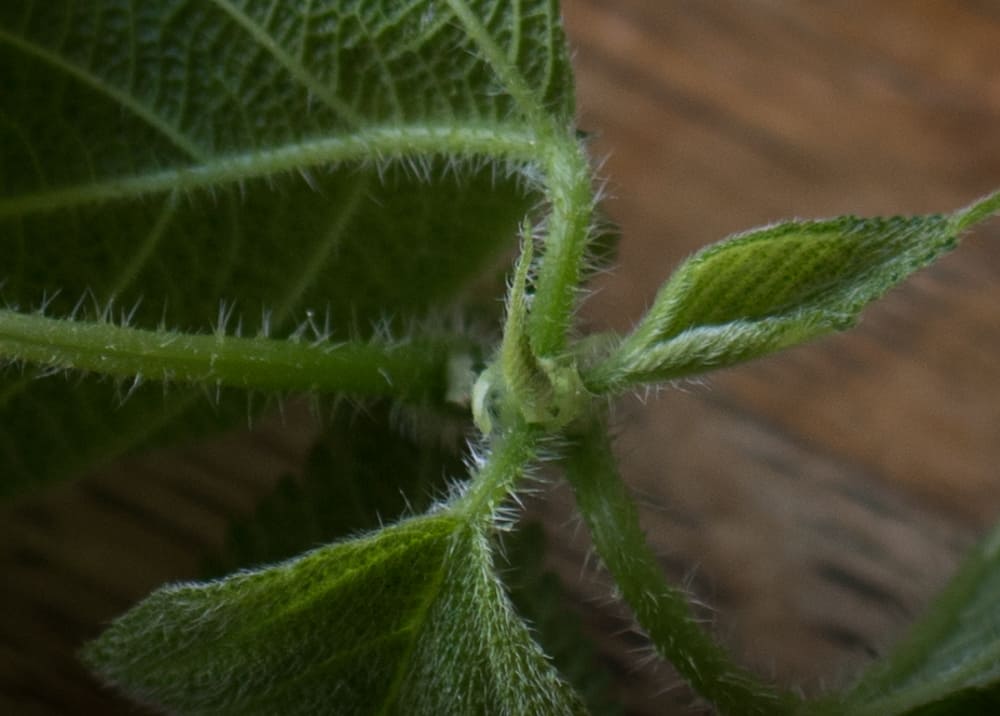 Wood nettle has way more stingers than stinging nettle. I use gloves to harvest them.

The only thing wood nettle has more of than stinging nettle is in the sting, literally. I have no problem picking stinging nettles carefully by hand, wood nettles are a different story though. The stingers are much more pronounced, especially as the plant ages, and unless you are very dextrous and careful (it can be done by only touching the middle of the leaves) you’ll want to wear gloves when you pick these, at least on one hand. The stingers are so pronounced that they will go through clothes, even my heavy duty foraging pants, something that rarely if ever happens when I pick stinging nettles.

I like to use a scissors to clip the young tops of the plants, or the shoots when they’re young. I put the leaves in a paper bag, then bring them home and refresh in a sink of cold water. After they get refreshed in the water, they get thoroughly dried (this is important, if there is too much moisture left over from washing the nettles will disolor and go bad rapidly) and put in a plastic zip loc with a damp towel and a hole punched in the top for air. Kept like this, wood nettles will keep for at least a week or two in your fridge: a wonderful shelf life for fresh greens.

To cook wood nettles, treat them just like stinging nettles. There’s two options here, blanched, or cooked from raw, depending on what I’m doing I like both preparations.

To blanch wood nettles for freezing or storage

Blanching is useful if you want to freeze your nettles, or if you want to just free up some space and process and hold mass quanities of greens, like I often do during the season. Here’s the method:

Have a cold water or ice bath ready. Bring a stock pot half full of water to a simmer, then add salt until the water tastes like the sea. Working in  batches, put the nettles in the simmering water using tongs or gloves for a about 30 seconds and stir until they’re completely wilted. Remove the nettles to the cold water to chill, then repeat the process with the remaining nettles.

After the nettles are all blanched, squeeze the water out as much as you can, then transfer to a labeled, dated contiainer and refrigerate or freeze until needed. It’s very important to use salted water, blanching food in unsalted water will have a much shorter shelf life as well as making things taste better.

Why are my blanched nettles dark?

The nettles need to be blanched for at least 30 seconds. Underblanching can result in the chlorphyll green not being locked in, resulting in splotchy dark spots, or nettles that are completely brown, and not green. Not shocking nettles in cold or ice water can also cause this.

To cook wood nettles from raw

Take your washed, dried wood nettles and, using gloves or tongs put them into a wide pan with a lid, add a little butter and stock, salt and pepper to taste. Cook, covered until the nettles are totally wilted and hot throughout, about 4-5 minutes, then drain and serve. My favorite preparation is to glaze them with butter and their natural juices. 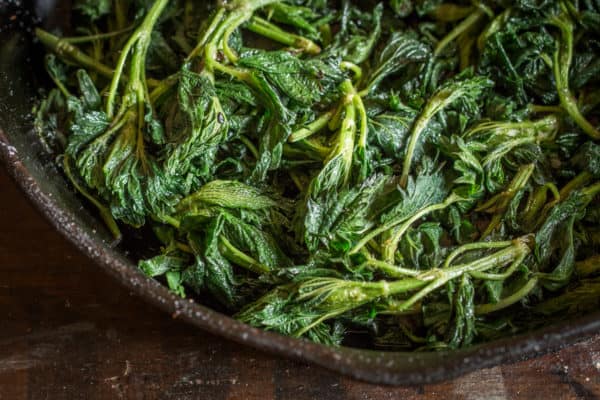 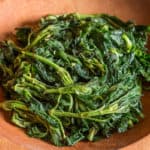