Around September each year, I'll start to look for Shagbark hickory nuts (common hickory or Carya ovata)-one of my favorite things to forage in the fall.

They may be smaller than black walnuts and butternuts, but the flavor and versatility in how they can be used makes them more than worth the effort they take to gather. 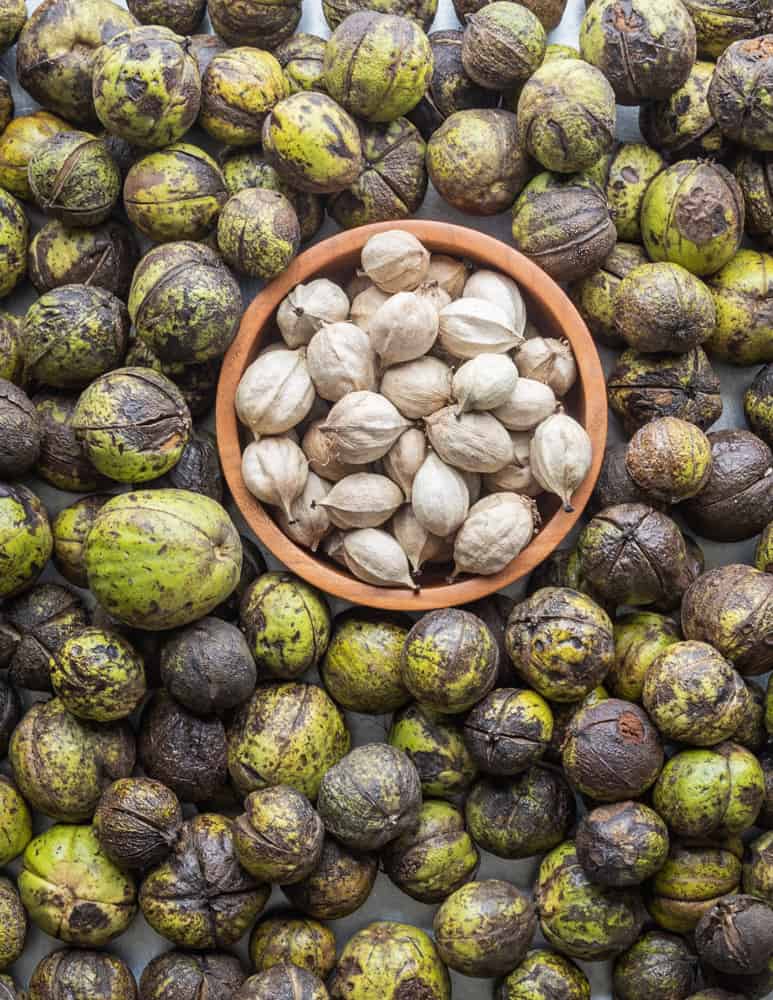 In this post I'll share everything I've learned about them over the years: hunting, harvesting and processing, and a few of my favorite recipes and uses.

A Few Types of hickories

Hickories are related to pecans and are in the genus Carya. There's a number of species in North America. Sam Thayer say about 11, depending on how the species are separated, other resources I've seen say as many as 18. Here's a quick list of a few varieties you might see brought up in conversation:

For the purposes of this post, I'm only going to discuss shagbark hickories in depth, but as I have images of some of the others, I'm including them to help if you're new to these. For reference on size and shape between a few varieties see the picture below.

Other species I've had beside shagbarks typically have much thicker shells that make them more difficult to crack open.

Bitternut hickories are the exception as they have a thin shell, but the nut meats are bitter and only really good for pressing hickory oil.

Shagbarks have a thick husk and shell and taste good. Even so, newcomers often confuse the two, until they eat them.

Possibly the ultimate hickory nut, Laney's hickory is a cross between a shagbark and a bitternut.

They have the thin shell of a bitternut hickory, but none of the bitterness. They're the best of both worlds. See the comparison below. Nature is fascinating!

Shagbark hickory trees are one of the easiest trees to learn to identify. Here's a few quick tips.

In order to get a good crop, you'll need to find a good patch of nut trees. To be very clear, I don't bother checking hickory trees in woods as the trees don't get as much sun, which means they won't make as many nuts.

Squirrels and deer also get nuts in the woods faster than in open areas. Ideally, you want trees that get lots of sun, and are in a relatively open space. A tree in a friend or relative's yard is ideal.

Here's two other things I may look for depending on the location:

1. Trees on the edge of the forest

Trees on the edges of woods can be great as squirrels will be less prone to take nuts in areas that leave them exposed to predators (like eagles and hawks).

Hickory trees, like their cousins in the Juglandaceae (black walnuts and butternuts) have a variable rhythm in which they produce nuts called a masting cycle.

Some years trees may not seem to produce any nuts at all, some years there will be large amounts. Your job is to find trees that are masting, at the right place, at the right time.

To hedge my bet, I often scout for nuts before they're ready to drop. I take a pair of binoculars and go to my patches, scanning the canopy of the trees for nuts which will appear as yellow-green orbs on the branches.

When I find trees that seem to have a good crop, I set a reminder to come back in a few weeks when the nuts begin to drop.

I harvest hickory nuts mid-to-late September through October where I live, although I've read they can start a month later in the south.

When I suspect the nuts are ready, I go to my patches I've scouted. In a perfect world I'll see freshly dropped nuts still in their green outer husk as I walk through the woods, and I'll probably hear nuts falling from trees all around me as I pick.

Unlike black walnuts and butternuts, hickories won't stain your hands when harvesting so there's no need to wear gloves.

Some nuts will fall early-avoid all of these. Trees may reject nuts for a number of reasons, typically the ones I see that fall early are nuts that have been aborted for some reason, or those that have insect damage.

While you're harvesting, it can be tempting to pick up all the nuts you see, but you should resist the urge. Carefully inspect the nuts as you pick. Over time, you should be able to see the differences between freshly dropped nuts and those that may have dropped earlier and aren't good for eating.

Hickory nuts are a living thing, and living nuts that could make a tree are the ones you want to eat. Look for nuts in a green husk that remove easily when handled. It's common for good nuts to fall out of the husk on the impact of hitting the ground, so grab those too.

One rule to always live by is to always avoid discolored nuts, any nuts with holes in them, or nuts that don't dislodge easily from their husk. If you pick everything you see you'll probably have to throw half of your harvest away.

After the nuts are harvested, I bring them home and remove them from their outer husk. After all the nuts are removed from their husk, I will float them by putting a gallon of nuts in a bucket with about 4 gallons of water. Any nuts that float I will discard as they're probably compromised in some way.

It's important to understand that only fresh, and not dried nuts should be floated, as dried nuts will always float.

This can be confusing since some nuts can dry naturally on the ground as they wait to be harvested, which is another reason to try and get the nuts as they're falling at the same time from the tree.

As you harvest avoid and discard any nuts that have holes in them, as that means bug damage and no nut inside. Hickory grubs (Curculio caryae) are the most common pest I see.

Bugs and pests can move through a harvest of hickory nuts if they're not processed quickly, so make sure to process your nuts quickly after harvesting to avoid loss. Once the nuts are dried and stored I've never had any issues.

After the nuts are removed from their green husk, I set them out to dry on sheet trays in my garage with a fan blowing on them.

I find drying the nuts quickly helps to curb any bug damage, and is much faster than allowing the nuts to dry in a bag or gunny sack.

Using drying racks takes a little space, but if you harvest wild food it's a great setup for drying things quickly and efficiently, and that goes for any nut I harvest-not just shagbarks.

Once the nuts are dry, which takes about a week, I put them in a bus tub and freeze them. From there they will last indefinitely and I pull them from the freezer to crack and process as needed.

Unlike other nuts I harvest like black walnuts and acorns, dried hickory nuts can only be stored at room temperature for a few months-potentially longer if you have a cool dark place.

If you've stored hickory nuts at room temperature, crack them and they smell rancid, discard them as it only takes one to ruin a dish.

Most shagbark hickory nuts I see are about an inch wide, but some are smaller. Whatever size you have, know that getting them to crack them open without crushing the nut meat is a learned skill.

Admittedly, I'm not very good at cracking them yet, but the Grandpa's Goody Getter nut-cracker has a hickory nut attachment some of my friends have used with good results.

The old-school method Sam Thayer described to me for cracking hickory nuts involves striking the nut shell on the wide side in a way that makes an X. Using a hammer, put the nut on a flat surface and strike it lightly.

Ideally, there will be three or four fissures, which will make removing the nuts from the shell easier.

Using a nut pick and snips

If you want to crack them the old-school way, you'll also want a nut pick and a snips. Sam Thayer showed me how to make a homemade nut pick by flattening a nail and putting it into a piece of wood.

The thin, flat blade of the homemade nut pick is ideal for removing delicate meats from many wild nuts.

When cracked and perfect, hickory nuts should tastes buttery and delicious like a pecan-never rancid, stale or musty. Fresh from the shell, there's no need to toast them.

As they have a short shelf life, after shelling they should be stored in a fridge or freezer (a glass mason jar or bag is fine) if they won't be used right away. If I'm pulling shelled nuts from the freezer, I'll usually toast them lightly to refresh them.

The cracked nuts can be used anywhere you'd use pecans. Hickory nut pie is a classic, but you'll need a couple cups of nuts. If you only have a few, they're great just eaten out of hand or sprinkled on a salad.

A few ways I use the finished nuts

Kanuchi, an indigenous method of bashing the nuts, shell and all to a rough mash before simmering in water to make nut milk is the most ingenious method of processing hickory nuts I know of as you get to bypass the tedium of shelling the nuts. It's by far my favorite hickory nut recipe.

This is my go-to method for enjoying hickory nuts since I usually have other nuts to shell that are easier during the winter. For more on Kanuchi and traditional hickory nut milk see the link at the bottom of this post.

Besides the delicious nuts, shagbark hickory wood and bark is also used in cooking, typically for making hickory syrup or smoking.

The syrup is so well liked by some people for it's smoky, hickory flavor that small farms and companies have started to sell it and you might even see it at farmers markets. Harvesting the bark is another thing to keep in mind if you visit your patches and don't find any nuts. 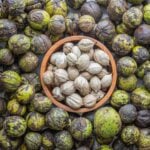 A quick tutorial of how I harvest and process shagbark hickory nuts.

« Pasta alla Checca with Wild Mushrooms
Chefs vs Wild: Behind the Scenes »