A smoky, sweet syrup made from toasted hickory bark, shagbark syrup has been a forager's secret for a long time. It's a bit like a hickory nut recipe without the hickory nuts, which also means it can be something useful to make on years when the trees aren't producing enough nuts to gather, since bark is always available.

I've been seeing the syrup creep its way into farmers markets as an interesting value-added product in recent years. Today I'll describe how it's made, and what you can do with it.

Known as a kind of maple syrup substitute, shagbark syrup, unlike other tree syrups made from sugar maples and others, is made from a tea or infusion of roasted hickory bark (Carya ovata is the only species I use) and sugar. The finished syrup tastes good, but I think it's important for me to tell you it's more of a "poor man's maple syrup" and definitely isn't worth as much as the real deal.

Bark isn't something that we often think of as food, so it's important to go over a few things. Here's a quick list.

You must harvest bark from a living tree to make this. It should look clean, and be free of moss, spiders, mold, and other things you wouldn't want to eat.

After you've harvested your pieces of bark they should washed and scrubbed with a brush to remove any excess particles that could get into the syrup (you'll strain it too so don't worry too much). After cleaning, the bark is roasted which gives it a nice toasty, slightly smoky flavor.

I don't think this is a huge issue, but it is worth mentioning. Shagbark trees have lots of shaggy bark to spare, but I think it's good to mention that you shouldn't harvest heavily from a single tree. Make sure that you're harvest isn't noticeable to the naked eye, and that you're not harvesting heavily that could leave the tree vulnerable to pests and molds.

How to make the syrup

To make the syrup, you take your cleaned, roasted bark (half a pound of bark is plenty and will make about 4 cups) broken into pieces a few inches long, add water to cover in a large pot and simmer for an hour to make a smoky hickory bark tea.

Afterward the tea is strained, mixed with an equal volume amount of sugar, and simmered until the simple syrup reaches 225 F on a candy thermometer. That's it.

After the syrup reaches the proper temperature, you can pour it into mason jars, top them with a lid and store in a pantry. The finished syrup is great and a good way to start using it is in place of maple syrup on pancakes or used to flavor custards and ice cream.

Crystallization can happen in the syrup if it's cooked too long and reaches a temperature over 225 F. Some people will tell you to use corn syrup to help it not crystalize (long story it's an invert sugar and helps things to not crystalize).

I can't stand corn syrup and try to avoid it whenever possible, so I only use cane sugar here. If your syrup crystalizes after it's chilled, just microwave or warm the jar up to refresh and melt it. 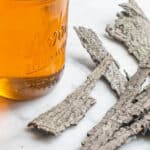