When I saw my first butternut I had the same thought plenty of people have probably had: “that’s a weird looking black walnut”. They’re not black walnuts though. They’re butternuts, and in Minnesota, it’s illegal to harvest them, or even possess them—more on that later.

Butternuts, also known as white walnuts (named for the light color of their wood) are cousins to black walnuts, so it’s been helpful me to learn about them by contrasting the two. Both nuts share the same genus: Juglans cinerea and Juglans nigra, respectively, and, at first glance, they look similar, as both nuts come in a green husk that will stain your fingers. Their shape is different though, as butternuts are much more ovoid than circular, a bit like miniature footballs. While black walnuts can be a little annoying as they’re prone to stain things, butternuts don’t seem to be as bad in that regard, but they make up for it by being covered in sticky hairs, that, once you notice are hard to forget. 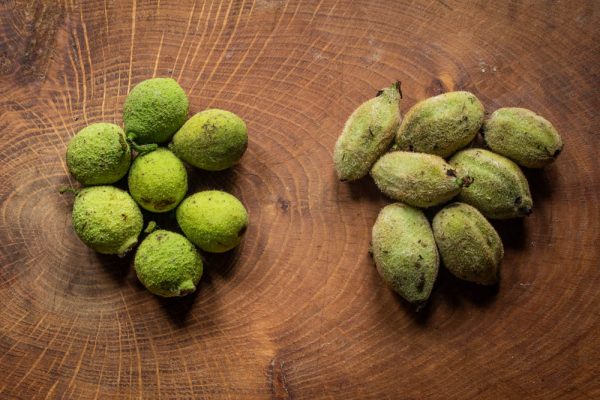 Unripe black walnuts (left) and butternuts (right). Butternuts will be very stick, if you zoom in you can see the hairs. 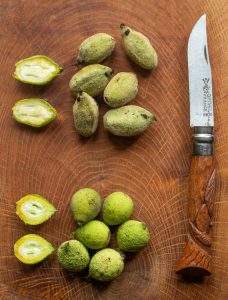 But, the biggest difference has to be in flavor. Butternuts have a smooth, mild buttery taste, and the ones I’ve tasted lack the stronger tannins I can get from skins of English walnuts from a store. Freshly cracked ones, raw or lightly toasted, make for excellent eating. Black walnuts, on the other hand, have a strong, aromatic flavor I describe similar to menthol, musk, and earth—truly it’s own taste. I love black walnuts, and could eat them by the handful, but the taste is so powerful many people strongly dislike them (the true sign of a delicacy, amirite?!). Butternuts have a mild, creamy taste anyone will love, and if you like regular walnuts, you’ll like them, but first you’ll have to find some. 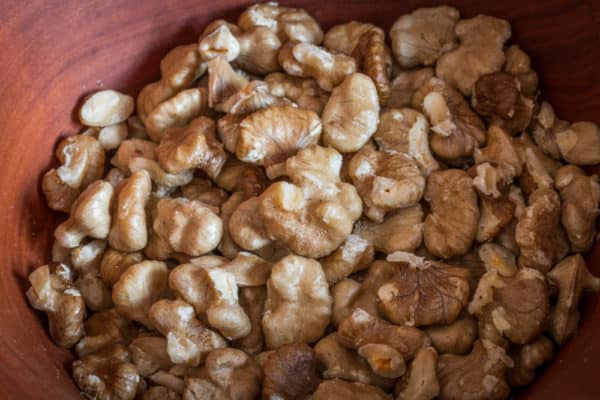 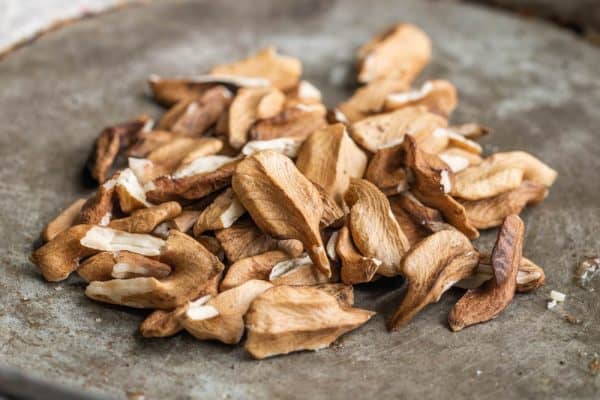 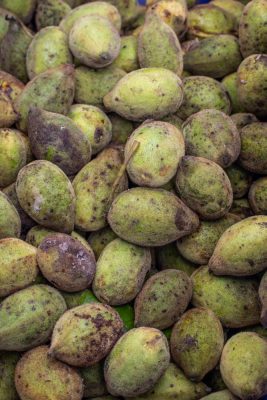 Freshly harvested butternuts will bruise like black walnuts. From here all I did was let them dry in a cardboard box in the garage.

The tricky part is that butternuts drop early. Typically about a month earlier than black walnuts, falling around September where I live. Most of you will be familiar with seeing black walnuts rolling around in the fall, but I’d never seen a single butternut on the ground, only on the tree itself, until Sam Thayer took me along time scout for some on the farm. We harvested butternuts, but not by collecting nuts already fallen like you might black walnuts.

To get the butternuts, Sam climbed a tree to a height that made me nauseous, shook it with a sort of preternatural skill, and made it rain down an artillery of green mini-footballs. I couldn’t believe how many gallons we picked up from just two trees! The simple act of shaking a choice tree, at the right moment, and making it rain down food, was a sort of command of nature I’d never imagined. Just two modestly fruiting trees gave us 3 gunny sacks filled with enough butternuts to burden three grown men. 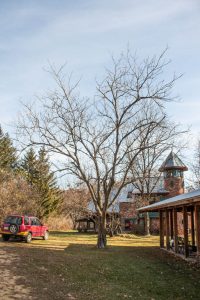 A butternut tree in the front yard. Note the width of the crown, which should generally be wider than black walnuts, and is a great way to tell them apart from a distance. 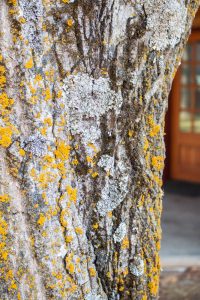 A close up of the bark on the same tree. It’s not looking too hot, but it’s a strong old buzzard!

One helpful trick Sam mentioned to me to make ID easier is a general rule I’ve never heard anyone else talk about. For the most part, with exceptions, butternut trees are generally taller than they are wide, and black walnut trees are wider than they are tall. This can really help pick you pick them out from a distance. 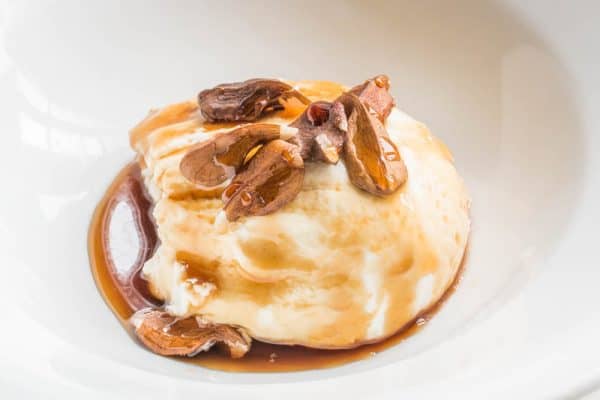 I like to show off the butternut shape in minimalist preparations. One of my favorites is sprinkled on yogurt cheese with pine cone syrup or mugolio.

The Squirrels nut of choice

Just like black walnuts, butternuts do fall off the tree by themselves, but I’d never noticed a single butternut on the ground, and If you’ve never seen one either, don’t worry, you’re not blind. Jokes about squirrels and nuts abound, but I’m dead serious when I say squirrels seem to prefer butternuts above all other nuts that I’ve seen. It’s a thing. With black walnuts, I see squirrels bopping around with them here and there, but they seem to pick them more leisurely. Butternuts, by comparison seem to evaporate off the ground as soon as they fall without a trace—not a single one seems to be left unless I go to a certain tree in town I know of, the exposure to predators and other things probably making it more difficult for the professional nut harvesters. Butternuts exist though, and if you beat the squirrels, they can be yours.

Another reason you might not see butternuts is because of the disease that affects them. Butternut canker, a sort of fungus that attacks the trees, is bad news, similar to the blight that hit American chestnut trees as far as impact–not a good thing if you’re a butternut tree. Some trees I’ve picked from seemed to have a good resistance though, and if you look closely you can see the scars on the trunk to prove it. Unfortunately, the losses in Minnesota are bad enough that the tree has been listed as “of special concern” since 1996, and is now considered endangered, and, in a nutshell, that’s why it’s illegal. 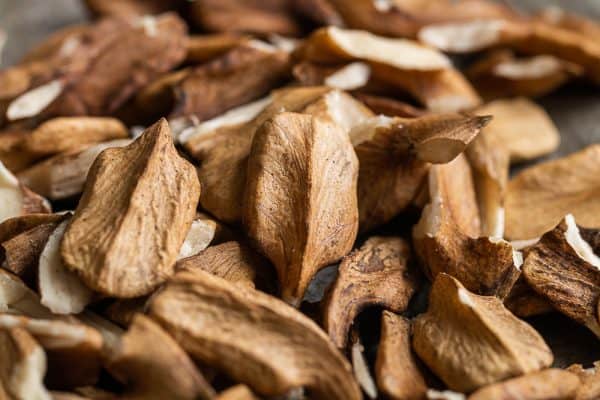 One of the best parts about butternuts is their unique paddle shape.

I couldn’t believe that a food plant so reasonably well known in the wild food community could be illegal myself, so I called the Minnesota DNR and, after a number of calls over the span of a few months, I finally got the answer. Essentially, listing it as an endangered species invokes the full legal the full legal protocol making it completely illegal to harvest or possess the nuts. Don’t gather the nuts, pick them up, move them, eat them, plant them, or, drive around with some in your car, unless they’re in a secret compartment. That’s right, even if you wanted to plant the trees, be the Johnny Appleseed of butternuts, you could technically be facing jailtime, a felony and all the trimmings that go with it, including the loss of your voting rights. 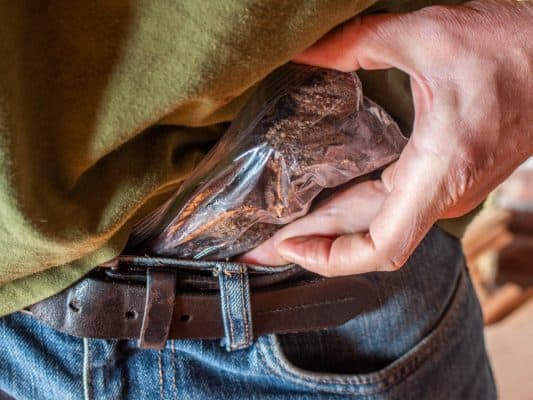 When traveling with butternuts across state lines into Minnesota, try to hide them in a place the Police won’t look. Here I’m using the old school “He’s got nuts” method.

The law here is obviously overkill, but I can understand the intent. Plant gets blight disease that slowly destroys it? Put it on the endangered list–easy as, pecan pie, right? It seems to me like a knee jerk reaction that had unintended consequences. At least to me, there’s a stark contrast to someone possessing the edible fruit of a tree, one that’s harvested in quantity and legal in the surrounding states, to possessing something like a boreal owl, destroying the den of a timber rattlesnake, eating bald eagle egg omelets, or gathering other vascular plants that are endangered for some purpose, as in the case of the ginseng black market.

Not even the state can possess the nuts for propagation 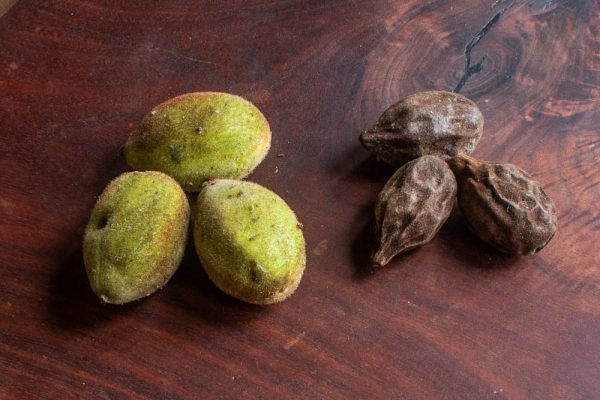 When you pick the nuts up off the ground, unlike black walnuts, butternuts won’t be mushy and wormy–the hull will hold their shape. With black walnuts, I like to roll each nut over with the heel of my shoe to remove the softened green hull as I pick, but with butternuts, I haven’t found that necessary at all–I just pick up the nuts and put them into a breathable container (a cardboard box has worked fine the last two years) and set them in a place where the squirrels can’t get them, like a garage. After a couple months, the nuts will be dry, then they can be cracked, or, squirreled away for year. 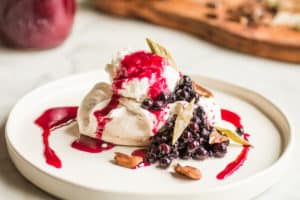 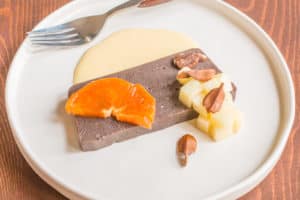 This is the fun part, and for me, really challenging at first. I was so excited to find butternut trees so close to me, but after curing, my first few attempts at cracking them were embarrassing, to say the least. Just like other ancestral skills, cracking butternuts and black walnuts is a learned skill, and it takes practice to not smash the nuts to smithereens. I waited to share this until I could dependably get whole nut halves by myself, and I hope the quick video below can help illustrate the process. 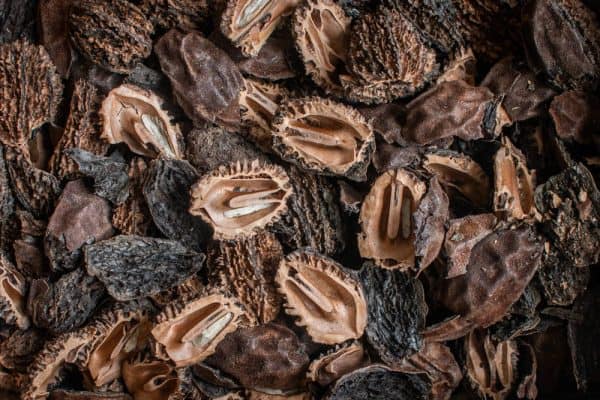 With any luck, you’ll be able to get butternuts to crack into even halves, giving you near perfect paddle-shaped nuts.

Basically, you have to first whack the nuts so they shed the dried black hull, after that, I hold them vertically preferably on a really firm surface, like a big stone and give them a whack, striking as “true” or as straight as possible, until I hear the audible “crack”, just like black walnut. Unlike black walnuts, butternuts only have two halves, so once I got the cracking part down, I’ve actually found them a bit easier to crack than black walnuts, which, in a perfect world, I can probably get 4 quarters from. A tin snips can help spot treat the nut shells to help release the nut meats on difficult nuts, and is, yet again, another great trick passed down from Sam.

In Defense of Plants Butternut Podcast with Andrea Brennan, graduate research assistant focusing on butternuts and how hybrids could help save the tree from butternut canker.