This is now my all-time favorite cauliflower mushroom recipe: cut into big chunks, and cooked as a mushroom substitute for meat. Read on and I'll explain how it's done, and why.

The volume that cauliflower mushrooms lose isn't necessarily a bad thing, it's just a by-product of their structure that makes them unique. I couldn't help but wonder though, if there might be a way to cook them as a center of the plate item as I do chunks of hens.

Now, you could always dip them in batter and deep fry them, which would definitely hold their shape, and would be good, but I don't often deep-fry things at home. I wondered if the mushrooms wilting couldn't be used to my advantage, so I took a few big hunks and steamed them.

After that I seasoned them, and dredged the mushroom noodle-patties in flour to ensure they got a crisp crust.

The finished product is excellent, and one of the best recipes for cauliflower mushrooms I've tried yet. Unlike the hen of the woods steaks, the cauliflower steaks, cutlets, or whatever you want to call them aren't giant hunks of food, they're more along the lines of a cutlet or thin escalope, but that's a bit of a moot point.

Napped with a little pan sauce with lemon zest and capers, no one will care about a little creative license in the description here. 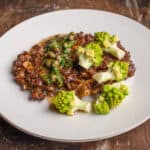 To finish and cook the mushroom “steaks”

*All purpose flour could be anything here that will absorb fat and get crisp: cornflour, buckwheat flour, wild rice flour--take your pick.

END_OF_DOCUMENT_TOKEN_TO_BE_REPLACED

« Butternuts / White Walnuts
How to Dry Age Venison at Home »