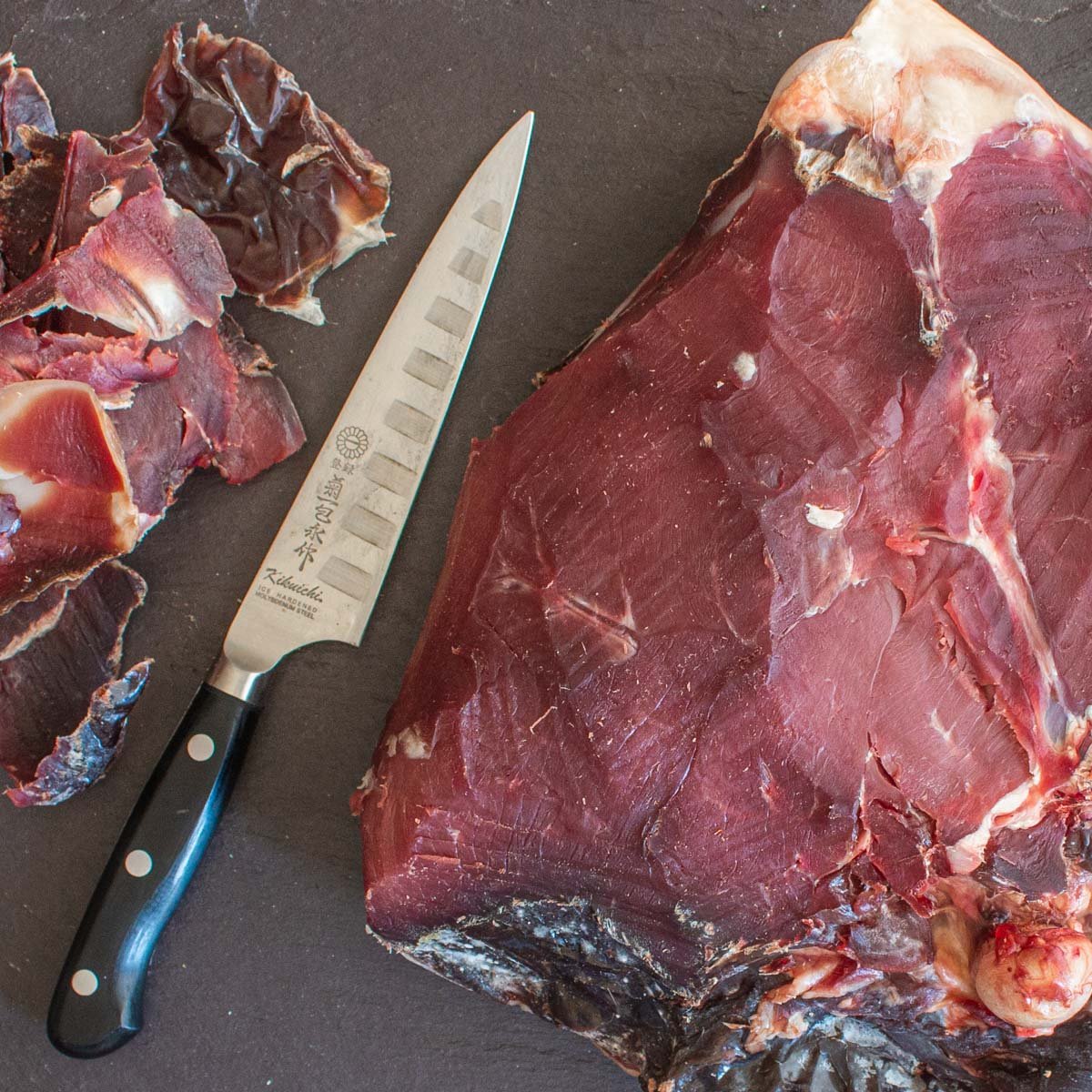 Got a special occasion coming up, or a holiday celebration? Hunter in your family shoot too many deer and you're running out of space? If you like meat projects, dry-aging them is a good one to add to your repertoire.

By now, most people have heard of dry-aged meat, and, if they haven't tasted some for themselves, they've probably seen the price tag: 99.95$, 150$, 240$, even a staggering 390$ for a steak big enough to serve 2 people are all prices I picked out from a few restaurant menus.

I used to run a steakhouse, and spent months researching everything from genetics to steak anatomy and price models before I started purchasing beef in large shipments (I bought 8000$ of beef for the opening week of the restaurant), so I know a thing or two about the subject. 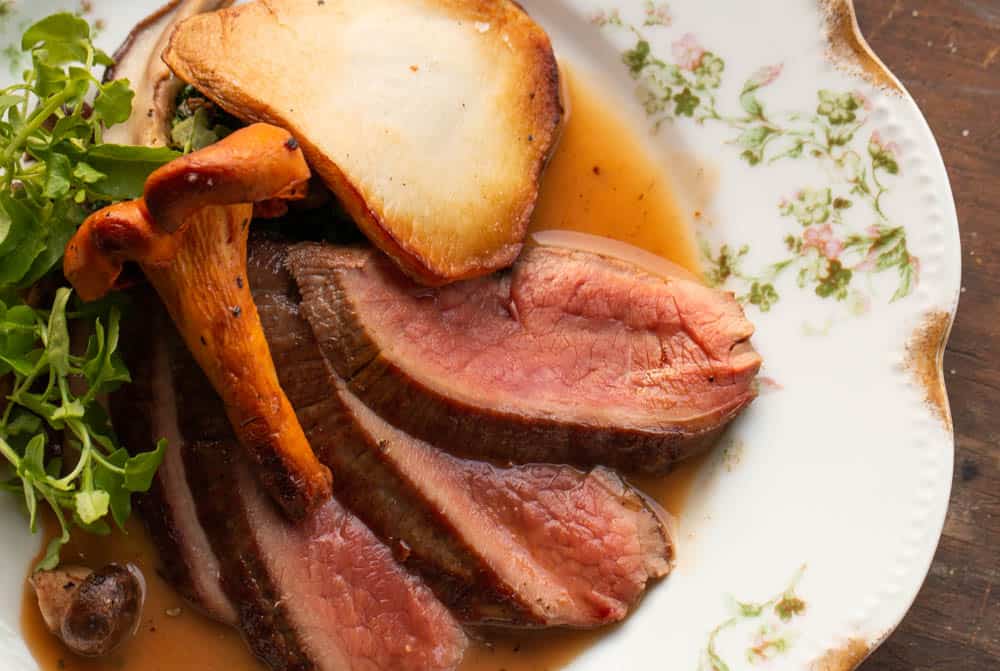 I knew dry aged meat was high quality, and available, but the price was so exorbitant I felt I couldn't justify putting it on the menu. I wanted to keep prices down, but still have a high quality product, so I tried to differentiate by using a farm raising heritage Italian cattle, and cutting hard to find, old-school cuts like bone-in NY strips on a bandsaw in-house.

The meat was great, but if I had the choice now, I would have at least one dry-aged option.

The typical use of a dry age bag is for large cuts of beef, but they're just as good for venison. Picture from UMAi Dry.

Luckily, for you and me, if you have fridge space and like (easy) DIY meat projects, you can dry-age meat and game at home, and it's easy, safe, and a lot cheaper than the alternative. I can tell you after eating my first dry-aged venison legs and lamb saddle that it's the real-deal here. The biggest price you'll have to pay is the opportunity cost of sacrificing fridge space for 30 days.

The secret here was Minneapolis-based (Go MN!) UMAi Dry and their dry-aging meat bags that make it easy to age everything from steaks to whole cuts of venison, roasts, brisket, salami and proscuitto at home, without any fancy equipment or set-ups.

There's other, more "professional" options out there for dry-aging your own meat at home, but, if you're serious about aging and charcuterie like some of my friends are, you probably already know about them, and have a rig already.

Full disclosure here: I reached out to UMAI since I was looking for a way to age meat without lots of equipment—they didn't pay me a cent to write this, and I won't make anything if you want to try some for yourself. I'd never even heard of the bags until a few months ago. 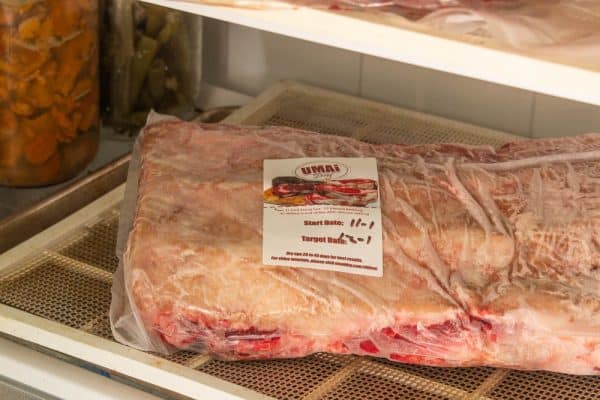 A whole strip loin or ribeye are common cuts to age, to get full sub-primals, you'll need to order from a butcher, or go to a wholesale place, like Costco, Sams Club, etc. 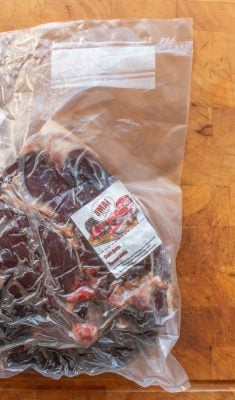 A whitetail buck leg was the first thing I aged. And it was so, so good.

Two important things to contrast. At the Steak House I ran, I learned guests like to ask all kinds of questions about meat at nice restaurants, often just to impress their friends, or to have something to "speak at" the waiter about, even if the menu doesn't say it, or if the price doesn't reflect it.

I had to train staff on lots of different topics to avoid wasting time during service, and "is this fancy beef dry-aged?" was probably the question they had to field most often.

To be honest, instead of saying no, I used an obfuscating tactic a lot places still use, which was to say that the meat was "wet-aged". To be clear, wet-aging and dry aging are completely different things, and saying something is wet aged really doesn't mean anything, but in some situations it can be better than saying no to a guest, especially the overly picky, snobby types.

Wet aging is just leaving meat in a vacuum sealed bag. Dry aging, is leaving meat out where it will dry and lose moisture, forming a crust on the outside that keeps the meat from spoiling, as well as tenderizing the meat from enzymatic reaction/autophagy that happens as the proteins begin to break themselves down.

With wet aging, as the meat doesn't lose moisture and weight, it follows there isn't the same concentration of flavor.

Furthermore, meat left in a vacuum bag for too long will spoil, and, as anyone whose opened up some of those industrial vacuum sealed packs of  chicken breast can tell you, develop foul odors, even if it isn't spoiled. While wet aging will tenderize meat a bit, for all intents and purposes compared to dry aging, it's a meaningless cop-out when you hear it mentioned, in my opinion.

When you crack open the bag after aging, you'll notice a few things. First is the aroma. Aged meat, and things made from aged meat (like garum) have a specific sort of smell.

It's an almost toasted aroma, even though no heat has been applied, that some people describe along the lines of buttered popcorn. Personally, the smells of dry-aged meat remind me of things like the aroma of salami mold and toasty mushrooms.

There's a certain umami quality to it that's hard to put into words, but delicious is a good place to start. The big thing you'll notice is tenderness, the meat is noticeably tender and supple after cooking, far more than I've ever experienced with wet aged meat. Since the meat has lost water weight, it also sears and develops a crust better than fresh meat. 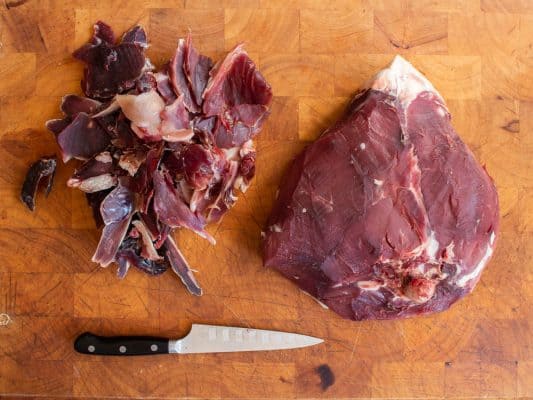 After the meat is aged, the "bark" has to be cut away. 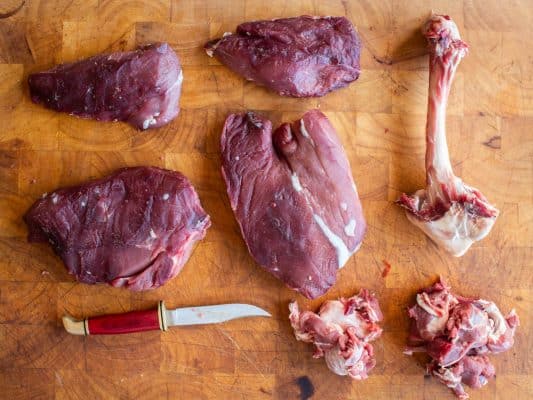 After the meat is aged, the "bark" has to be cut away.

How does it work?

The difference between regular vacuum bags and UMAi Bags is that the UMAi dry-aging meat bags allow liquid to evaporate, where vacuum bags keep liquid in.

To start, you take a big piece of meat, as in a full sub-primal cut like a venison leg, whole ribeye, strip-loin, or another cut like brisket, seal it in the UMAi bag, put it on a breathable surface (cookie sheet with a baking rack or similar) and refrigerate. As time goes by, liquid evaporates from the meat.

If you've used vacuum sealers, you've probably come to appreciate the tight, firm, air-tight seal that happens when everything works out as planned. The dry aging bags are a little counter-intuitive It isn't necessary for the bag to get a 100% air-tight seal.

As long as the bag is, say, 80% sealed, a few air pockets are totally fine, and didn't negatively affect the process at all with any of the venison, lamb orbeef I've aged so far. 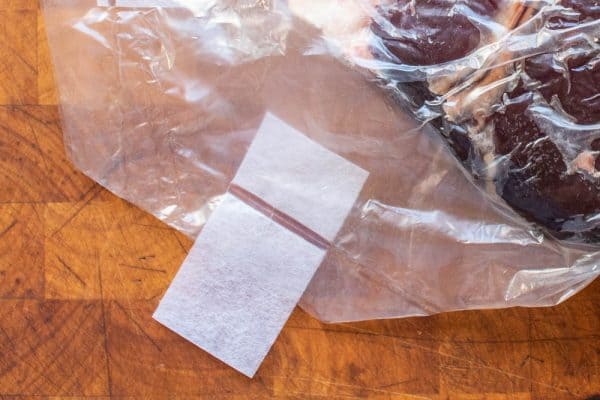 Note the "sealer mouse" the small piece of fabric-like material that helps the bags to seal. Don't throw them away!

Only use big chunks of meat

In a perfect world, you want a whole sub-primal cut. With the deer I aged this year, aging the whole leg (shank removed) was my favorite, and after aging, every roast from the leg was like eating backstrap.

If I wanted to dry-age a different cut like a venison shoulder, I'd make sure it was a large one from a big buck. If you don't live in a CWD area, you could also age backstraps by leaving the back fat on, and keeping them on the bone, trimming off the bone and fat afterword. 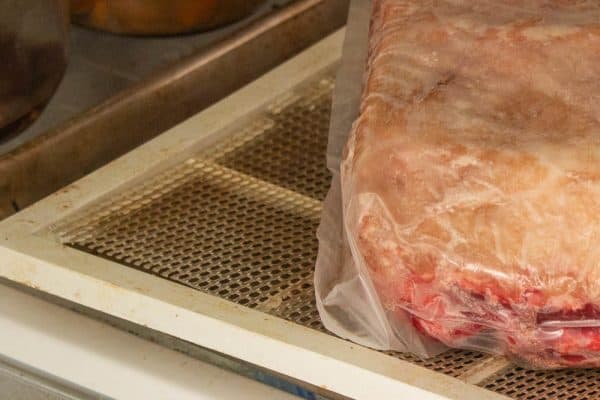 Note that the meat in the bag is situated on a rack on top of the baking sheet to catch any drips.

Making sure to put the meat on a rack to allow airflow, above a baking sheet. Since the membrane allows water out, liquid can slowly migrate out of the bottom of the bag onto the baking sheet.

How long do you age the meat?

Generally 30 days of dry-aging is a standard for flavor and tenderness, but if you're aging the meat of a smaller animal, like a lamb, fawn, or a young doe, you might want to only age it for around 2o days since there will be a lot of loss after trimming. 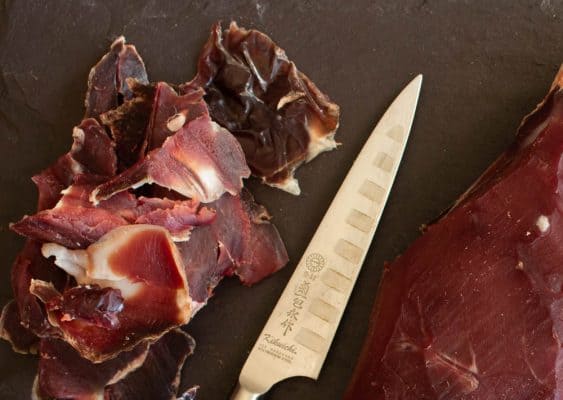 There will be trim, and that trim makes good stock.

Can you do anything with the dry-aged trim/pellicle that gets removed after aging?

Yes. I used to love making stock out of prosciutto trim, so I suspected I'd be able to figure out something to do with the dried outer crust. I made stock with roasted dry-aged venison trim, and with fresh, aged trim, and both were good.

You may see some mold on your meat after dry aging--it's harmless (akin to cheese mold like brie or salami) but you can trim it off before making stock, or just roast the trim until it's golden brown, afterword you'll never notice it was there. 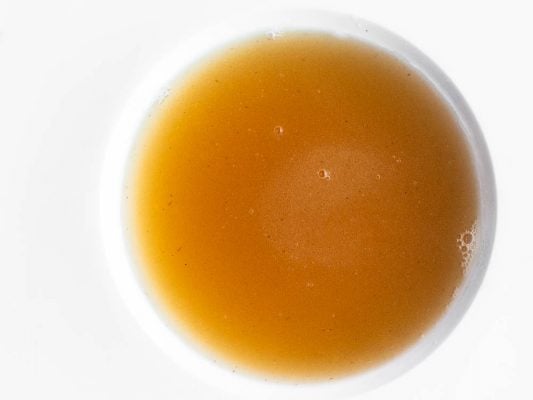 Can you eat the dry aged fat?

I don't eat tons of venison or beef fat, but I do like lamb fat, especially when it's crispy and delicious. I left the fat cap on the saddle of lamb after aging, then I scored it like a duck breast with cross-hatches and rendered it slowly in a cast iron skillet, slicing it thinly after cooking. It was good, and not nearly as rich tasting as I expected from the aging process, for what it's worth.

for venison and larger cuts of meat 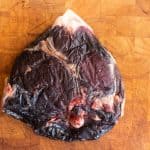 Dry the meat and seal.