Tea from nut trees? Yes. When I shared how I make traditional shagbark hickory nut milk a few years ago, two people left comments about making tea from crushed hickory nuts and it piqued my interest.

I made sure to try a couple batches to see what it was all about. It ended up being a fun hickory nut recipe I think will be useful for people not be willing or able to commit to making true hickory nut milk.

Here's the jist. Traditional hickory nut milk (also known as kanuchi) is made from crushing the dried nuts of shagbark hickory trees (Carya ovata). The smashed hickory nuts, shell and all, are put into a pot with water and cooked for about 30 minutes.

After cooking the pot is stirred, then left to sit for a moment. The shells settle to the bottom as they weigh less than the nut meats, then the (mostly) shell-free nut milk is ladled off the top.

Making tea from hickory nuts is much easier than making the true nut milk as the nuts and shells don't need to be crushed-only cracked. All you have to do is crush some nuts with a hammer, toss them in a pot with a few cups of water, bring them to a simmer and cook for 15 minutes, and voila! Nut tea that has a very good hickory flavor.

The word tea here is a little misleading. Technically, I would probably call this weak nut milk, but it just doesn't have the same ring. The tea will be a little more cloudy than tea from a tea bag, and the nuts and shells will lend a little viscosity to the finished product-it's not unpleasant.

Making tea allows you to use more than shagbark nuts

One of the cool parts of this method is that since you don't need finely ground shells and nuts, you can use hickory nuts that have a thicker shell, such as mockernuts, pignuts or shellbarks.

You can drink the tea straight-up, but I really like it sweetened with a little maple syrup or shagbark syrup, a splash of cream and a tiny pinch of cinnamon.

The "tea" can be a lot more than a drink if you want. Just like hickory nut milk, the tea can be used as the base of a soup or a dessert, especially something with dairy like a custard which helps amplify the hickory flavor. Since nut "tea" isn't as thick as nut milk, you can use it to cook grains like wild rice as pictured below. If you were to use the real hickory nut milk the rice will come out clumpy. 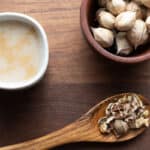