To understand the tradition better, as well as why you'd ever cook rice in nut milk, it's important to know what kanuchi or hickory nut milk is. Before I describe the recipe, I'll discuss the nut milk process in brief, as well as touching on the exact type of wild rice to use and why.

The biggest reason I gather shagbark hickory nuts is to make hickory nut milk. Unlike some other nuts I harvest like black walnuts and butternuts, shagbark hickory nuts have a shell that's thin enough to be mashed up with a heavy tool. Traditionally hickory nuts are gathered and dried, then pounded in something called a botagen until the nuts and shells for a sort of rough paste called kanuchi.

The traditional nut milk is delicious, but after the first round of nut milk, you can pour an additional batch of water over the already once-cooked shells and nut meats and cook it again to make what I call the "second wash". The second nut milk is much lighter that the first, but it still has lots of flavor.

As tempting as it would be to try and cook wild rice in pure nut milk, the second wash is better since it’s not thick. Cooking wild rice in pure nut milk will give a sort of clumpy, sticky rice that’s a bit too heavy. This wild rice won’t taste like hickory nuts, but you’ll notice a sort of weight to it as you eat--it’s more filling, and sustaining than just wild rice by itself. It’s a perfect example of nutritional knowledge passed down, tucked away inside cultural traditions, as well as being a great hickory nut recipe.

If you’re thinking this is impossible to make without a hickory nut tree near you, don’t worry-whipping up a weak nut milk is easy with a blender, just puree two cups of water or stock with 1-1.5 tablespoons of nuts or seeds of your choice, toasting the nuts or seeds (especially sunflower seeds) while not a requirement, can add an extra dimension, and should be done if your nuts have been in the freezer, as mine often are.

For this recipe to work you must use the right wild rice. If you're a regular reader of this site you'll know how much I love natural wild rice, or rice that's been parched after harvesting.

Parched rice cooks up in under half the time of black paddy rice, and has a much lighter weight to it as it doesn't soak up as much water while cooking. Black paddy rice has a darker, robust flavor that can sometimes taste stale to me. Parched wild rice is light, delicate, and so pleasing to eat many of my friends eat bowls of it for breakfast.

If you want to know more about the differences of wild rice, see my longer post and purchasing guide on wild rice linked at the bottom of this post.

This can be a savory side dish, but I probably eat it the most myself as a breakfast dish. If you haven't tried breakfast wild rice you're missing out. Just cook some parched wild rice, warm it up with some of your favorite fruit (apples and blueberries are great) and some toasted nuts, maple syrup or hickory syrup, butter, oil, and whatever else you want. It's a delicious substitute for oatmeal or cereal. Below is one of my favorite combinations. 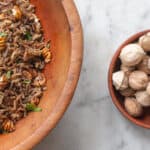 For a savory dish

For a sweet dish

« Chefs vs Wild: Behind the Scenes
Hickory Nut Tea »