Hickory smoked ice cream was inspired by one of the greatest desserts I've ever eaten in my life at Saison My first time eating there at the end of the tasting menu that had to be about 15 courses, the server brought us a little orb of white ice cream. They explained to us that the ice cream was smoked before they poured a thread of warm salted caramel over the top. It was one of the best things I've tasted in a restaurant.

After we finished dessert, I had to interrogate the server about the process of making the ice cream. What he explained to me was that in the morning each day, the cooks would take the milk from the cow on the farm that the restaurant owns, and quench a burning log in it.

Working with smoke, and incorporating the flavor into food that tastes good is a learned skill. I would have never thought to put something alight into dairy as I would assume it would taste charred, but if it worked for them I had to try it myself.

After a good amount of trial and error, I came on some proportions that work pretty well. It's not the same ice cream they served at Saison, but it's not supposed to be. I was inspired by their method and wanted to see if there would be a way I could do something similar using shagbark hickory bark as I know it's often used to make syrup people sell as a sort of maple syrup substitute.

It turned out to be one of the most interesting desserts I've made, and got rave reviews from the groups of people I've served it to over the years now. I usually make a batch in the winter for my friends Winter Solstice party.

Varying and adapting the recipe

There's so many different things you could do with this I could write whole post on the possibilities. The biggest thing to mention is that you can make a version of this using traditional hickory nut milk, also known as Kanuchi, made from shagbark hickory nuts (Carya ovata).

Make one recipe of Hickory Nut Milk and cook it down until 1 cup remains, then add 2 cups of cream, ¾ cups sugar, and 6 egg yolks, and heat gently, whisking, just until the egg thickens the mixture slightly and proceed as directed for the ice cream as per the manufacturers directions for your machine. 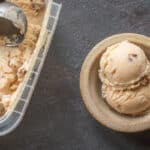 Smoked hickory ice cream uses hickory bark syrup as the sweetener, along with a piece of the bark itself—which is set on fire and quenched in the dairy. You end up getting an ice cream that tastes smoked, and it’s a rollercoaster of flavor in the same orbit as desserts made with salted caramel. A little goes a long way. Yield: 4 cups
Prep Time30 mins
Cook Time10 mins
Infusing time20 mins
Course: Dessert
Cuisine: American
Keyword: Hickory nuts
Servings: 6