Pansotti are one of the most famous dishes in Ligurian cuisine and the Italian Riviera. They're essentially a triangular ravioli filled with wild herbs, served with a walnut sauce sometimes referred to as white pesto.

Accounts vary. One version says the dish was born in the town of San Martino di Noceto, the word noceto translating to walnut grove.

Another theory claims the dish was published by Touring Club Italia. A sort of cooking guide, they published a dish called "pansoti cu a salsa de nuge" or pansoti with walnut sauce in 1931.

Finally, another theory claims General Pansoit invented the dish to serve his troops in the Italian Riviera. Either way, Ristorante Manuelina, a famous Michelin starred restaurant in Genoa, probably deserves some credit for popularizing the dish after it was introduced.

If you want to be traditional the shape is important. The name pansotti comes from the word pansa, or pancia, meaning belly, referring to the filling that stands up.

There's two parts to the filling: the wild herbs and a specific cheese. You can mimic both easily at home.

The prebboggion, or prebuggiùn is a mixture of foraged bitter herbs and greens. Just like the history of the dish, what it "traditionally" contains can be up for debate. Some recipes call for up to 14 wild herbs, another recipe calls for 7 or as few as 4.

Modern recipes typically call for a mix of chard, parsley, chervil, endive or even spinach. Instead of trying to pin down an exact blend it's fine to use whatever you have on hand. Just make sure you have some bitter greens in the mix.

If you want to stick to tradition, the mixture of greens should include 50% borage. Borage has a long history of use as a food in the Mediterranean and Italy where it's known as boragine.

Traditionally the filling is made with prescinseua: a sort of sheep or goat's milk cheese with a sour note. You can substitute chevre, or a mixture of ricotta and sour cream.

There's a video below where I walk through a few different variations you could try. The video was commissioned by a pottery company in the Spring. Per their request it's much longer than my usual videos so feel free to skip ahead. 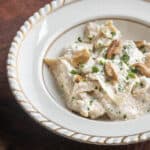 Some recipes will call for small quantities or teaspoons of filling. Make them whatever size you like.

You can freeze the pansotti after making on a cookie sheet lined with parchment. When they're frozen, put them into a container. Cook directly from frozen in boiling water.