A rich, velvety pot du crème that tastes like the soul of a pecan, this is one of my favorite hickory nut recipes. The best part is that there's no shelling individual nuts at all. The secret is kanuchi, or hickory nut milk. If you're not familiar, I wrote about hickory nut milk in an older post here, but I'll describe the process briefly so you understand what's happening.

Traditionally, hickory nuts (Carya ovata only here) were gathered and pounded, shell and all, in a hollowed-out tree trunk called a bootagen. After the nuts and shells are pounded into a sort of rough mash, they're simmered in water. After the nuts and shells are cooked for a while the mixture is allowed to settle for a moment. The nut shells sink to the bottom of the pot, and the nut milk is ladled off the top.

The rustic nut milk you get from the process is incredibly flavorful and has all kinds of possibilities in the kitchen where you can incorporate nut milk or another liquid.

I knew that it would make a fantastic pot du creme, and I was pretty sure it would be easy. It is. There are a couple things to know though.

The amount of cream here is important, more specifically the fat is important. It may be tempting to try and make a pot du crème with only hickory nut milk, but there just isn't enough fat in it to emulsify properly, and to make it thick enough to get it to the point of cream, you will need more hickory nuts than I think is economical for something like this.

Cooking uncovered in a water bath

The water bath is important as it helps the custard cook gently.

Cooking them uncovered is also important as it forms a thin layer called a pellicle that will preserve the custard underneath while taking on an attractive color. If you cook the custards covered, drops of water form condensation will form on the top of the custards, discoloring the top with speckles and spots.

I use 4 oz jelly jars here as they're a perfect, small serving, but as long as you know how to tell when a custard is set, you can make this in just about anything you want. If you use a cooking vessel that has a larger size, such as an 8 oz ramekin, you'll need to increase the cooking time. You can also get away with cooking the custards at 325 F, but you'll need to watch them a little more closely. 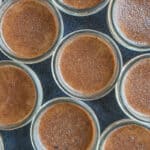 For the hickory nut milk