Stinging nettle salad sounds like something you'd feed to someone as a punishment. The reality is that it's a common, traditional nettle recipe from Turkey called Isirgan Salatasi.

Last year I shared my new favorite way to cook every forager's favorite burning weed by steaming them. I don't think this salad will takes its place, but it's a fascinating traditional dish any way you cut, or in this case, crush it.

A reader from Istanbul sent me an email about the salad and I couldn't believe it. I mean, it's raw nettles in a salad, for crying out loud! To understand how it's possible, let's look at what causes the nettle sting and the different ways to remove it.

Nettle stingers are fascinating. At first glance, it might appear that they're like thistles, but the "stinger" on the nettle plants is actually a trichome-think of them like a brittle syringe.

The trichome has a rounded base filled with formic acid, which is the same compound that's in fire ant and bee stings. That formic acid is what causes the burning reaction, which can be more or less pronounced according to the age of the plants and individual sensitivity.

To prepare the plant for cooking, there's three ways to remove the sting. Here's a quick list:

Cooking the plants, as in blanching, steaming, or just tossing in a pan, is the most common method.

Drying or dehydrating also denatures the stingers. This is how nettle leaves are prepared for making tea, although you can make a good tea from the fresh leaves too.

Bruising the plants also breaks the stingers and makes them harmless. This is an old forager parlor trick friends of mine use to impress people when they lead forays. Roll a young nettle around in your hands, then pop it into your mouth to the shock of those around you.

Crushing is the method used for the raw salad, and it works, but you do need to be thorough. After watching every video I could find on the dish online last winter, I noticed there's a few different ways that the nettles might be prepared.

Some methods seemed more thorough than others, and one or two videos simply chopped up nettles that appeared to be nearly raw. I wasn't about to take any chances, so I went with what I assumed was the most sure-fire way to make sure I don't get a mouthful of formic acid: the rolling pin and massage method.

Here's what you do. Get some young nettles or nettle tops, wash, drain and dry them. Put the nettles on a big cutting board, and then roll them over with the rolling pin, again, and again, fluffing them up here and there to make sure that every leaf has been smushed.

After the leaves have been flattened a bit, you ball them up and cut into a chiffonade/shaved. At this point, some simply season the salad and serve, but as I tasted my first version, I still felt a little tingly sensation, so I went a little further and massaged them as you would a massaged kale salad.

Getting all the nettle goodness

Then came the moment of truth. I ate it, slowly at first. There was no sting. If you love nettles like I do, then you'll know they're an extremely healthy, nutrient-dense food. I've started to move away from blanching as I know that some of the water-soluble nutrients are lost to the blanching water.

Although steaming is great, and you'll taste a deeper flavor in the greens, the salad goes even farther, letting you consume the nettles raw in their purest form. That being said, steaming is still going to be my go-to, but I think that every nettle-head should try this at least once.

Like most traditional foods, there's different dance partners you might see being used. It's a chunky salad, typically mixed with chopped tomatoes and other things. I chose a combination of tomatoes, feta cheese, wild mint and English cucumbers, but there's plenty of other things you can add too, here's a quick list of the most common I've seen.

There you have it. Raw nettles. In a salad. I think it might be possible to do the same with wood nettles (Laportea canadensis) but their stingers are more vicious so I'll probably keep steaming those.

If eating nettles raw still makes you uneasy or if you don't care for them as I describe here, use chopped, quickly steamed nettles to get a similar effect. Some of the videos even cook them first.

If you try the nettle salad let me know what you think. I made a quick video so you can see me actually eating it-I guarantee it's real! There's also some links to other videos at the bottom of the post if you need extra evidence. 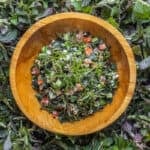