Stinging nettles are one of the finest wild greens you can use to make soup, and there's plenty of recipes out there. Some are good, some are ok. Most of the ones I've tried have tasted mostly of potatoes.

This recipe I developed for a dinner I billed at $1000 per person for a group of CEOs. To my surprise, everyone agreed it was the highlight of the meal.

This one is the strongest tasting nettle soup recipes I know of. It's my version of the most common recipe relying on nettles, vegetables, a little potato, and a splash of cream.

As I worked on the soup over the years I tried different ways of thickening it. Potatoes are the most common, but sometimes I like to use rice.

Roux was out of the picture as the soup needed to be gluten free. After tasting the potato and rice-thickened versions side-by-side, I was stumped. Neither soup had the vibrant, verdant taste of nettle I wanted.

One day while teaching a line cook on how to blanch vegetables I realized why the soup wasn't as strong tasting as it could be.

Steaming the nettles quickly, then allowing them to cool, spread out on a tray will keep the flavor strong. This is because nothing is lost to the water. That said, you can get a great result from either blanched or steamed nettles here. The potato tip below is the most important for the correct flavor.

Traditionally, the nettles and vegetables are cooked together with the potato or rice and pureed. This, combined with the blanching, ends up making a soup that tastes more of potato or rice than it does nettle to me.

I suspected that cooking potatoes separately in water and discarding that after cooking would bring the flavor of the nettle to the front. It also removes some of the potato starch that can get overpowering and gummy tasting in pureed soups.

Both my hunches were right, and the finished version using those two nuggets of clarity was the version I served for the dinner. It is still the recipe I reach for when I want someone to taste the true flavor of nettles.

Nettle Soups From Around the World

There's variations of this from around the world. Here's a few of my favorites: 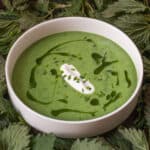 If the nettles are young I may not wear gloves, but I always do with older plants as the stinger intensifies as nettles grow. You can also harvest nettle tops in early summer, or buy them at a farmers market.