I've been in love with researching traditional uses of nettles around the world, and soup is one of the standbys that seem to be omnipresent wherever nettles are eaten.

This delicious Spanish nettle soup scented with Jamon Serrano and thickened with cornmeal is a bit different than others I've come across, and can make for a nice variation if you're used to having your nettle soup pureed.

I don't know exactly where I got the inspiration for it, since sometimes my notes can be a bit of a jumble, but it was probably one of my scientific books on ethnobotanical uses of plants in the Mediterranean and surrounding areas.

Either way, my notes were very clear: it is a soup made with freshly chopped or sliced nettles, water, onion, and, the kicker that made me really want to try it: Jamon Serrano.

Jamon Serrano is the Spanish equivalent of prosciutto, basically, salted, dry-cured ham. Similar versions of it are made in different places around the world, but Jamon Serrano, and especially the Iberico de Bellota made from the Pata Negra.

These are the black footed pigs that feast on acorns in the forest, is especially prized, and expensive (some of the legs are wrapped in gold leaf before shipping). One of my favorite purveyors, Great Ciao, carries the creme de la creme Iberico ham from a company called Fermin, here's a brief snippet:

"At Great Ciao we carry a few ibérico products from FERMIN.  The Serrano, which is 75% ibérico, and the ibérico de bellota, which is 100% ibérico.  The ibérico bellota is also the famous acorn finished ibérico pig.  This means that the pigs begin the montanera (finishing period), between September and February, with an entry weight of between 180 and 200 pounds, and replace at least 50% of their entry weight on a diet of acorns and grasses.  This diet changes the oleic acid content of their fat.  The higher the content of oleic acid the better the product is for long curing.  The fat somehow combines both a rich nuttiness with clean, almost olive oil like, mouth feel.

The fat structure, the quantity of fat and distribution of the fat allows for less salt in the cure, a longer cure, and adds complexity to the final product.  The hams are cured for an average of 36 months and are air-cured, taking advantage of the mountain climate surrounding the plant, located in the Las Batuecas Natural Park."

Unfortunately, I didn't have any Iberico ham, but I did have my homemade smoked lamb country ham, which is probably more along the lines of Fenalår, a Scandinavian smoked mutton ham. It ended up being a good problem to have.

The gentle saltiness the ham adds is a wonderful backdrop for the nettles and cornmeal. I also make broth from the bones of my cured meats, a trick I picked up from working with La Quercia prosciutti-I used to buy prosciutto bones from them just to make broth. Prosciutto bone broth is a nectar of the gods, and even if you don't have any nettles, it's worth trying if you can beg a bone from someone. 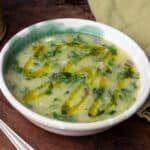 Nettle Soup with Ham from Extramadura