Today, I have for you one of the best stinging nettle recipes I've tasted to date. Turkish nettles? Oh yes.

I'm unsure of the exact species of nettle that might be cooked in the Middle East, as there's a number of nettle genera eaten around the world, like the giant Nepali nettle (Girardinia diversifolia which, is also an important crop used to make textiles to this day).

My educated guess is that Urtica pilulifera (Roman nettle) is used here as I've seen it in ethnobotanical accounts of the region, and Isirgan is also a regional name for the plant.

Whatever you call it, it's a novel, delicious way to have nettles. Interestingly enough, there's a number of Turkish websites that appear to suggest serving nettle salads with cheese and a few garnishes where the nettles are literally raw.

Maybe there's something lost in translation there (chime in if you can clarify) but I don't suggest experimenting with eating a salad of raw nettles, however young, unless you want to teach someone a lesson.

Blanching nettles is is tried and true, but anyone who's done it will know that the leftover blanching water is a deep green—a clue that blanching removes more from the nettles than their sting.

Steamed nettles, like you might expect, taste more of themselves. With Urtica dioica/common nettles, this is a chlorophyll green flavor so strong and concentrated it tastes nearly aquatic.

If you've ever pureed nettles into a soup, you may know the flavor. I crave the strong, assertive flavor of nettles, but if you have children (or a partner with a childish palette) you could blanch them here to calm the flavor and the dish wouldn't suffer for it.

The way that the steamed nettles mingle with the mild cheese and olive oil scented with garlic is just magic, and a dash of crushed red pepper flakes is welcome too. Give it a try with your next basket. 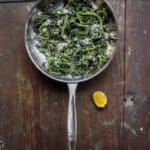 The size  Fresh young nettles about 4 inches long are perfect here. If you're nettles are older consider roughly chopping them after steaming to make for easier eating.  The sting  The sting of Utrica dioica is not bad when they’re young but will increase with age, and some species (wood nettle / Laportea canadensis) have a much more intense sting that others.