A few years ago I had the pleasure of having dinner at my friend, Author and food writer Stephen Hoffman's house. We started the dinner with the visual and interactive French classic eclade de moules (mussels cooked in pine needles) moved onto a nice salad with anchovy dressing, and a dish of slow-cooked halibut with cherry tomatoes made by Eric Eastman. What I remember most about the evening though, was the bowl of wood nettle soup.

Wood nettles (Laportea canadensis) don't get nearly as much play as their cousin, the common stinging nettle (Urtica dioica) and it's a shame, because they're crazy delicious, with a very different flavor than typical nettles.

Besides having a different flavor (it's more floral, where common nettles I describe as saline, or oceanic) wood nettles are also special in that they're indigenous to North America, making them not nearly as widely available as common nettles. I like to think of them as one of the special treats I get for dealing with Midwestern winters.

The wood nettle soup Steve made was really good, and really simple. Some mirepoix, a potato, fresh wood nettles, and chicken stock. It was kind of half-pureed, with some of the tiny pieces of mirepoix still visible. I liked the rustic style, and had to make sure to put up a version of it here.

The magic of the butter in soup

You can make the simple nettle soup recipe by itself, but the garnishes here (wild ramp butter and pickled chanterelles) really take it from a good soup to a fantastic one. The onion butter is particularly interesting. While I was reading a book on Turkish cooking, I noticed that for a couple of their nettle soups, butter is added at the end of cooking as a flavoring.

The butter technique is a little counter-intuitive compared to Western culinary standards, but it's a fantastic way to quickly dress up a soup. Traditionally only regular butter is used, but I usually have ramp and wild onion or ramp leaf butter on hand so it was a no-brainer to add some. You can use the butter trick for many soups made with wild greens. Try it and be changed. 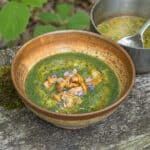