I love a good frittata, but there's something to be said about the good, the ok, and the bad. Overcooked, egg pies (as I would call for them on the line) are dry and crumbly. Undercooked they weep undercooked egg and are unappetizing. With too many ingredients, they'll fall apart, and with too few ingredients, they're uninteresting.

With frittatas incorporating leafy greens, most often, at least from my experience, they fall into the category of too few ingredients: mostly egg, maybe a little cheese (probably too much cheese), and a skimpy handful of spinach or kale. This nettle frittata is not that frittata, and one look at the black green beauty that is this egg pie should tell you that.

I love the Time Life series of books called "The Good Cook". It's a series that flies under the radar, but every single book was written by Richard Olney-a master of his craft alongside Jacques Pepin, James Beard, and Julia Child. In his book on eggs and cheese for the series, he demonstrates a spinach frittata colored such a deep green you might wonder if it even contains egg.

The first time I saw it, I made a note to revisit it after I finished the book, because that is exactly the sort of leafy green egg pie I want to eat. I want a nettle frit that is more nettle than egg, and once you taste this one, I'm pretty sure you will too.

It's so simple: take some nettles, steam them to keep their deep earthy flavor (or rich, woodsy perfume in the case of wood nettles) chop them up, add a splash of dairy and egg, season it like you care, and cook it-that's all this is.

I had to do a little tribute to Richard Olney's meticulous image tutorials that are a calling card of all the books in the series, so here's six pictures illustrating the steps of making a nettle frittata.

You need far less egg to set something than I think most people think for a frittata, but the shape of the ingredients is also important, since, if there's too many chunks, the finished product might be difficult and resist cutting clean after setting.

Finely chopped greens would love nothing more than to soak up some egg though, and it works like a charm. It would be happy alongside a few strips of bacon, but I find myself cutting slices off it throughout the day for a snack, maybe with a dollop of lemony aioli or a little spicy mayo. 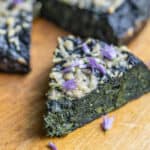