Bakula, a Moroccan mallow salad also known as Khoubiza or Bakoula, along with Bqula, among other names, is one of the most famous dishes of foraged greens I’ve found, and comes from Morocco.

I first read about it while I was going through a research project / academic compilation called “Local Mediterranean Food Plants and Nutruceuticals“-a project funded by the European Union that tried to catalog and describe many of the individual species of wild plants consumed in the Mediterranean, as well as taking a look at some of the possible health benefits of traditional diets in the region.

Before you go looking for a copy, know that the book is definitely not a cookbook, it is a dry, very academic science paper anthology, filled with all kinds of terminology most people won’t be able to understand. Personally, I can only understand about half of it, but the half I do understand is really interesting.

In one of the lists they had in one article, there was a mention of a dish called Bqula, and that was pretty much it. The name seemed an unusual one to me though, and it stuck in my mind. Later, while reading Stephen Bartstow’s book “around the world in 80 plants” I noticed he made a mention of it too.

As it happened, I was still working as the chef of Lucia’s Restaurant at the time, and I also happened to have a server from Morocco who confirmed it’s popularity: “Oh Bakoula? Jah, we eat it all zee time” I remember him saying. Around that time is when I decided there must be some information online about the dish, so I started taking a look.

Indeed, there’s plenty of information online, but finding it is a lot easier if you use the most commonly used name for it, which seems to be bakoula.

Traditionally made with Jute Mallow

Armed with a more commonly used name, I came upon a few variations of the dish, and made a note of the most common ingredients: jute mallow (Corchorus olitorius) and or purslane, spices, olives, preserved lemons-especially fitting as the dish is from Morocco, which is where preserved/salted lemons are very traditional ingredients. Sometimes cilantro and garlic are also used.

The dish itself is really simple, some mallow leaves or other soft foraged greens cooked with garlic, olive oil, spices and olives and finished with preserved lemons either mixed in or as a garnish.

I’ve since made the dish with lots of different wild plants (and I’d suggest you do too) but for the most traditional flavor and texture, it should definitely include some mallow, which gets a silky texture after cooking.

Pictured in my version of the dish (that also appears in my book) are fermented lemons as opposed to preserved lemons. If you’re interested in trying your hand at those, refer to my post on fermented lemons. 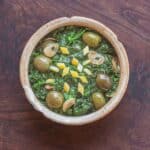