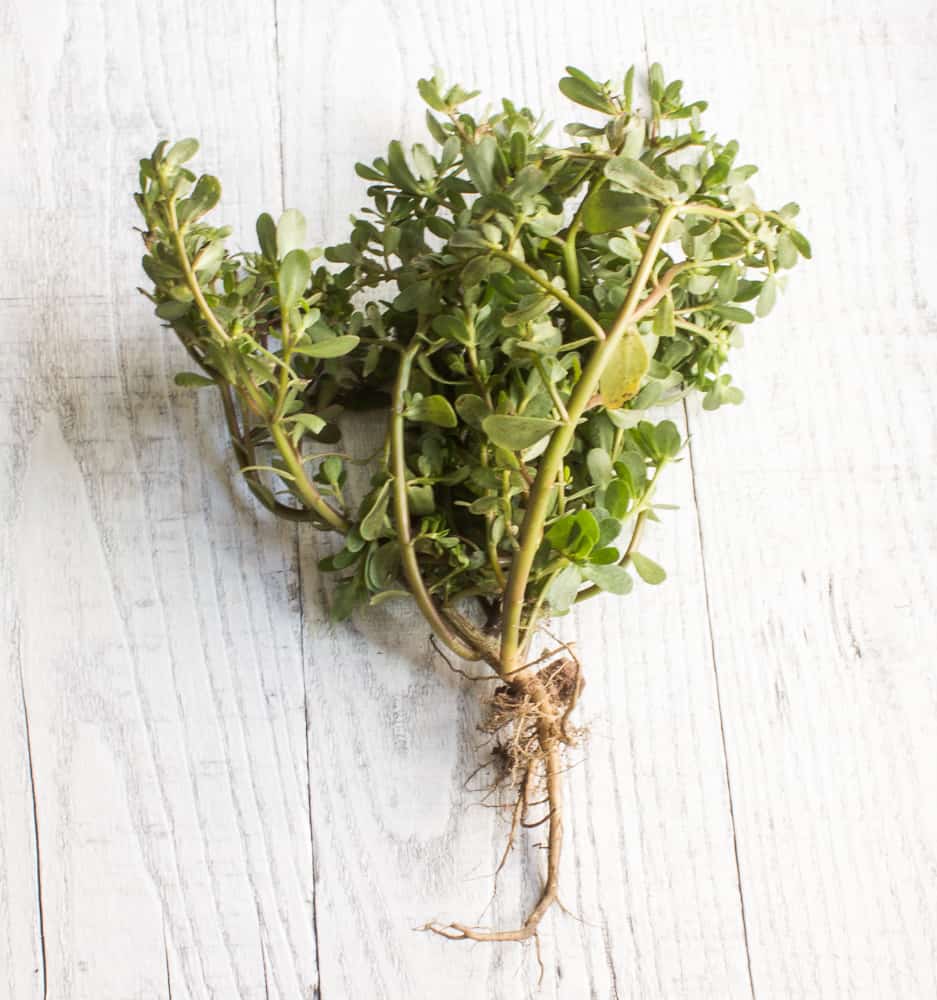 Purslane, or Portulaca oleracea is one of the most ubiquitous, underused wild greens out there. It’s a juxtaposition in and of itself, as you can find it growing out of a crack in the road, but also at Asian grocery stores, farmers markets and on the tables of some very nice restaurant. It’s truly a poster child for the dysfunctional way that society perceives wild plants.

I’d read about purslane in a few books on herbs and greens, and I was exited to try them out when my sous chef brought some in from the farmer’s market. I tried some right away and was intrigued by the chewy texture of the stem, and the slightly tart taste. Not quite as tart as sorrel, but still with a little bit of zip. It’s a funky sort of flavor. 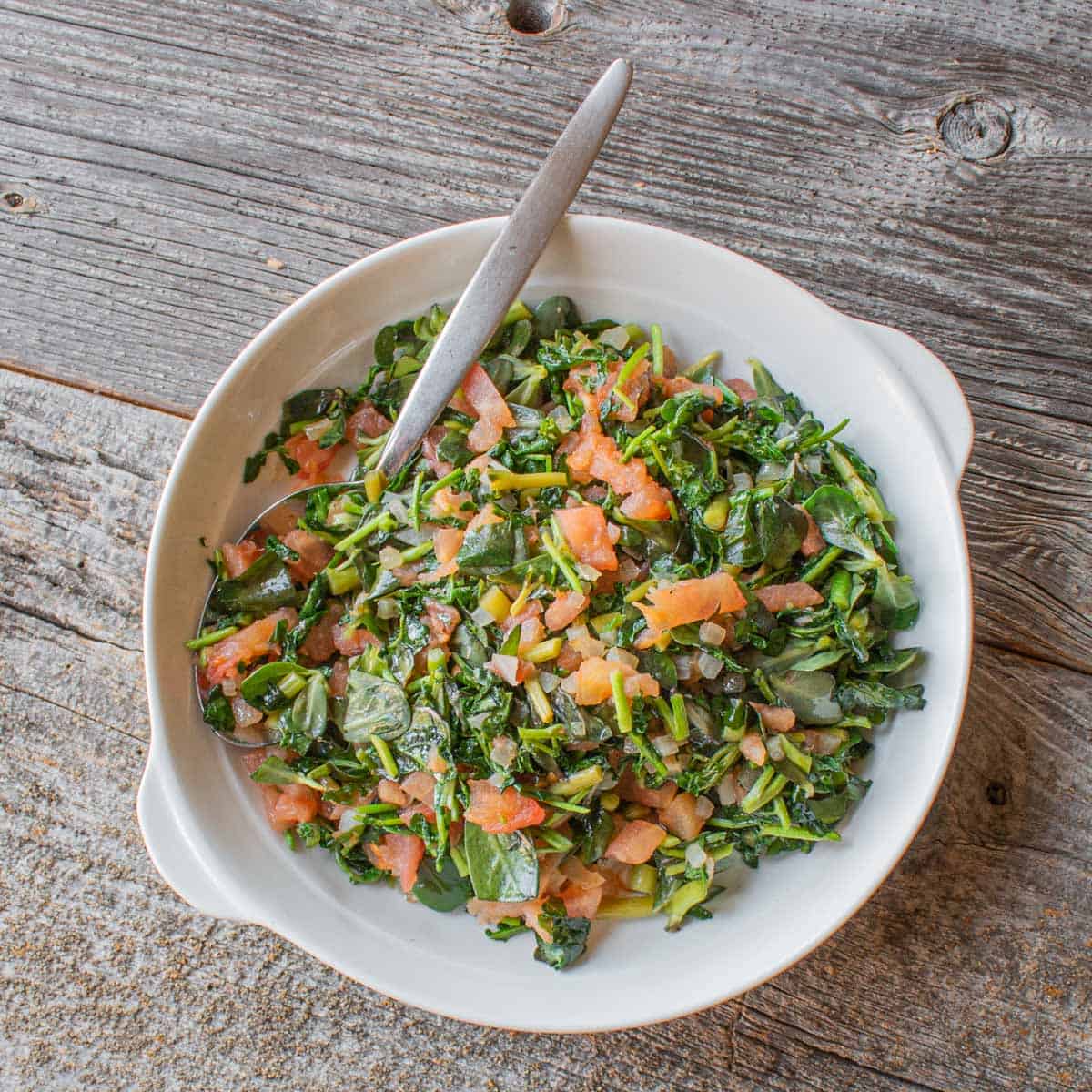 The hardest thing with purslane is knowing where to get some. It grows out of the sidewalk just about everywhere you look, but personally I don’t really want to eat those. What you want, is a garden, or a friends garden. Purslane loves disturbance, like so many delicious wild greens, and the more you pull it out of the ground, the more it seems to want to come back. The good part, is that when you go through and weed out the purslane, instead of tossing it in the compost, or leaving it to smother the garden crops, you can take it home and cook it.

Other cultures have known about eating purslane for a long time, especially in Latin America where it’s known as verdolagas, as well as in Spain and Portugal. In those places, cooking purslane is common, but especially in Mexico where it’s often made with lard, tomato, onion, and jalapeno. See a version of that here. Anytime I was in a kitchen and want to start up a conversation with a new employee from South America, all I had to do was ask them if they liked verdolagas and, just like that, they’d instantly take a shine to me. The deep appreciation for specific culinary plants, the sort of love for respect for eating them that transcends class and location is a cultural thing, and something I think Americans could learn a lot from. 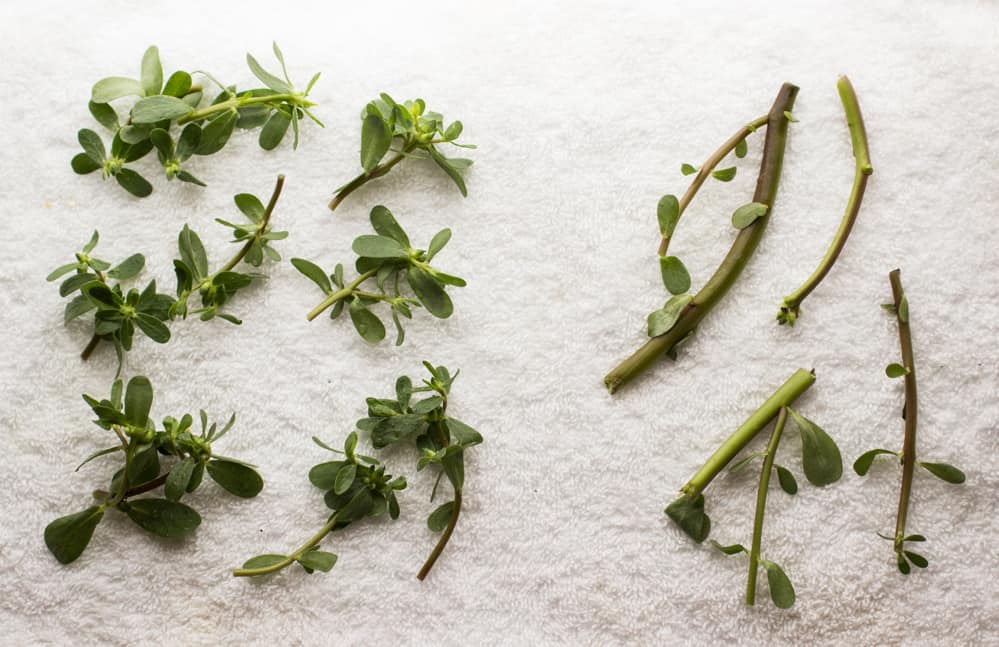 I like to separate the clusters of greens from the larger stem sometimes, but all of it is edible. If I wilt and cook it, I may leave more of the larger stem portion attached.

Speaking of cooking, generally when I use purslane, I eat it raw. All I do is wash little clusters of it and throw it into a salad or on top of a piece of fish–that’s it. A lot of recipes are out there for cooked purslane though, so it can definitely be done, but know that the texture changes and it can get a little slippery and the flavor gets stronger, if you can believe that. My advice is to try it raw and make sure you like it first, then

I’ve had a lot of fun building little salads of Purslane and other ingredients. With it’s chunky shape, it can be picked into pieces of say, two leaf clusters at a time, then tossed with some ingredients of roughly the same size, like quartered cherry tomatoes, small pieces of artichokes, diced potato, chopped green beans or peas, chickpeas or small lentils, or whatever else you want and make a nice composed salad. 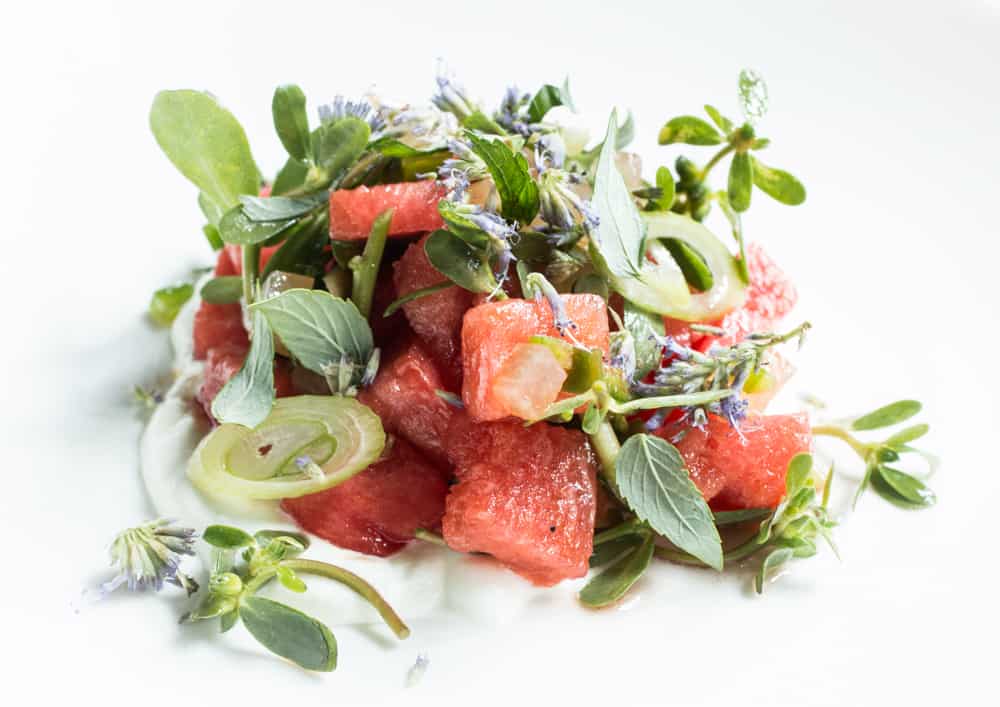 It’s great with watermelon, or another chunky salad in the summer.