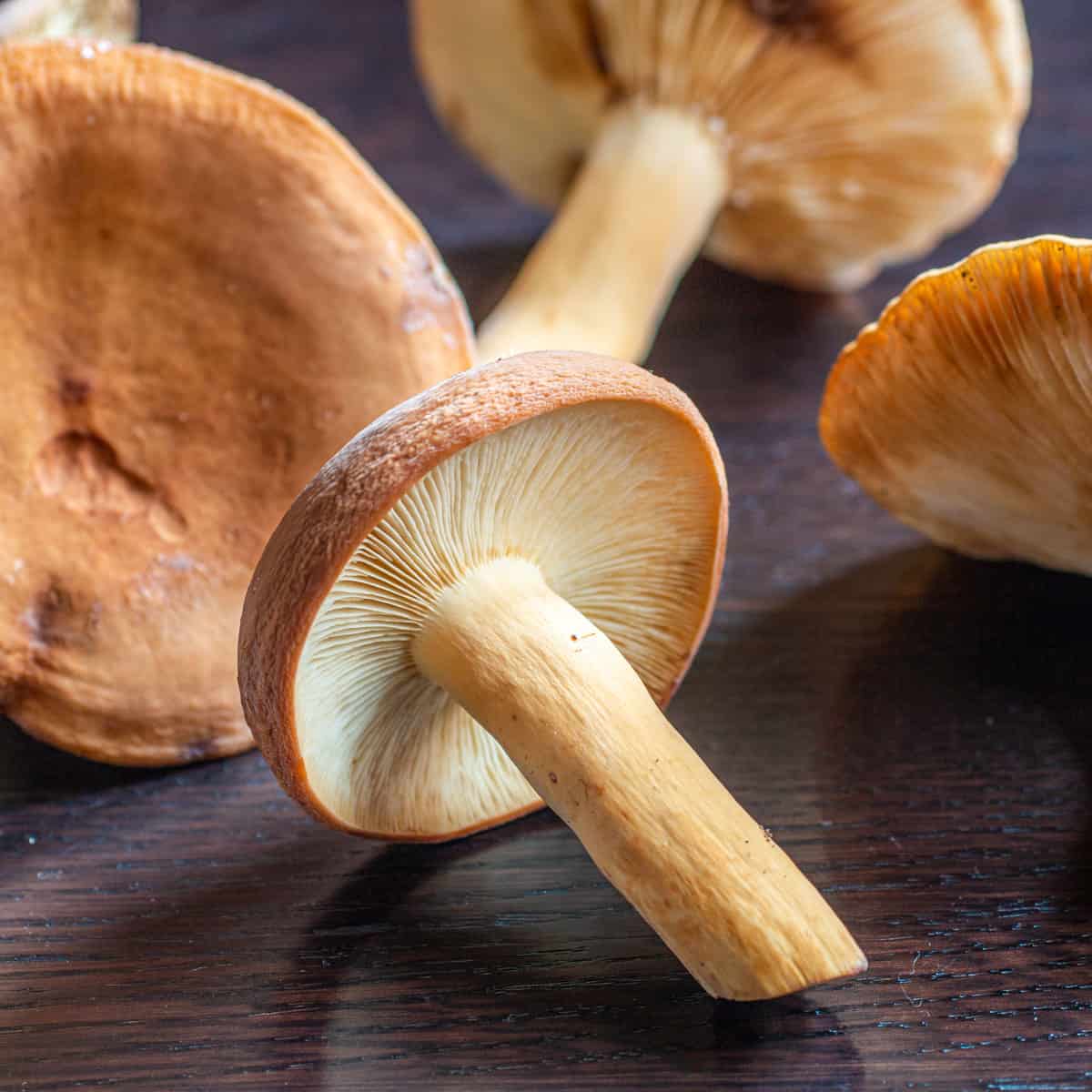 Lactifluus volemus. Note the widely spaced gills. They bruise and stain quickly though, like most lactifluus.

I'm lucky and grateful to have a network of friends that hunt different plants and mushrooms. We share information on places we've hunted, seasonal changes, what's coming up when, and it helps to have company sometimes since mushroom hunting is for the most part a solitary sport.

Last year my friend Michael, a local artist and mushroom hunter who's working on collecting specimens for a new mushroom hunting and cooking guide for the Midwest he's working on, brought me by a bag of Lactifluus volemus, (formerly Lactarius volemus) with the caveat that I keep my eyes peeled for a few mushrooms he needs photography specimens of to include in his book.  Scouring the land for individual species of shrooms is a lot easier said than done, mushrooms from the genus Lactarius can be some of the trickier ones to find when you need them. 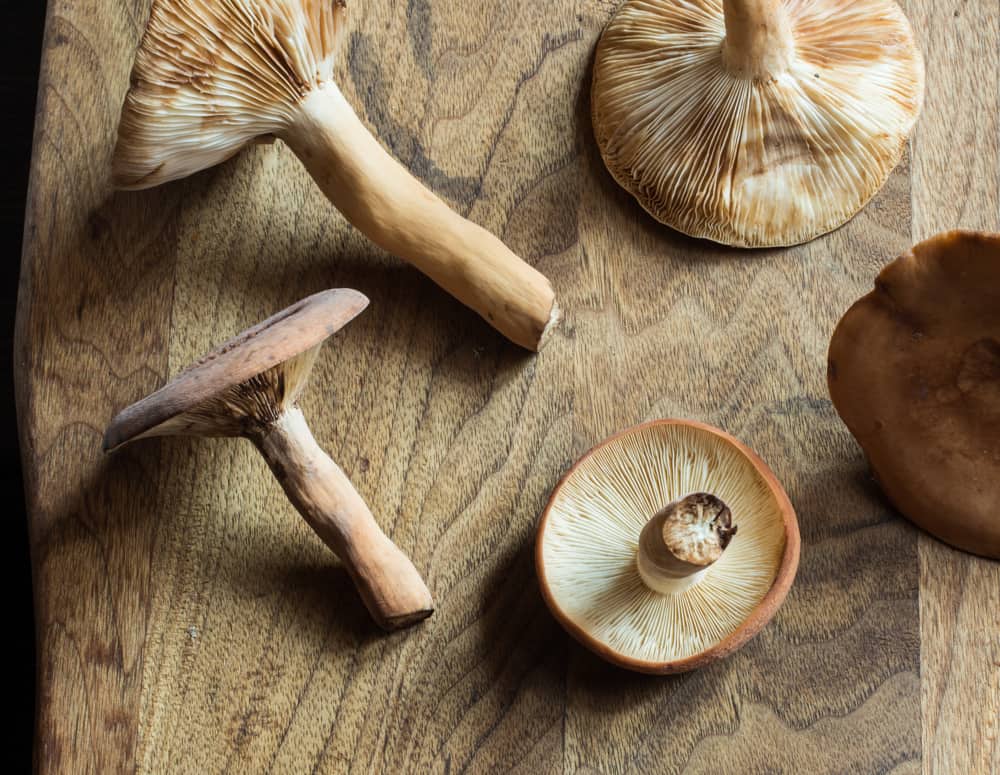 Note the gentle brown staining and how the caps are nice and curved down when young. The cut stem you can see is not hollow when young, either.

He dropped off a bag a couple bags of them, and mentioned something about their aroma, which my line cooks were quick to describe with colorful adjectives revolving around intercourse and bodily fluids. Lets just say that you can use the fishy smell as a way to help identify them.

In the summer, after picking on a hot day and put into a warm car, you may need to roll the windows down, but when they hit the pan the smell transforms into a rich, nutty flavor. They're one of the best of the Lactifluus family I've tasted, and I'll say I might prefer them to any of the L. delicious (saffron milkcap) group that I've had so far, well, with the exception of Lactarius thyinos. 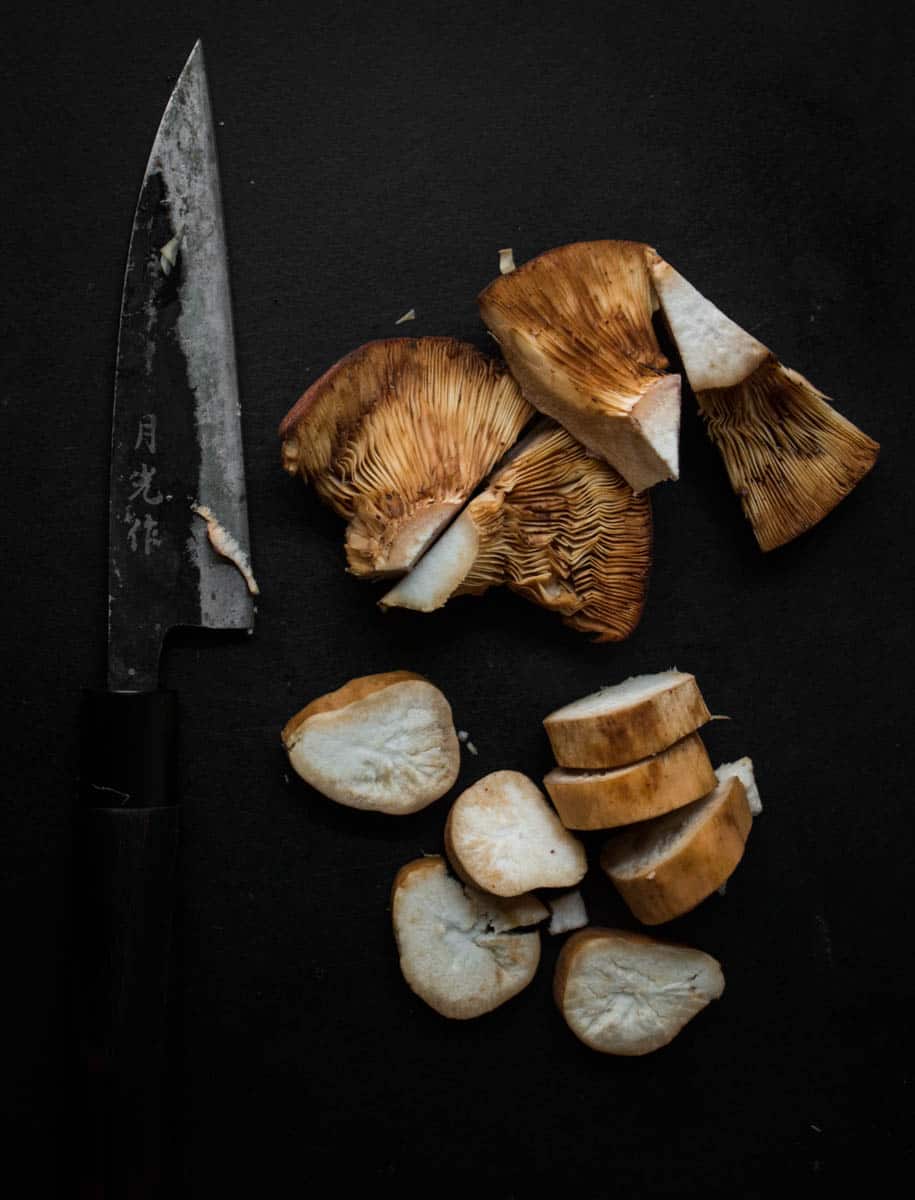 A nice mushroom with a thick cap and stem.

Since my friend introduced me to them, I've been able to pick them growing spots at a number of different places, most of the time they seem to like the same habitat as lobster mushrooms, which will be mixed deciduous hardwoods around the Twin Cities and Midwestern Minnesota.

In Northern Minnesota you'll likely see them with various conifers, but I have yet to find them up there. I often see them in chanterelle patches, too. They're widely distributed across North America in hardwood forests during the summer. 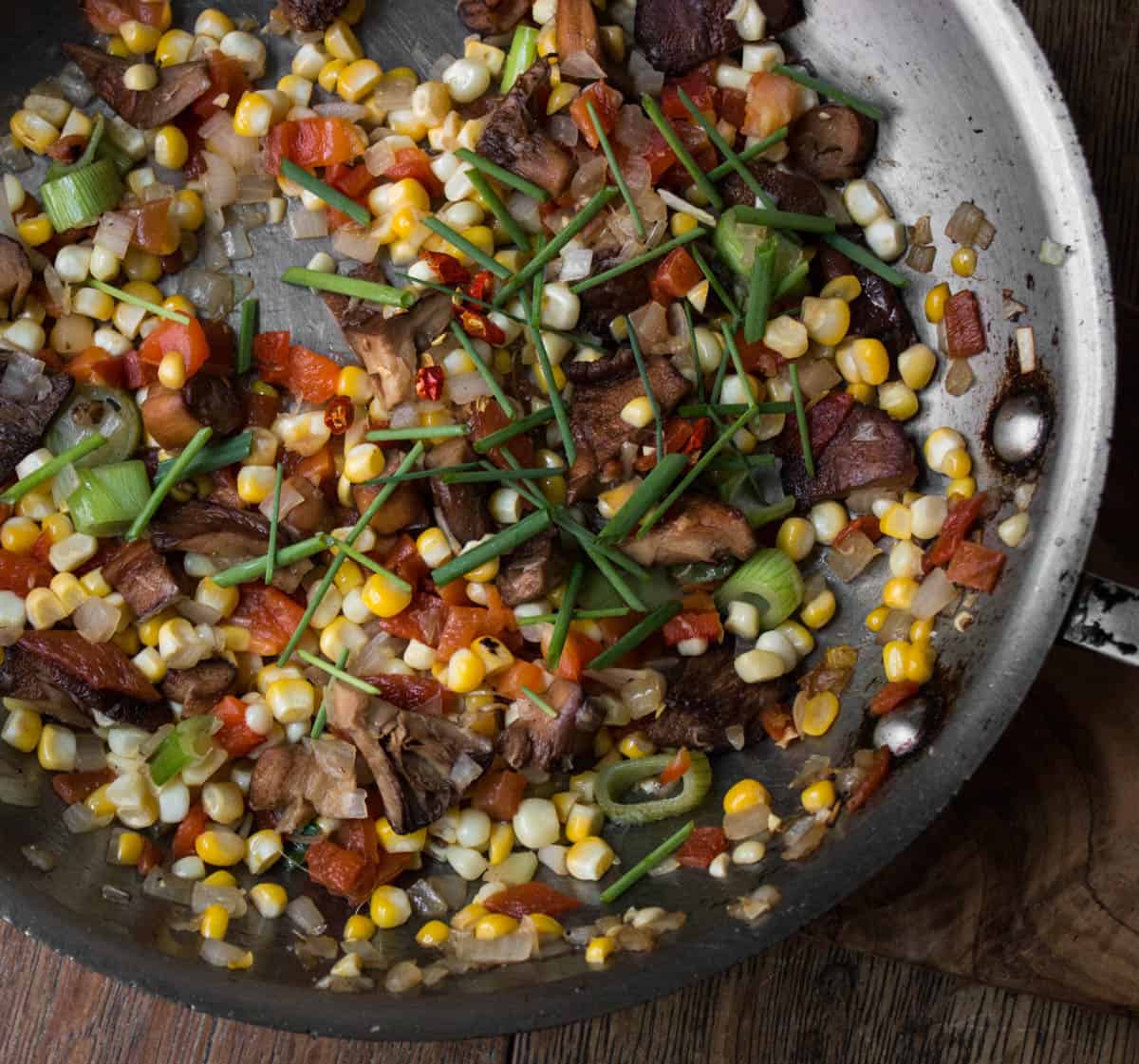 Vegetables like corn and peppers are great with these.

I don't usually do ID run-downs, but these have so many particular, easy to notice differences than a lot of other mushrooms I thought It could be helpful.

The first thing to know is that you may actually smell these before you taste them. Volemus have a very strong aroma, and I'll often catch it on the wind when they're near. It's a cheesy, fishy scent, and you'll know it when you smell it.

These give off a profuse white latex when cut, a characteristic of milk cap mushrooms. Volemus has a kind of unsettling quality in that when you cut it, it doesn't drip-drop latex, it oozes latex, all over the place. This is why they're also known as the weeping milkcap. 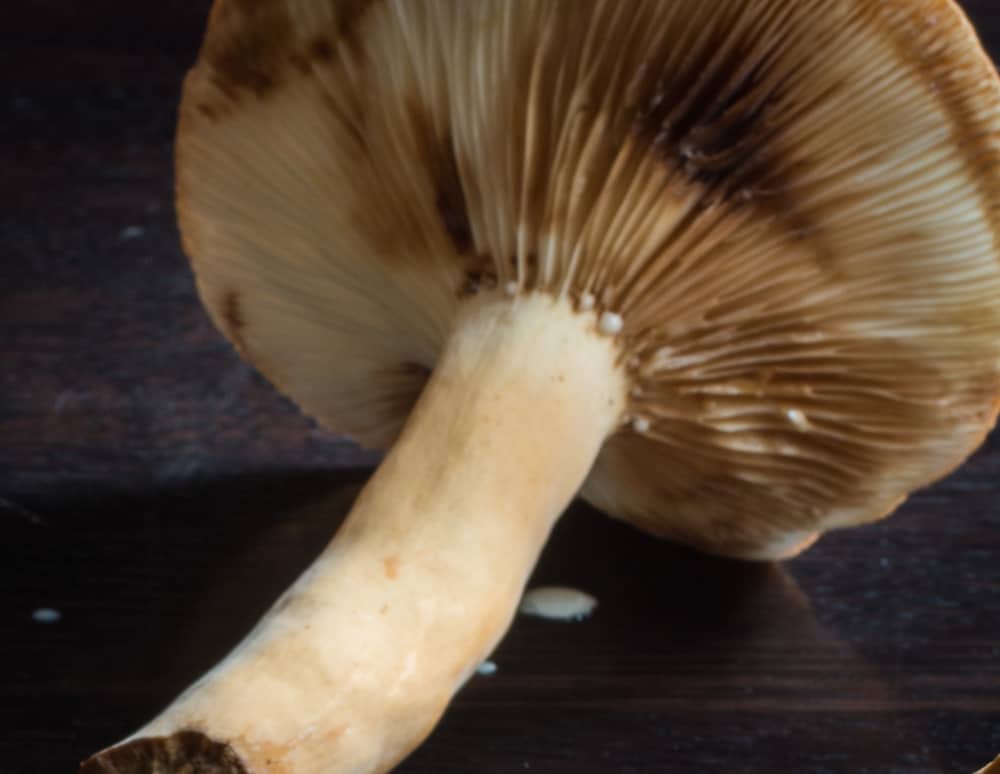 A little blurry here but note the brown staining and thin milk (latex), they give off a lot of it!

As weird as the latex might look, romaine lettuce technically gives it off too, so don't let it weird you out too much. Know too, that you can also use latex to help you identify qualities of the mushroom in the field, as some will taste hot, bitter, etc. Volemus latex is white, thin, copious, tastes mild, and dries brown on the mushrooms. 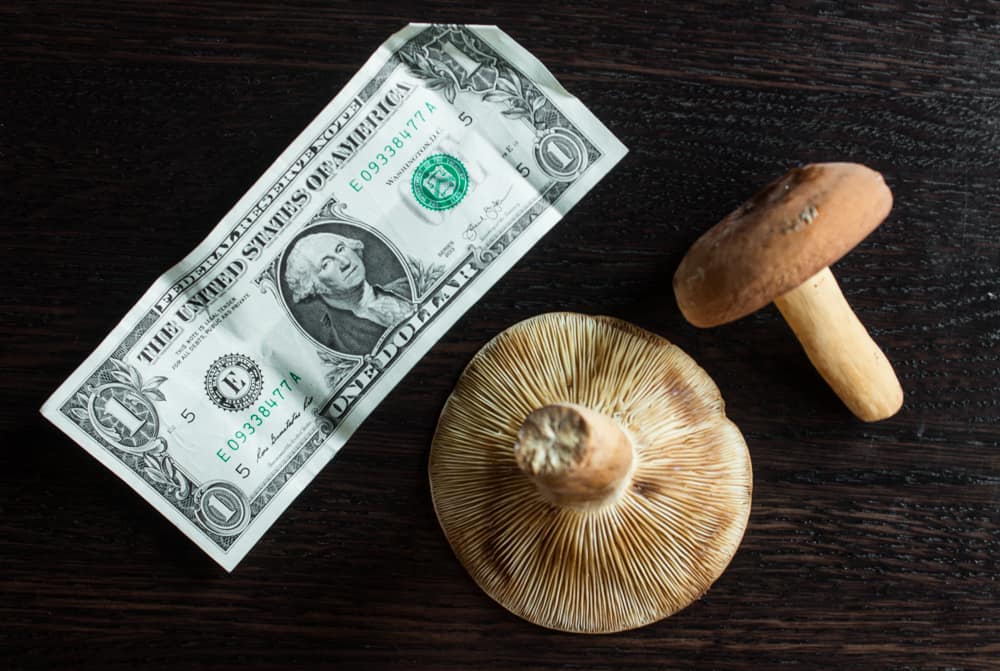 There's a few mushrooms that resemble L. volemus. You'll want to compare your mushrooms with Lactifluus corrugis and Lactifluus hygrophoroides to ensure 100% ID. All of the aforementioned mushrooms are edible.

David Arora says they're one of the best eating mushrooms in North America. While I had them in the restaurant I cooked them alongside a selection of summer mushrooms for a few fungi loving guests, the volemus as well as fragrant black trumpets (Craterellus foetidus and cinereus) beat all other mushrooms I served them with: boletes, chanterelles, lobster mushrooms, club fungus, chicken of the woods. Like I mentioned their smell completely goes away cooking, it gets nutty, pleasant and mild.

Here's a recipe that highlights their slightly fishy/cheesy quality, and a few others made for milkcaps, or where they could easily be substituted. Lactifluus Volemus with Smoked Paprika, Garlic, Parsley and Shrimp