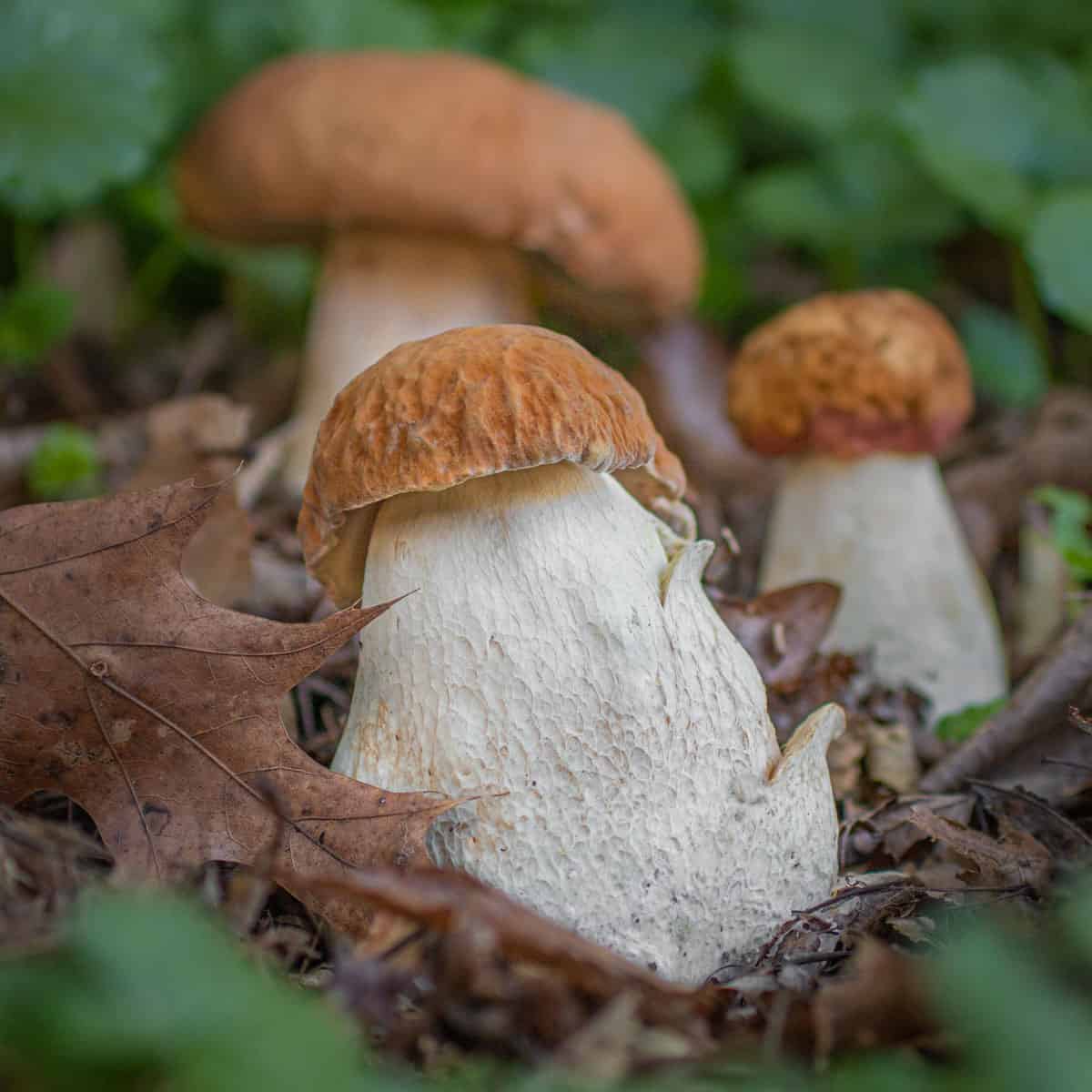 Pictured above is not the dried mushrooms you see in the grocery store. True, North American porcini can be insanely difficult to hunt, and even when you do find them, others may have gotten to them first. The window of perfect harvesting can be a couple days, and that is why these are truly treasures of the woods.

I’ll remember my first porcini hunt forever. I was at work in the kitchen when my mushroom hunting/disc golf partner sent me a photo of some mushrooms he’d run into, asking me what they were. When I saw the picture I told him: “take them all!” I knew that fresh porcini might be around in our area, but I’d never seen them myself.

The button stage, or bouchon, is the most coveted. But, it too me over 5 years to find my first ones that looked like these. Good luck!

I went with him to the spot the next day. The porcini were sitting on the side of the woods where our favorite chanterelle patch was, hidden, waiting in the grass next to the old oak trees. I’d read about them for so long but never picked them, it’s really an experience to see these guys growing, like something out of a fairy tale.  It felt like every one we found was calling to us and put there just for us to find.

After taking a few pictures we left, making sure to not leave a trace of them since mushroom hunting has a way of making everyone secretive. Once you find something somewhere, anywhere, it feels like it should be your patch. I even cut out the buggy stumps and threw them in the dehydrator to make powder via the coffee grinder. 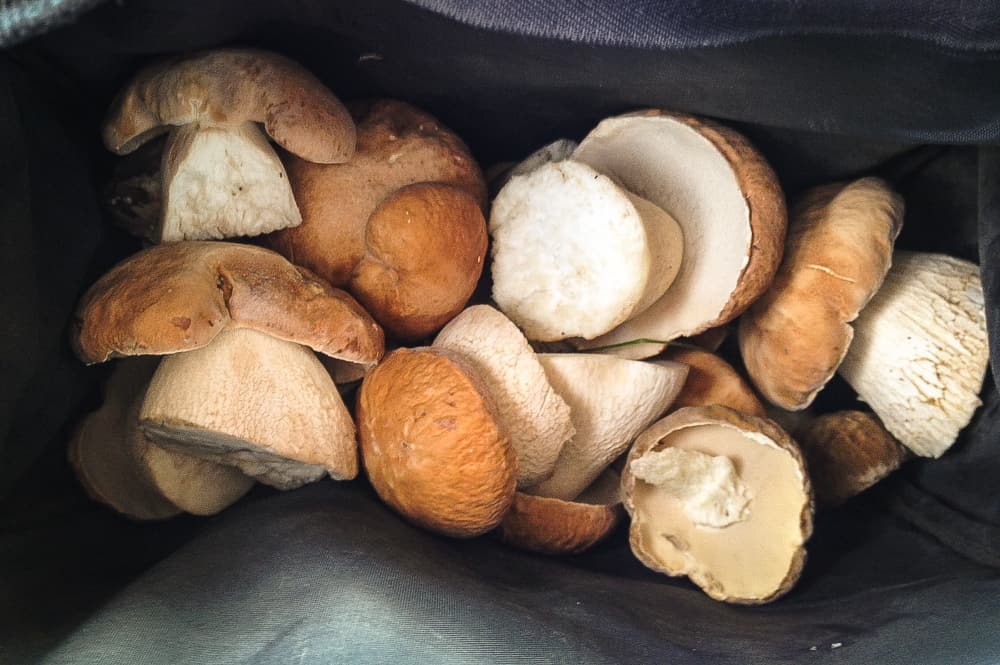 Perfectly young porcini, these are what you want.

Unfortunately, we learned Boletes have a very short life cycle. The king boletes that we found were good for about 2 days, that’s it. After that they turn into maggot hotels, if their in the ground, or if they’re in your fridge. A couple days later you’ll go back  to the patch and see nothing but a puddle of black slime on the ground where the mushrooms used to be, although you can always hope for some young buttons. 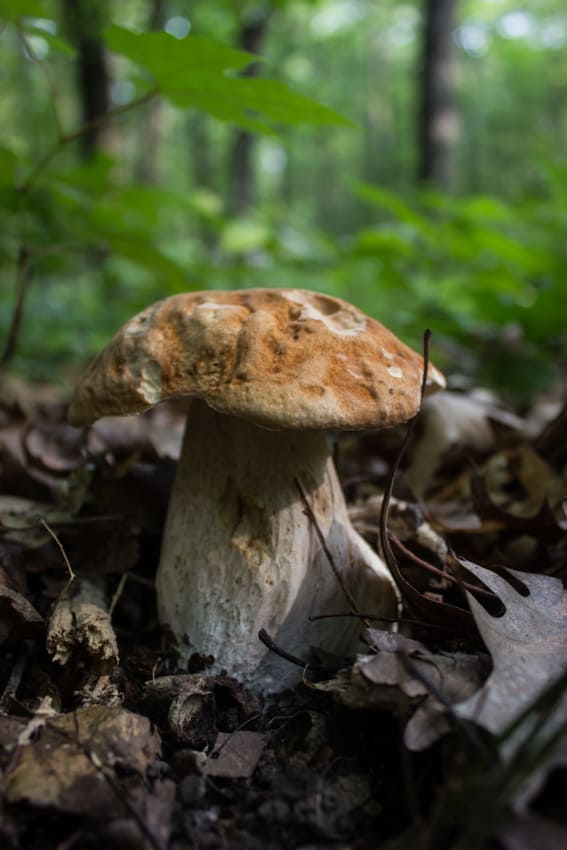 See the nibbles on the cap? This guy is mature, check for bugs.

The King Boletes pictured here like to be around oaks where I live In Minnesota, which is where the majority of people find them. I have the pleasure of knowing a few friends from Eastern Europe in the area though, and they prefer to pick porcini in areas with pine trees, which is more difficult to find from my experience. Even though it’s more difficult, it’s definitely worth it to hunt for porcini in pine, where I live, the pine porcini are much more resistant to bugs that tear the oak loving porcini to shreds. Pine porcini I’ve seen in the Midwest will also have a slight red color to their stem. If the pine “porcini” are truly porcini, I don’t know, but I know they’re delicious.

“Porcini” That grow with pine in Minnesota.

I’ve found them in the woods, but I also find them hiding in long grass on the edge of the forest, so it’s a good idea to check around the forest peripheries while you are hunting for shrooms in the summer, especially on little slopes. My best patch is a slope of about 60 degrees, with long grass right on the edge of a chanterelle patch rich in white oak. They will start to fruit, from my experience, right before the Chanterelles start to fruit in the summer, then sporadically throughout the summer in other places as well, rain providing.

Along with knowing the right trees, the other important thing for hunting porcini, and other boletes, is keeping tabs on the rain. After a strong summer rain, I like to wait a day or two, then I check my porcini patches. If I find just one porcini, I uncover the leaves in the area and look for the young buttons, which can be completely invisible, buried under leaf cover. Unfortunately, they are at the best eating stage when at that size, since, as they grow and rise above the leaf litter, the bugs will have likely gotten to them before you. If you find old porcini though, you hit the jackpot, as now you have a place to back and look for them after the next rain, and then in the years to come. 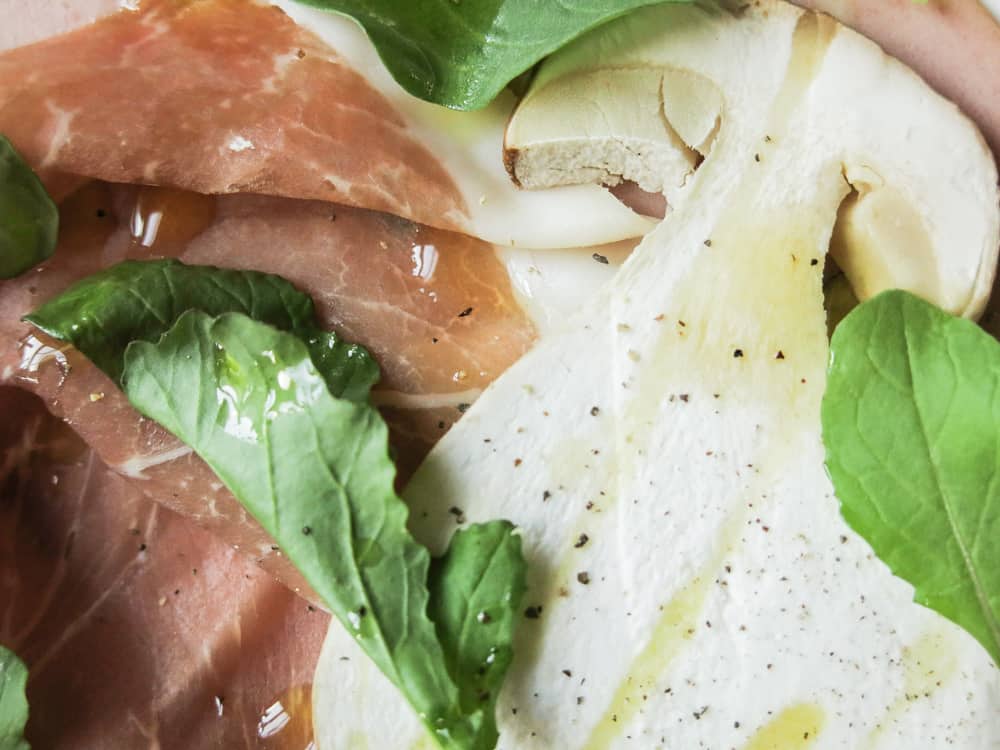 Porcini are one of a few wild mushrooms that can be eaten raw safely.

If you find some perfect fresh porcini you’re a very lucky person, throw them in a pan with butter and salt, slice them thin and eat them raw, whatever you do, by all means enjoy them in their fresh state since they’re an experience most people will never understand or appreciate.

Unfortunately, porcini and boletes in general are parasitized quickly by bugs, as in more quickly than any other mushroom I’ve ever found or cooked. Typically I have to dry these to concentrate their flavor and get around their short shelf life/bug damage.

A Wild Mushroom You Can Eat Raw

Yes, you can eat porcini raw, and it is very common, especially in Italy. That being said, it’s a good idea to start off with small amounts, say a slice or two. Eating these raw is one of the purest ways to taste the flavor of one of the most sought-after mushrooms in the world, but, to compound the frustration of even finding them in the first place, only the youngest buttons you can find, without bug damage should be eaten raw in my opinion. Theres an example of a recipe for raw porcini below, but something as simple as really good olive oil and salt is just fine. 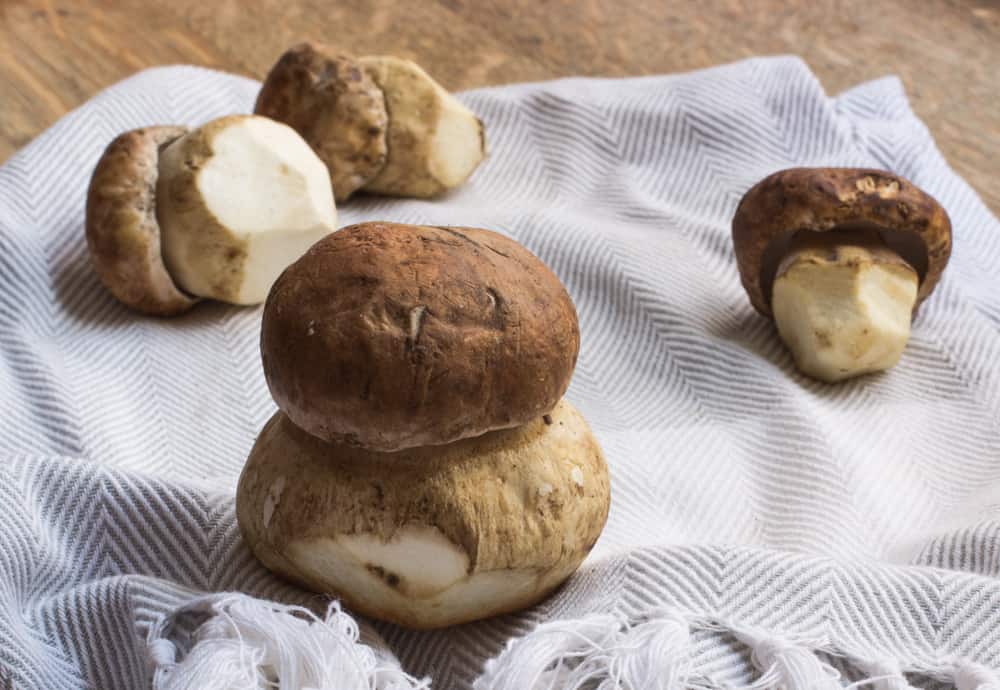 Small mushrooms, looking like they came from a fairy tale. These are Boletus rex-veris, also known as the spring porcini, which I used to source for a restaurant from Oregon.

There’s a couple boletes that looks very similar to the Porcini. The most widely known in North America goes by thge name Tylopilus felleus, and it’s horribly bitter, although not poisonous from my knowledge. How I can usually tell if a mushroom is a felleus is that it will be growing directly from wood, which king boletes do not, also it may have a pink hue to it’s pores. You can also tell if a bolete is bitter in the field by nibbling a small piece of the mushroom and spitting it out.But, I know of one person who preserves them in maple syrup and puts them on ice cream, and another that uses them to make bitters for drinks. To each their own, I guess. 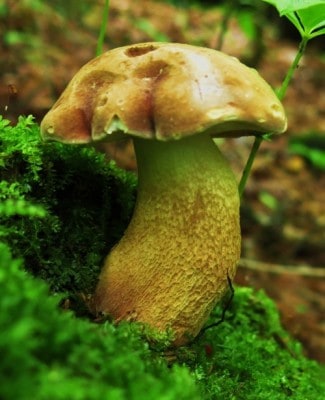 The false porcini, Tylopilus felleus, is bitter as hell.

If you’re like me, the first porcini you ever cooked was probably dried from Italy. American porcini don’t taste like Italian porcini do, they’re much more mild when dried. The reason is that they’re aren’t the same species, technically. We don’t have one species of Boletus Edulis across the world, rather within the Boletus genus are many sub-species, with mycologists continually discovering new ones, and regularly re-classifying those we’ve already discovered. I don’t know exactly what the species are I pick in Minnesota and Wisconsin yet, and there’s nothing wrong with that.

That being said, it can be difficult to know sometimes exactly what bolete you have, and if that bolete is “porcinoid” or not can subject to a little creative license. The best advice I can give is that I have tried and true patches where I can expect them every year, rain providing, but I know some of them might have slight variations. There might be a slightly darker cap, or a slightly lighter one, or side by side one might taste a fraction different than another. At the end of the day, if you have a basket of “porcini”, relatively free from bugs, you won’t care that much about slight differences in species. We have many porcini, so enjoy the mystique while science allows it to last.

King Boletes are good to eat fresh, but finding young, untainted specimens (Also known as “Bouchons” or wine corks) will be nigh impossible from my experience picking them, at least until you have a series of reliable patches. There have been a few times when I’ve picked perfect buttons, and I’ll provide you with some recipes for them, but it’s not easy to come across them small, firm and perfect, and as I mentioned, at that stage in my area they’re often invisble, and covered by leaves.

These and most other boletes also have really short shelf lives when they are fresh. You have only a few days to use them. Drying them is absolutely your best bet to retain and concentrate their flavor. Although they can definitely be pickled or stewed and frozen. 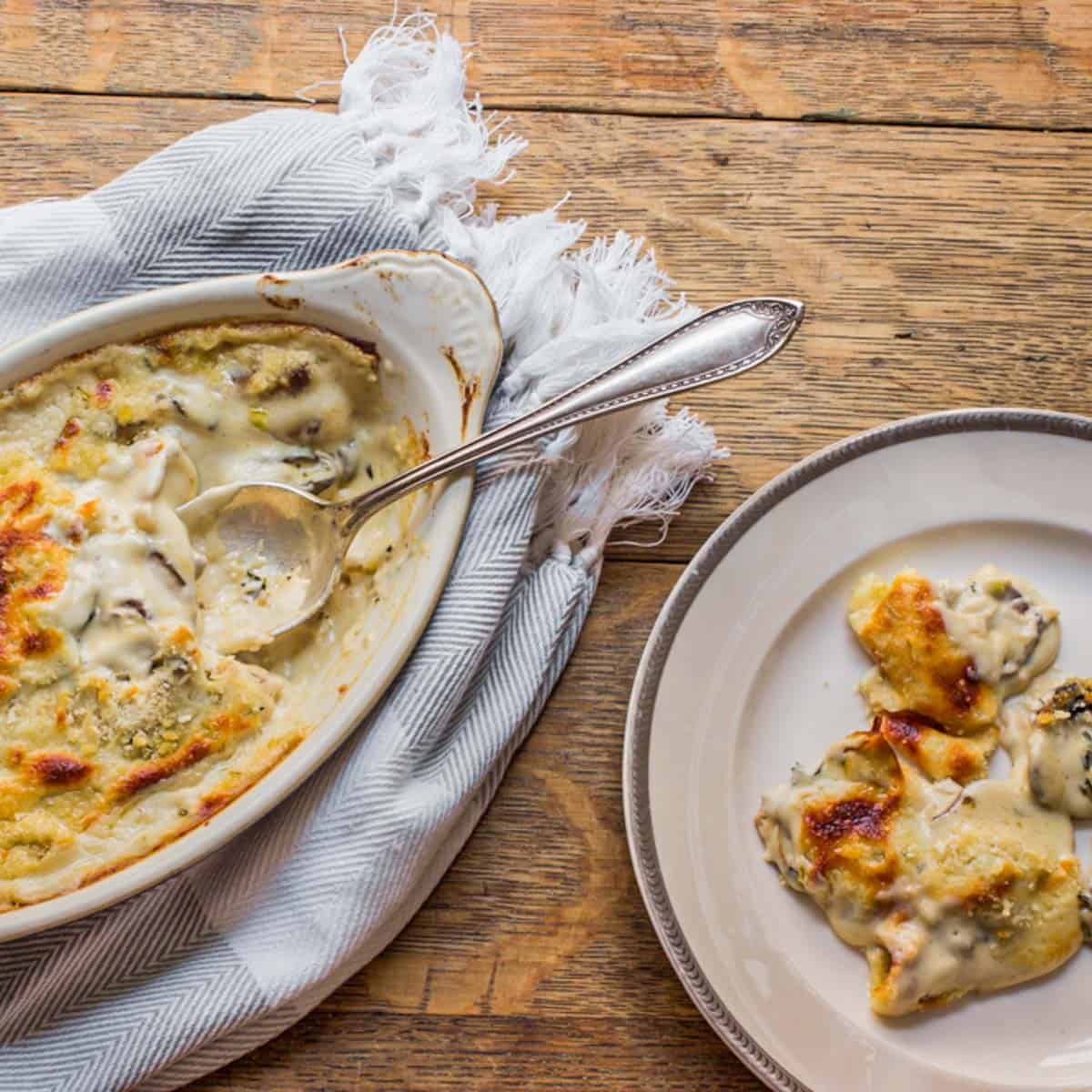 Baked Julienne of porcini is an Eastern European favorite.