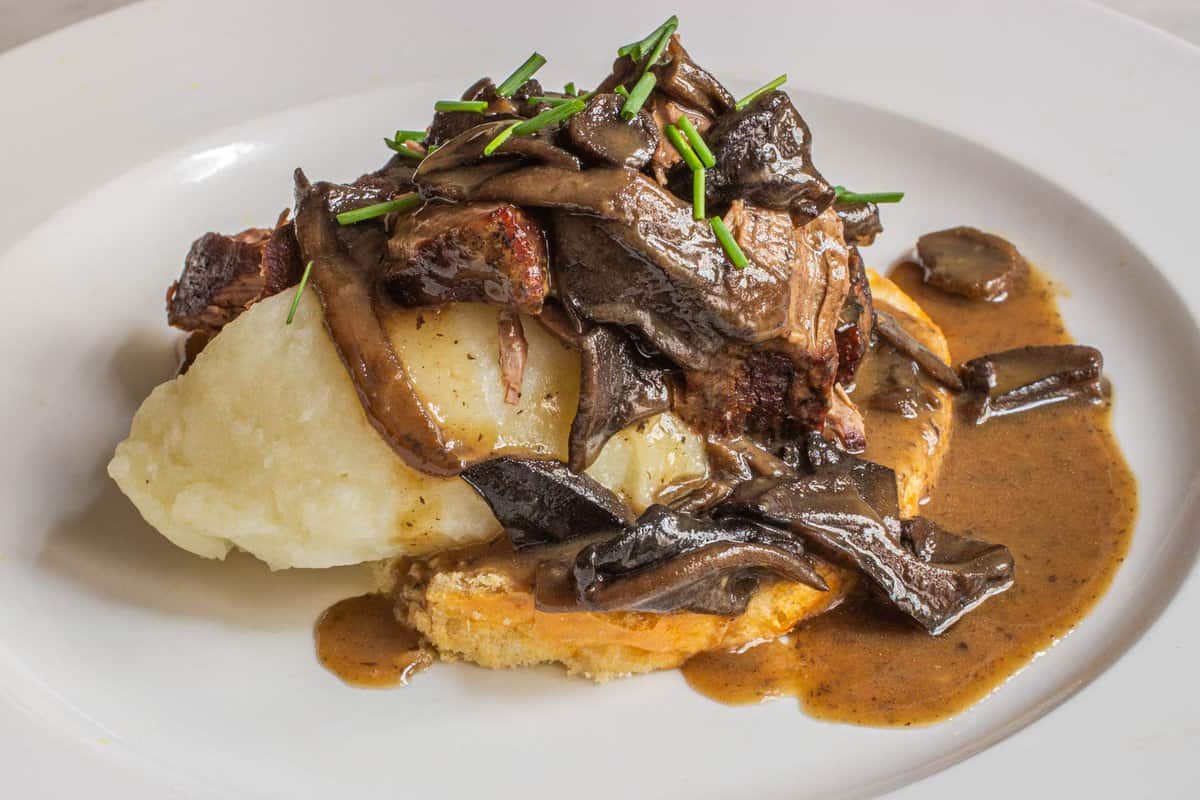 Childhood food memories, everyone has some, those dishes that take you back in time. A hot beef commercial is one of mine.

It reminds me of being a kid, about waist high on my Father. My dad and I would make trips back and forth to Willmar Minnesota from Grove City where the family farm is, and where he still harvests an impressive amount of corn and soybeans.

Our trips into town varied. Maybe we were going to church on Sunday, picking up some lumber at the yard, or some spare parts from a hardware store. Sometimes, we'd stop at a little diner called Hillcrest right outside of New London, to grab a bite to eat.

Hillcrest is a working man's joint. It's perched on the top of a hill, and it's the spitting image of your textbook truckstop/diner, looking like a lighthouse, a trucker's beacon. They even advertise on their website that they have an extra large parking lot for overnight stays, which is pretty endearing.

The menu, from what I remember is your typical truck-stop fare: breakfast, lunch and dinner, a couple pies and desserts. There was pretty much only one thing my dad and I ever ordered when we ate though: hot beef commercials. 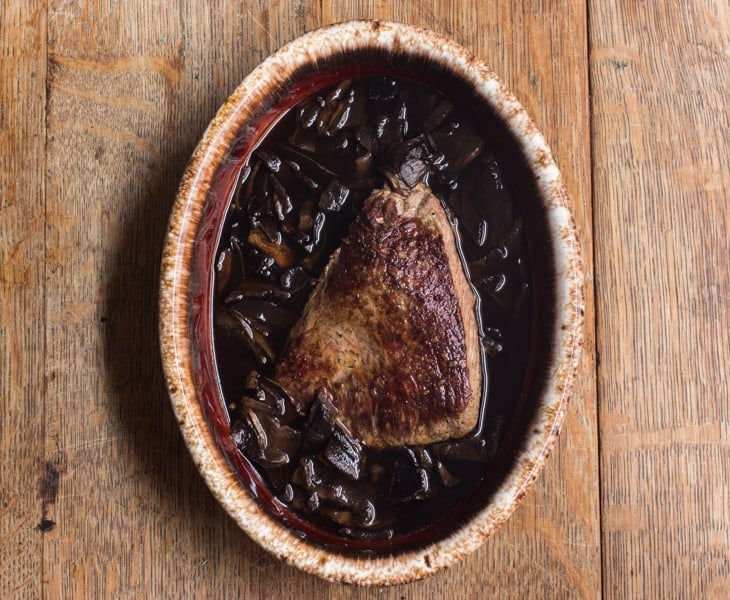 I used a sirloin, but any cheap braising cut, like chuck, is fine.

If you've not familiar, here's the jist: You take some un-toasted bread, top it with a scoop of mashed potatoes, some hunks of cooked beef, and smother the whole shebang in beef gravy. It's simple, and pretty much the ultimate nap time food.

Heck, after poking around a little bit I even found an entire blog dedicated only to roast beef commercials (It's awesome), as well as a note or two mentioning it as a special served at the Chatterbox Cafe in Lake Wobegon, Minnesota- a fun town I used to visit about every Sunday around dinner time.

As for the how it got it's name, account vary, but one that has held weight with me is that the beef commercial was a favorite of traveling "commercial people", a.k.a. salesman.

The reason this has been on my mind is that I've been talking on and off with two friends of mine: a husband/wife-professional food photography and styling duo. They're a crazy talented team, but beyond that, I'm silent, for now. 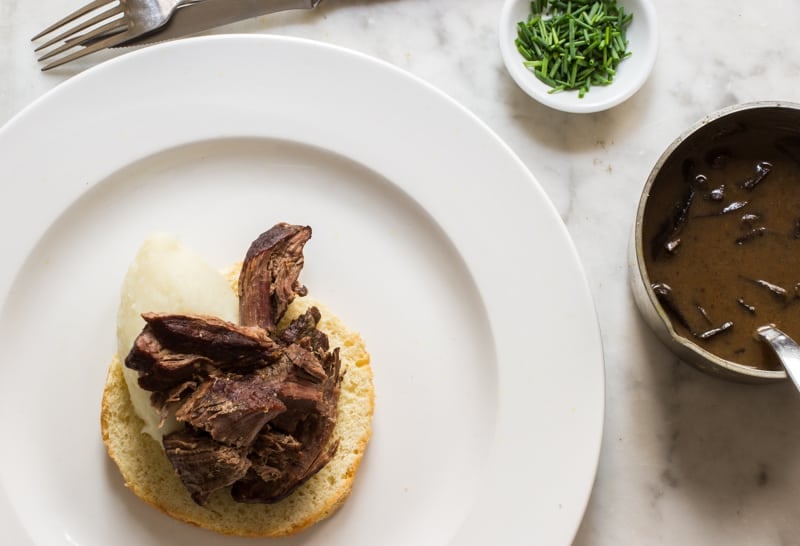 My friends asked me to contribute some recipes to an upcoming book involving Minnesota Cuisine. It took all of about two minutes to jot down some fun, Midwest style recipes. On the top of the list was a sexy version of the old beef commercial I used to eat with Dad.

I didn't want to change it much, it's still mashed potatoes, toast and gravy. The gravy is the secret though, it's imbued with an unsung hero of the boletus family, hot cousin of porcini, and a mushroom I only really use dried: Leccinums.

Leccinums are an under-appreciated mushroom, which is easy to understand after you eat some fresh-they're very mild. This changes when they're dried though, their flavor gets concentrated, and rich.

You should know that some people have experienced gastric upset when eating orange cap leccinums. I haven't ever had ill effects if the mushrooms are dried first, but it could be possible-just a heads up.

The largest here was over a ft tall.

The hot beef commercial turned out really, really good. After I cleaned the plate I got the same fuzzy feeling you get after Thanksgiving dinner, and then I went to sleep.

Dad, when the cookbook gets published, I'll make this for you. 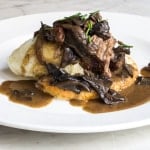 Yield: About 4 dinner sized portions, depending on appetite 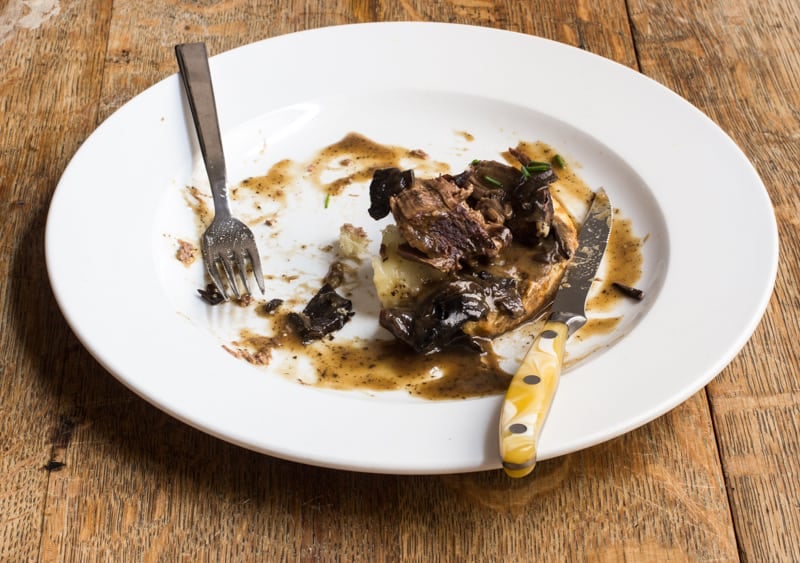 This is about the time when you start to get sleepy