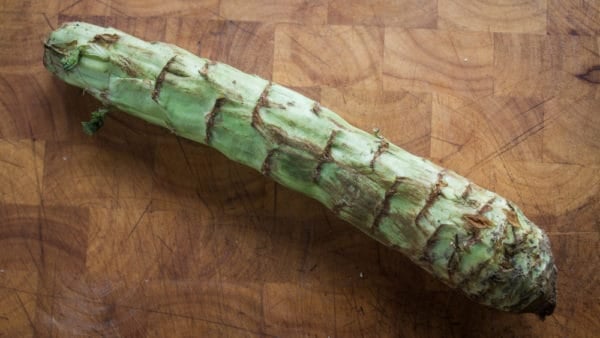 Celtuce: a vegetable that resembles a green magic wand.

With it’s beautiful emerald green color, crisp and refreshing texture, with delicious, mild, and faintly nutty taste and smell, Celtuce is the best vegetable you’re not eating. What the heck is it? Well, besides from resembling a strange green wand, often with runty little lettuce leaves on top, celtuce is what I’d describe as a stem vegetable, a type of food that we’re not used to eating in the U.S..

Basically, celtuce is indeed a type of lettuce, but, instead of the lettuce being grown for it’s leaves, the stem is harvested and cooked instead. The leaves are edible too, but as celtuce often has quite a journey to get to specialty grocery stores and ethnic markets, the leaves will usually be wilted and unnatractive by the time the get to market. If you’re wondering why you’ve never seen it, it’s probably because this stuff can be hard to find, especially if you shop at American grocery stores.

Americans, as a general rule, don’t have an appreciation for vegetables compared to many other cultures around the world. To get exposed to some new, exciting ingredients, take a trip to a local Asian market. You’ll find the vegetables lack a homogenous quality, and, are generally super cheap. A cheap price for veggies does not insinuate a lack of quality, but thats another story. All their veggies are subject to the same inspection as other U.S. grocery stores. I shop at Asian markets for most of my vegetables (not meat though) and have never had a problem, just be choosy like you would anywhere else.

How to peel and cook

Preparing this stuff is easy, but know that the outer skin is tough, and you’ll struggle to peel it without a quality peeler. After you peel it, you’ll need to peel it again to get underneath the fibers that lie under the skin to reveal the beautiful, jewel-colored heart. You can also just cut it into sections with a sharp paring knife, and make it square, which makes the cutting and shaving on a mandoline I’m going to describe for you is really easy. 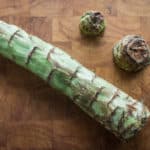 Wash, then remove the top and bottom. 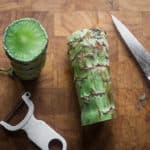 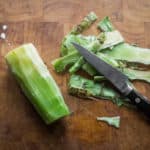 Carve off the tough skin with a knife or peeler. 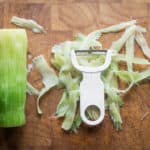 Continue peeling until you reach the tender heart.

Shaving is the most even, and also the first step of a nice julienne, or matchstick cut. To make it easier, you can cut the celtuce stalk into a rectangle for perfect square sides, if you like. 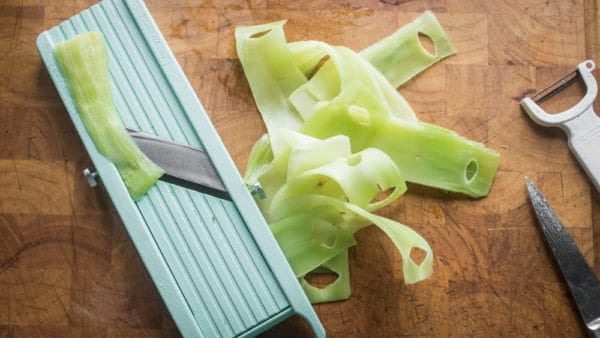 Use a mandoline for even slices.

After you shave the celtuce on a mandoline, you can cut them into lengths of a few inches, stack the slices together, and cut into matchsticks as fine as you like. The finer the julienne, the more delicate the texture will be. This is a great beginning for a cole-slaw, but don’t even think about adding mayonnaise to it! 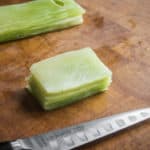 Lay thin slices on top of each other 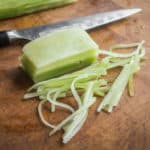 Use a sharp knife to cut a fine julienne

This is the easiest way to make a shaved celtuce salad, which could also double as chilled vegetable noodles. Cut the celtuce into manageable lengths, then sqaure them off, and use a vegetable peeler to make paper-thin ribbons. 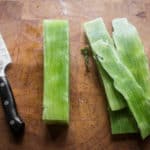 Square off into rectangles for easy peeling. 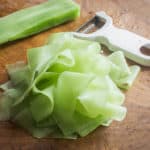 The best thing you can do to taste celtuce’s sutble, slightly nutty taste is to do as little as possible to it, season it lightly, and don’t get too creative. Also, some sources online might suggest soaking cut celtuce in water to make it crisp, but this will ruin and dilute the flavor, leaving you with a crisp, but watery, bland finished product. For inspiration, look to China, and other vegetables with a similar texture. For example, you could use celtuce anywhere you’d use the following vegetables:

For flavor pairings, think cool, refreshing, and cold preparations. Celtuce would love to be shaved into a vegetable slaw, or quickly tossed with a light, oil-based dressing, and a dash of something sweet. The first time I worked with it, I thought it smelled a bit like sunflower seeds, so I used that as my inspiration. 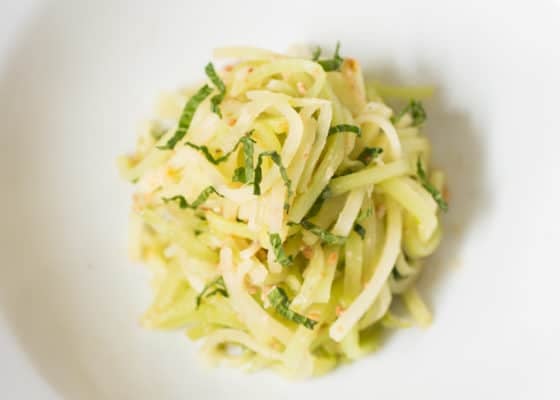 A simple dressing of pounded, toasted sunflower seeds, their aromatic oil, a hint of spearmint, and a touch of sweetness.

Traditionally you might see celtuce paired with sesame, and that’s great too, but as sesame is stronger tasting than sunflower seeds, you won’t taste the natural flavor as much, which isn’t necessarily a bad thing. My favorite prep for these so far is a fine julienne, seasoned with a paste of sunflower seeds, a touch of maple sugar, and virgin sunflower oil, similar to Japanese gomae made with spinach.