Take a look at how their caps shine, do they look sticky? They are.

This is the “original” slippery jack.

Original in that it really possesses to a T the characteristics associated with suillus species: slimy, sticky cap, and the presence of a veil covering the gills when young, which eventually leaves a ring around the stem.

Even though I had read about it for a while, it did take me at least two years to find my first ones of this particular species. I had to go to the pine forests and watch the Russians pick them to know truly what they were. I had seen other slippery jacks, such as chickenfat boletes, but this one was the big daddy, the one and only Suillus luteus, beloved by Eastern European mushroom hunters around the world. Chicken fat boletes are similar in that their caps can be a bit moist, but S. luteus is the absolute definition of slimy, in the surface of it’s cap at least.

Most of the time I see field guides simply label this slippery jack as “edible” or sometimes “edible with caution”. The caution part comes in because it must be peeled before eating, unlike the chickenfat bolete. If the mushroom’s slimy cap covering is not peeled off and removed, it can cause gastric upset, although this has never happened to me. 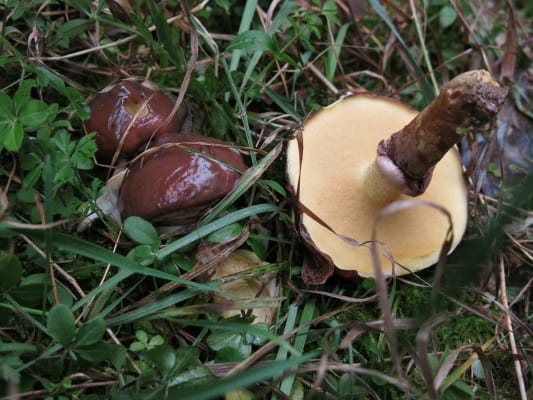 These grow in the late fall in Minnesota from my experience, around the same time as other slippery jacks. Look to coniferous forests. When I am looking for these I usually notice other slippery jacks as well that are very easy to see, chicken fat boletes, for example.

The forest I most frequently see them around has a large number of eastern white, and Norway pine. When large and mature these will be even more intimidating in the kitchen, so you need to find fresh, young specimens. You will need to know exact trees they grow around to find tiny buttons, but once you know a spot they grow, keep checking it after rainstorms when they start start to fruit and you will find small, perfect keepers. They are really at their finest when the thin veil covering the gills is not yet broken.

These can be a little tricky. If you don’t peel the caps and stems, inspect them for debris, and use them with due haste: you will probably hate them. The cap’s covering and sometimes it’s remnants on the stem are not good to eat, they must be peeled off, as one might the skin of a carrot. When peeled properly, you will be left with nice, firm mushrooms, as long as what you picked was young and pristine. These are not really mushrooms that I will sit down and scarf a plate of by themselves, they would much rather be utilized in some sort of preparation to add background interest, such as in a chicken soup, or in a sauce to compliment meat.

As far as preserving them goes, drying is my first choice. After reconstituting, the mushrooms will still show a bit of their slipperyness, but it will not be as squishy and full of water as fresh specimens are. Another reason to dry them too is that slippery jacks, like most boletes, have a shorter shelf life than many other mushrooms. In addition, when dried, they transform and take on an aroma that is very different than when fresh, it’s rich and woodsy, like a bolete, but different. Dried Slippery jacks tend to develop an immediately recognizable scent that is pretty strong- I would describe it as a bit of an “acidic” tone to the nose, S. Luteus is a perfect example, as is the chicken fat bolete.

Recipes I’ve made especially for slippery jacks, or where they can be easily substituted. The escargot and homemade ricotta cheese with slippery jacks are my favorite with these.