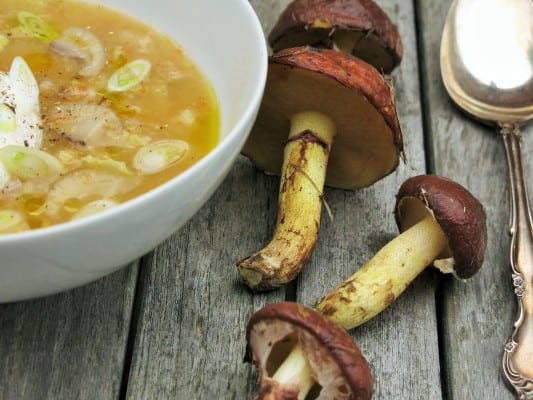 I have come across Russians picking slippery jacks in a particular local park I frequent. The first time I saw them there, it was groups of old Russian Grandmas out picking chicken fat boletes. The next time it was a group of elderly Russian ladies and men who split into two different groups, the men lazily picking and drinking vodka, the woman speaking with the sharp tones and inquisitive soundss I associate with gossiping. The last encounter I had with the Russian mushroom pickers ended up being me and an old Russian guy, neither of us able to speak the other one's language. I'll tell you about it.

I was going back to check the saffron milk cap patch for the umpteenth time. On the periphery of the areas thick with eastern white pine trees there are other spots where I always seem to see Russians concentrating since they have hit slippery jack paydirt. This was part of the way I discovered the goldmine of saffron milkcaps in the first place. I watched them, noticing the way they would upturn the dense needles on either side of trail with something of a possessed fervor, snatching every slippery jack they could.

On this day it was cold, it hadn't snowed yet, but it sure felt like it was going to, especially early in the morning when I like to get out and have a quick hike. On my way to the saffron milk caps grow I noticed a multitude of other mushrooms  that I had yet to identify. They had black caps with a grey stem, and I suspected they could possibly be Russula xyanoxantha, a prized edible called “The charcoal burner”. I picked a couple of them and some other small milkcaps I suspected to be Lactarius volemus, hoping if I keyed them out later in the field guides I could uncover some interesting information, and potentially a new species to experiment with. I moved on to the saffron milkcap patch, it was pretty much a ghost town as I had hit it pretty hard the last time I was there, bringing some friends from work with the hope they could help me fully uncover more space in the patch.

Finding the milkcap patch near empty, I started back on the trail to the car. As I walked to the car I heard a rustling in the pine trees; someone was picking mushrooms. I always feel the need to spy on others who participate in one of my favorite hobbies, that day, it was a Russian Gentleman. He was much older than me, I’d say around 65-70. His clothes were dark, he was wearing a jacket I would imagine a janitor would wear, dark blue, faded and ripped in places with age. I was curious to find out what he was picking, so I waded through some pine needles and approached him. I announced:

Me: “Picking some slippery jacks?”

The old man just stood there and looked at me, I couldn’t tell if he was angry or what. Then after he spoke I realized he knew no English, as in zero, nada, zilch. I motioned for him to show me what was in the large cloth bag he was carrying. He opened it up and let me see his score for the day. His bag was large, way bigger than a paper grocery bag, and it was filled with slippery jacks and another mushroom that looked like the suspect charcoal burners I had taken with to try and identify.

Curious to see if we had been picking the same mushrooms, I took one of the black mushrooms I picked out of my bag and showed it to him. I watched his face transform into a look of horror. “NO!” he shouted. He then reached for my bag and proceeded to inspect it thoroughly. The old man knelt down and went through every single mushroom in my bag. He knew no English, but he did know the words “yes” and “no”, so that is how we communicated. If he said no, he would fling the mushroom back into the woods, If he said yes, he would put it on the ground in a little “keeper” pile.

Eventually he came across a couple of perfect buttons of Suillus luteus that I had picked and he held them up to me and said “YES”, in a tone with which one might scold a child. After he had sorted through my entire bag, he just turned around and walked off to the next tree, and continued about his business.

It really struck me later that I had been part of a caveman conversation. Maybe caveman sounds too primitive, another description might be a "trancendent linguistic experience"? Anyway we talked without using words, and it was pretty cool. Even though he didn’t know me or speak my language, he showed empathy for me, and wanted to make sure I didn’t poison myself. I liked that, and later in the day I found myself wondering what he would be making back home with his mushrooms. Not only is cooking often therapeutic and relaxes me, but it is also is a medium through which I can explore other cultures. I wanted to know what the old man cooked, and I wanted to make it too.

I can guess that he had meager means, his clothes were ripped and old, and he smelled like a straight up hobo. There would be no fancy ingredients or meat in the dish. Soup is and always has been the ultimate poor people food, put some stuff in a pot, put some water on it and cook it, that’s it. Another classic poor person food I know of also makes a great soup…cabbage. (Historically cabbage was the great sustainer of life in most of Europe, the potato took over eventually but was brought from the new world) I needed to make slippery jack and cabbage soup.

My little soup is something that I would imagine the old Russian mushroom hunter might make,although it's probably nothing close to anything traditional. I will probably never see him again, and he will never read this, but I think he'd like it. 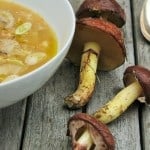 Serves four as a light vegetarian entree, to be accompanied by some crusty bread or a little salad for a meal
Prep Time30 mins
Cook Time45 mins
Servings: 4