I've been saving a bag of wood ear mushrooms my friend from Forest Mushrooms gave me the last time I saw him for a good batch of hot and sour soup for months. Wood ears are special in that, after rehydrating they're nearly indistinguishable from their fresh state. Finally I got around to using them in a batch of hot and sour soup, and I can tell you—this soup (and plenty of others too) are a traditional use for wood ears, for a reason.

The only problem was my first batch of hot and sour soup turned out awful. Terrible. I made a nice rich, mushroom stock, simmered it low and slow with dried chunks of Ischnoderma resinosum I'd been cooking with. The stock tasted great when it was done: rich and dark—perfect for soup, right? I also used some of my expensive chinkiang vinegar, which is black like balsamic.

Unfortunately, using those ingredients to make the soup, especially after adding the egg, turned it an off-putting grey-brown, the sort of mud color that happens when kids mix all the fingerpaint. The stock I spent all afternoon making, as well as the jet black vinegar and soy sauce all played a part in the aesthetic failure.

You want a light, clear stock for this, and, to be honest, I tell you with no shame that grocery store chicken broth is where it's at here. For the vinegar, you want rice wine vinegar, since, similar to the chicken stock, it's clear, and bright, but most importantly, light-colored. The second and third batches of this I made using the same template, but with clear-colored rice wine vinegar and light chicken stock were really great.

The end product is just the tangy bowl of traditional tasting goodness I crave in hot and sour soup--no funny business. I encourage you to get creative with your mushroom varieties though.

There's lots of fun soup mushrooms out there you could pick from here. For hot and sour soup, I usually see wood ears and maybe shiitakes in my references, but it would be a shame to just use those. Matsutake would be excellent, but I didn't have any. Yellowfoot chanterelles are wonderful in soup though, and I had a good handful of tiny ones that look great in soup, and keep their color cooked in liquid.

This is the perfect place to use some of your mushroom ketchup, but not just any mushroom ketchup. Since we're trying to avoid brown colors here, I use ketchup from light-colored mushrooms that you could make from chicken of the woods, dryad saddles, or lobster mushrooms. Traditionally soy sauce is used, and you can use it in a pinch, but you will definitely taste the mushroom ketchup in the finished product, and it is special. For this I used my koji-cured dryad saddle shoyu. 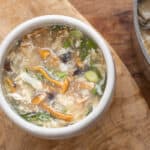