Behold the resinous polypore, inspiring chefs around the world with it's seductive, appealing name! Probably not. Either way, this is an interesting mushroom you've probably seen but never thought about eating.

When I first started cooking with this mushroom, I'd never seen it in a field guide, or heard anyone else talk about it as an edible, I just used my chef intuition. As far as I know, I'm the first person to spread the message about eating resinous polypores, and, now years after I first put this post up, plenty of people have come to enjoy this mushroom, that you can get for free, in your local woods.

Ischnoderma resinosum grows on hardwoods and conifers (I have only seen it on hardwoods in Minnesota). If you've seen it, you've probably passed it by thinking that it looks too hard to even be edible, and you would be correct, if it's mature, and has been growing for a while.

Just like vegetables and animals, the age of mushrooms has a lot to do with how good they will taste. An old lamb will have a much stronger flavor from a young one, and a cauliflower left to bolt and flower will be much more bitter than one that's younger.

Our resinous polypore here is the same. Older resinous polypores will be tough, like a wood plank, and pretty much impossible to cook with-I used to think they were a novelty, like Ganoderma applenatum/artist's conch, a mushroom that's only use is pretty much as tinder, or for drawing pictures on.

So one day I was out hiking and I spotted some very young Ischnoderma. I wasn't having much luck hunting other summer mushrooms, and I thought I would go check them out, for the lack of anything else growing nearby.

I remember touching some of the young mushrooms just budding from the tree and thinking to myself: "those feel sooo tender". My mouth started watering; I just knew I could eat them. If I know one thing about cooking with polypores, and mushrooms in general too, it's that the younger the mushroom, the more delicious it will be. Polypores in general are more generally safe too, from my experience.

When you bring your resinous polypores home, even after you trimmed what appear to be the softest parts of the mushroom from the tree, you'll probably be left with a bit of woody trim.

There's no reason to throw those woody pieces out, and they will lend a great color to soups and broths, just like the tender pieces, with the bonus that you can hold them in the pantry instead of giving up valuable freezer real-estate.

I took the ischnoderma home and got experimenting. After cleaning with a quick rinse, I made sure to trim them just like I would a chicken of the woods-using only the tender young margins, the closer it gets to the tree the more tough it will get.

In the kitchen the first thing I tried was the basic saute, I heated some grapeseed oil and threw them in the pan, added some salt after they started to brown, and finished with a knob of butter. They were ok, slightly chewy, and just ok.

The second way I cooked them was stewing with some salt and herbs to release their juice, then reducing the juice, allowing the mushrooms to gradually caramelize in their own liquid.

After one taste of the second method, I was sold. Basically the Ischnoderma, like most mushrooms, has a lot of water weight. when that water is released and then concentrated, their flavor blooms and comes alive. The flavor is much richer than I expected, there's a deep richness to them, a great umami quality.

Taking into account their tasty liquid, I modified my older mushroom conserve / pickled mushroom recipe for them. The preserved mushrooms are great reheated gently and added to rice, pasta, or on top of a steak, it's one of the most basic and versatile recipes I know. You don't have to add the vinegar to the recipe, but the mushrooms will go bad in a couple days if you don't.

All of that being said"resinous polypore" is not doing it for me. I have yet to come across another common name for this mushroom, so I think we should come up with one. Considering how soft and velvety they were in their young state, "velvet polypore" sounded nice to me. Anyone else have some ideas?

My friend professor Greg Thorn recently mentioned to me that those of you who might see Ischnoderma species growing on conifers (Ischnoderma benzoinum) may want to proceed with caution. Just as conifer-eating Laetiporus huronensis (chicken of the woods) can give some people gastro-intestinal distress, it is possible the same could be true of Ischnoderma benzoinum.

That being said, years after I initially wrote this article now (and after discussing how much of an underrated edible Ischnoderma resinosum is with a host of mushroomers around North America), I haven't heard of a single instance of digestive problems with this species, yet. Keep in mind tolerances and sensitivities vary greatly from person to person with mushrooms. 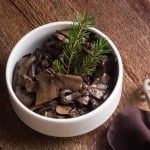 This recipe is for 3lbs of fresh mushrooms, which makes a good amount of conserve. Feel free to scale it down by ½ if you need.
Prep Time20 mins
Cook Time30 mins
Course: Side Dish, Snack
Cuisine: Italian
Keyword: Ischnoderma resinosum