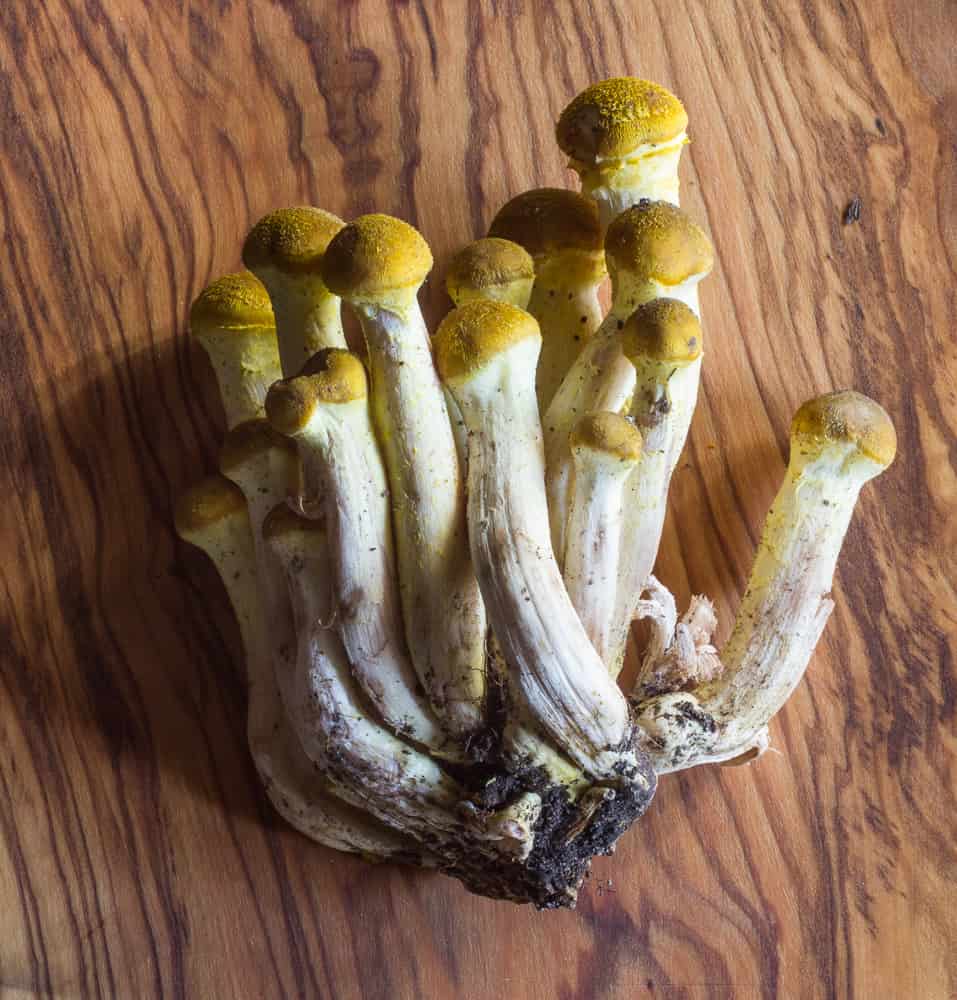 Very young honeys are the best.

Honey mushrooms are one of the best fall mushrooms out there, with a caveat or two. If the conditions are right, you could walk out of your favorite patch of woods with a literal truckload of these, it’s all about timing though. When I describe them to people who want to start picking them, I usually say something to the tune of “lookout for patches of mushrooms that grow like an infection”.

Honeys are a parasitic mushroom, infecting trees and whole swaths of woods. Even when they’re not fruiting, you can be on the lookout for areas they might like, my favorite variety grows on oaks, so I look for forests with hardwoods filled with dead and dying wood. On a side note, the honey species I like enjoys the same type of terrain as hen of the woods too, and I often find them together. 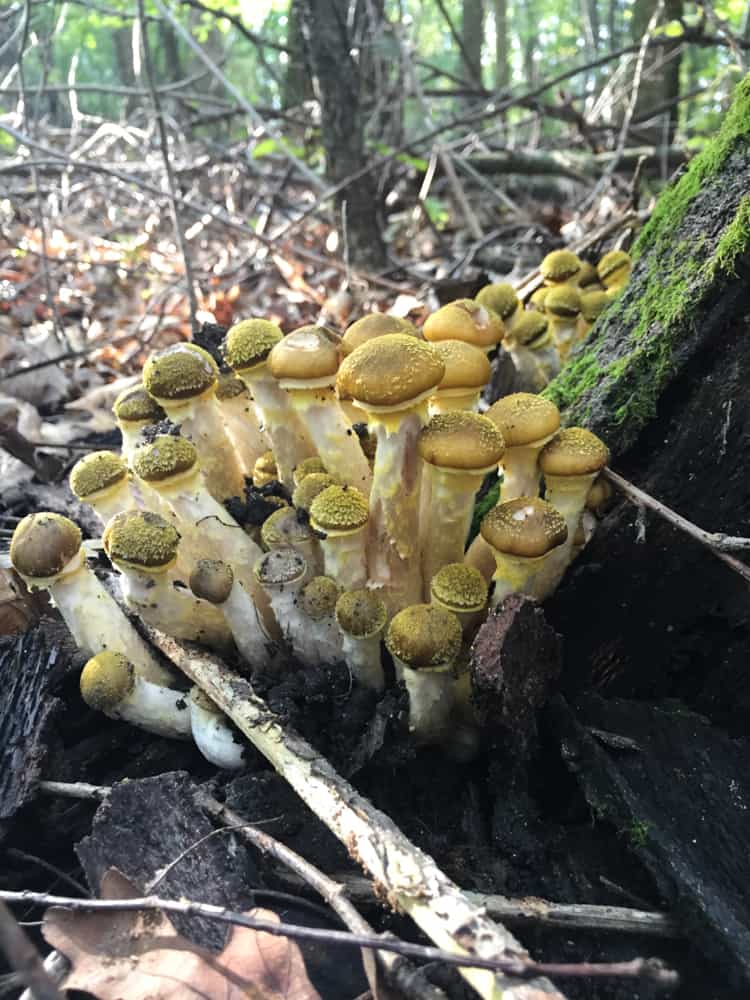 You’ll start to see these in the fall. 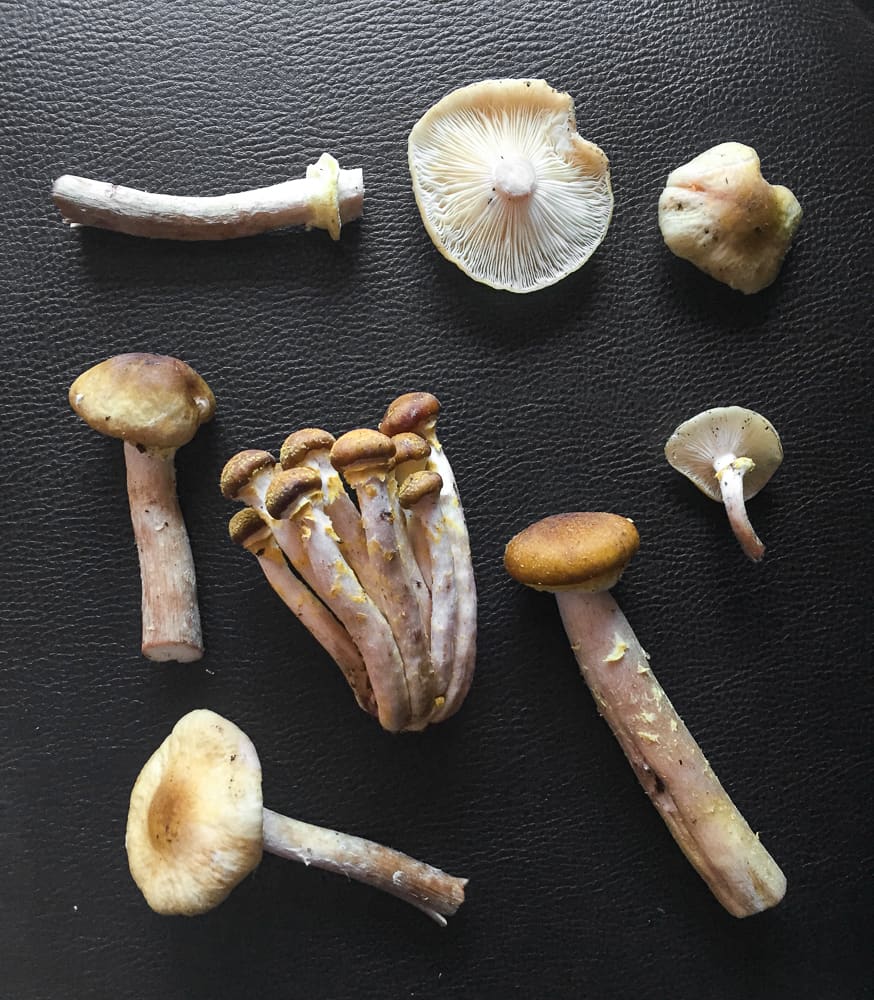 It’s not technically correct, but I usually think of honey mushrooms in a greater sense as being one of two different kinds: conifer honeys and deciduous honeys. I usually see what I assume is Armillaria gallica on conifers in my area, and what I assume is Armilliria mellea on deciduous trees, but that is only a coincidence as A. gallica isn’t relegated to only conifers. There isn’t a real difference in the flavor, but I prefer the yellow capped species compared to ones that resemble the mushrooms below. 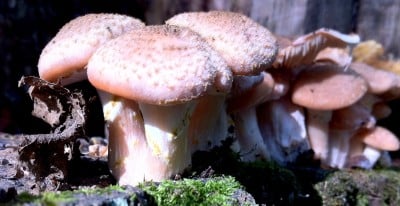 Conifer honey mushrooms on a stump. 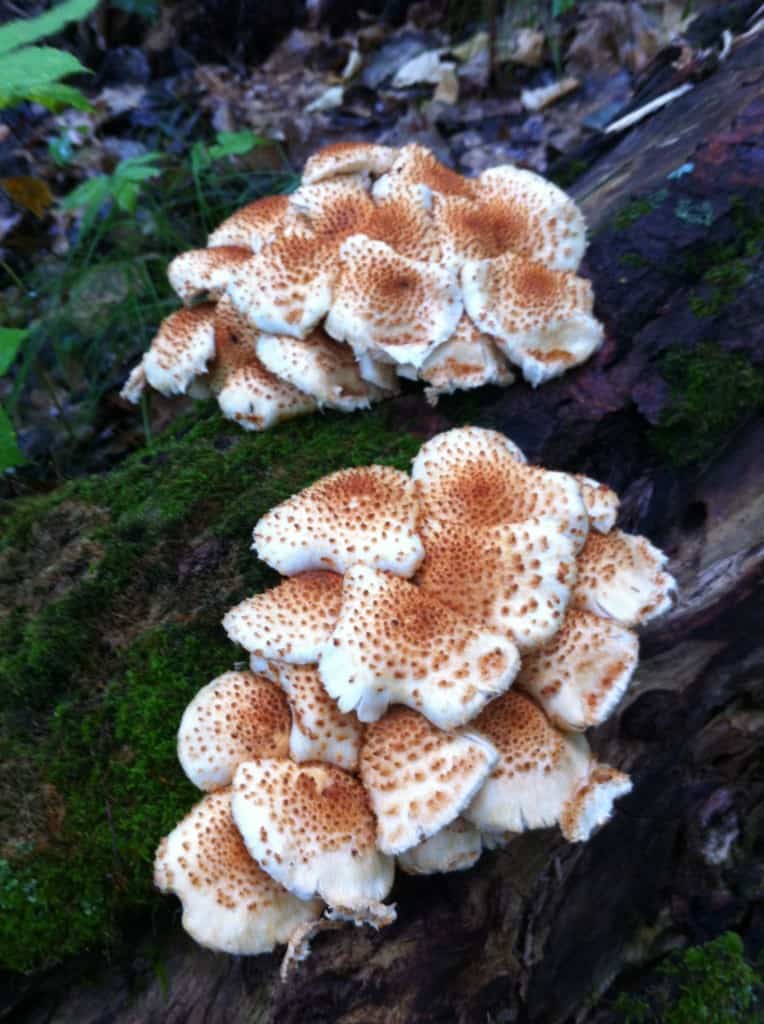 Just like a vegetable, and any other mushroom, you want honeys that are young and tender. The smaller the caps, the more crisp and bouncy they’ll be, and the less chance you’ll see any larvae in them (they love honeys in Minnesota and Wisconsin where I hunt) also, the stems won’t be as long and spindly.

If I do find honeys that have big stems, and they’re nice and bug-free, I may take them if I’m not getting much else. The stems are not amazing by themselves, but they’re ok, and still better than a cultivated shroom anyday. Expect to see size variation here and there, occasionally I see honeys of massive size, say as big as small frisbees when the caps open.

There’s plenty to be done with them. They can be blanched and pickled, roasted to concentrate their sugars and then marinated, sauteed, cooked in cream, dehydrated for soup in the winter, you get the idea. There is a lot more to do with them than just treat them like another mushroom though. Honeys are loved in Eastern Europe, as well as Italy, so if you’re looking for inspiration, try looking for recipes for mushroom from those cuisines-there’s a good chance some recipes could originally be made with honeys, but had their names changed due to availability. They also make great substitutes for mushrooms in Asian cuisine, where they’re natural thickening property can be used a bit like cornstarch. See below on mucilage for more on that.

Many mycological societies ban the serving of honey at mushroom gatherings and cookouts since some people have become ill after eating them. The biggest thing to remember is that they need a bit of extra cooking to make sure that they don’t give you any gastric upset.

Apparently some people are more sensitive to certain species too, so start out serving small amounts to check for allergies. I’ve also heard people say that the suspect species that can give intestinal upset is not the complex of honey mushrooms that grow in deciduous woods, but the coniferous species, Armillaria gallica. My advice is just make sure to cook them all completely through.

Don’t be scared though-I’ve seen more people become sick after eating thoroughly cooked black morels than I have honey mushrooms. When properly cooked, the Honey mushrooms are delicious and rich, with a slightly sweet finish.

Yay for mucilage. Have you ever cooked okra? or Cactus paddles? Honeys, along with other mushrooms like amanita, lactarius and fried chicken mushrooms give off mucilage when cooked in liquid. To avoid this, blanch the honey mushrooms in salted water before adding to a pickle liquid, or dehydrate them. People around the world have been enjoying honey mushrooms regardless of the mucilagenous qualities for years though. Packed in pickling jars they can be a little snotty, if they aren’t blanched first, but if you cook them in something like a soup or broth they will thicken it nicely, which means you can add them to soups almost like roux, or okra.

I should mention, when possible I like to serve honey mushroom caps whole, or if they’re really large, halved or quartered, they just look better, and taste better like that. The long stems can be reserved for duxelles or broth, etc.

Like most other mushrooms, honeys should cooked before freezing, they also dry well, but I like to cut the caps into 1/4s or halves to ensure they’re not tough. Blanching in lightly salted water and freezing with butter or oil is probably my go-to.