A vegetarian barbacoa recipe made with wild mushrooms? *dodges tomatoes* Absolutely. It might seem odd at first glance, but mushrooms, especially in Mexico, have been eaten as a substitute for meat in some areas for a long time, so simmering them in spicy chili broth and eating with tortillas or stuffed into a burrito isn't really that much of a stretch.

The process is basically the same as when I make barbacoa from beef. I make a simple broth infused with dried, toasted chilis (feel free to use your favorite kind) then I simmer the mushrooms in it all day.

Mushrooms are obviously very different from meat in many ways, so there's a couple things to take into account here to make this the best that it can be.

That being said, the recipe here is only a guideline to get you started, so feel free to play around with what you have and make it your own.

You want a chewy, firm wild mushroom for this. Polypores are going to be much better than a mushroom that gets soft, so stick to hen of the woods, chicken of the woods, pheasant back, or similar mushrooms. Gomphus and lobster mushrooms will also work just fine.

After mushrooms are cooked and have released their water, they're done cooking, and, unlike beef, won't get more tender from extending the cooking time.

Even so, to get the best flavor here, you really need to cook the mushrooms in the liquid all day to allow the flavor of the broth to penetrate the mushrooms.

It takes a while, and, unlike a big chunk of beef, the mushrooms need to be sliced thinly before adding to the liquid, where beef is pulled/shredded after cooking when it's become tender.

Seasoning the mushrooms after cooking

Another thing people take for granted with dishes made with shredded meat is proper seasoning, and this is no different. You can cook a giant piece of meat or a bunch of mushrooms in some really good stock and seasonings, but, most of the flavor is going to stay in the broth.

If you remove the mushrooms from the broth and just eat them, they might not taste too interesting. Key number two here is to season the mushrooms with some of the cooking liquid, salt, and, most importantly, extra fat before serving. 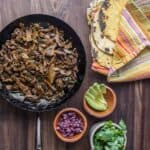