Chebureki are a traditional pastry from the Crimean peninsula (Slava Ukraini). Typically they're made from a lean, thin dough and filled with ground meat, onions and herbs, finished by deep frying to a golden brown.

I had my first taste of them during a stage at St. Paul's Moscow on the Hill under Chef Gary Krasner. Ground meat is traditional, but a filling of wild mushrooms, onions and a little mashed potato makes a great all-shroom version I'm sharing with you today.

For the traditional shape, you roll out a round of dough into a circle, then fold it over to make a half-moon. I'm awful at rolling out nice-looking circles so I tried working with my dough a few different ways. I know I'm not the only person that's circularly challenged.

Instead of rolling the dough out with a rolling pin, I put it through a pasta roller and then cut it into different shapes to see what would give the best balance of yield, filling and dough. Square shapes are probably the easiest, but I found that using a 6 inch ring mold allowed me to fit a good amount of filling while keeping the traditional half-moon shape to honor tradition.

It's pretty tight getting a perfect six-inch round of dough using a pasta roller, but these are supposed to be rustic pastries. Using a pasta roller is a lot easier than rolling them out one at a time to near-transparent thinness without the aid of an industrial dough sheeter as restaurants often use.

I grabbed a small variety wild mushrooms this week: hen of the woods, honey mushrooms, and a single Russula parovirescens. Just enough mixed together to make some filling. I saw a few aborted entolomas / shrimp of the woods too, but they were too dirty to pick.

I chopped all the mushrooms up as if I were making a rough mushroom duxelles, added plenty of onions and cooked the mixture until the onions were soft. Then I seasoned it with lots of herbs, a little hot pepper, and salt until it tasted really good. You want the filling to be heavily seasoned.

Since cooked, chopped mushrooms don't form a filling like pliable ground meat, I mimic the texture of meat by adding a little mashed potato to help the filling keep its form. Add a bunch of fresh herbs and some scallions, shallow fry the pastries golden brown and watch them disappear. 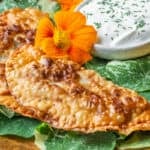 For shallow frying and serving

Feel free to mix up the ingredients for the filling here and use whatever mushrooms you may have. A mix of dried, rehydrated mushrooms is very good in fillings.