Huitlacoche, also known as cuitlacoche, is by far the most famous of any mushroom eaten in Latin America, with a history and tradition to rival any of the most prized wild mushrooms. If you like Mexican food and haven't had it, you're missing out on a fascinating culinary delicacy of Central America.

I grew up on a farm surrounded by corn fields stretching out as far as the eye can see, and I was taught sweet corn smut was something disgusting, a sort of plague that destroyed the fields of corn farmers.

What is it? Well, it's type of fungus. Huitlacoche is the fruit of a fungal disease that infects corn plants, known as the fungus Ustilago maydis. Corn typically gets infected with U. maydis spores as the result of an injury or disturbance (deer nibbling corn cobs, for example) which turns the corn kernels into mushrooms known as huitlacoche galls.

Huitlacoche is the indigenous name derived from Nahuatl, the language of the Aztecs. The mushrooms were prized as a food, and I've read the corn was inoculated by smearing cut corn stalks with the black inky liquid of the mushrooms.

After being infected, individual kernels of corn start to swell in size and turn grey. The corn kernels swell and "ripen", eventually turning black, soft, and powdery. That black mushroom powder contains the spores of the fungus that travel through the air to help the fungus spread.

Ustilago maydis is only one of a number of fungi in the Ustilago genus that infect grasses. These fungi spread by transforming part of the host plant into a vehicle for spore production.

In China, Ustilago esculenta infects Chinese wild rice, but instead of the grains being the vehicle for spreading spores, it makes the stems swell. Just like U. maydis, U. esculenta (as the name esculent implies) is also harvested for food.

Huitlacoche is now grown as an alternative corn crop in the United States by some American farmers, with the mushrooms being sold through wholesalers around the year. 25$ per pound is a common-a much higher price than cultivated mushrooms, or corn, for that matter.

The majority is sold frozen, but on a rare occasion you might see the occasional maize mushroom at farmers’ markets in large cities. It's a highly seasonal product chefs from California to New York City have begun to use in recent years

The mushrooms are sold in small 7 oz cans, typically running about 6-8$ each. If you go to a Mexican restaurant or specialty grocery store in the United States and get the huitlacoche quesadilla, 99.9% of the time it's from a can.

Unfortunately canned huit isn't as good as the fresh product, for a number of reasons. First, the canned version is expensive and may come already seasoned. The cans also contain plenty uninfected corn that gets cut from the cob along with the mushrooms. But, if canned is all you can find (and likely will be) it'll do in a pinch.

Depending on where you live, finding your own huit may be difficult. Having a field to hunt during the corn / rainy season makes it easier, but then the problem becomes how to find a field of organic corn you'd like to eat, since most field corn I know of is sprayed with chemicals.

Another tricky thing is unlike other mushrooms, huitlacoche patches are always moving and will concentrate where disturbances are, which brings me to the next point.

You're looking for things that have disturbed the natural cycle of corn growth. Here's quick list of the most common I see.

Choose dry, grey ears that seem firm to the touch. Vendors in Mexico often wrap ears in newspaper to insulate them. Once the ears are harvested, chill or process within a 2-3 days. Huitlacoche is delicate, and heavy rain will quickly ruin it, giving mushy kernels oozing a black, inky liquid.

Just like other mushrooms, insects like to eat these so make sure to inspect your cobs. Looking for holes in the husk is a good way of telling if grubs and bugs are inside.

There's a perfect window for harvesting, but the size of that window can depend on cultural preference. Underripe, the infected corn kernels will be too bitter and unpalatable. Too ripe they become increasingly brittle and could turn to a pile of mush on the car ride home.

What you want are ears with firm, plump kernels. It's fine if the kernels have a little black on them, which is common. Mushrooms exposed to air will deteriorate faster, so if mushrooms at the top of a cob look past prime, peeling the husk down can give you reveal fresher kernels underneath.

I have to mention the indigenous harvesting preferences. Typically, most people, even mushroom enthusiasts would say that wet or black huitlacoche is probably not good for the table. But, there's plenty of videos online of indigenous people harvesting corn smut that is grey, plump and perfect as I mentioned before, as well as old, slimy looking, or pure black.

My assumption is that the kernels turn a dark hue and evolve into powdery black spores as they mature, meaning that the process of turning black is not bacterial decomposition, but rather a natural enzymatic reaction used to spread spores, or what's known as "deliquescing" in mushroom speak.

Corn smut isn't the only mushroom to turn black and gooey, and a nearly identical analogy can be found in shaggy mane mushrooms, which can also be used as food after they deliquesce, assuming they're cooked.

The taste of huitlacoche is interesting. I've had flavors vary in my collections, but one of the first things I taste is an earthy flavor, with a slight bitterness and a not-unpleasant metallic taste, sometimes, but not always followed by a corn-like sweetness. 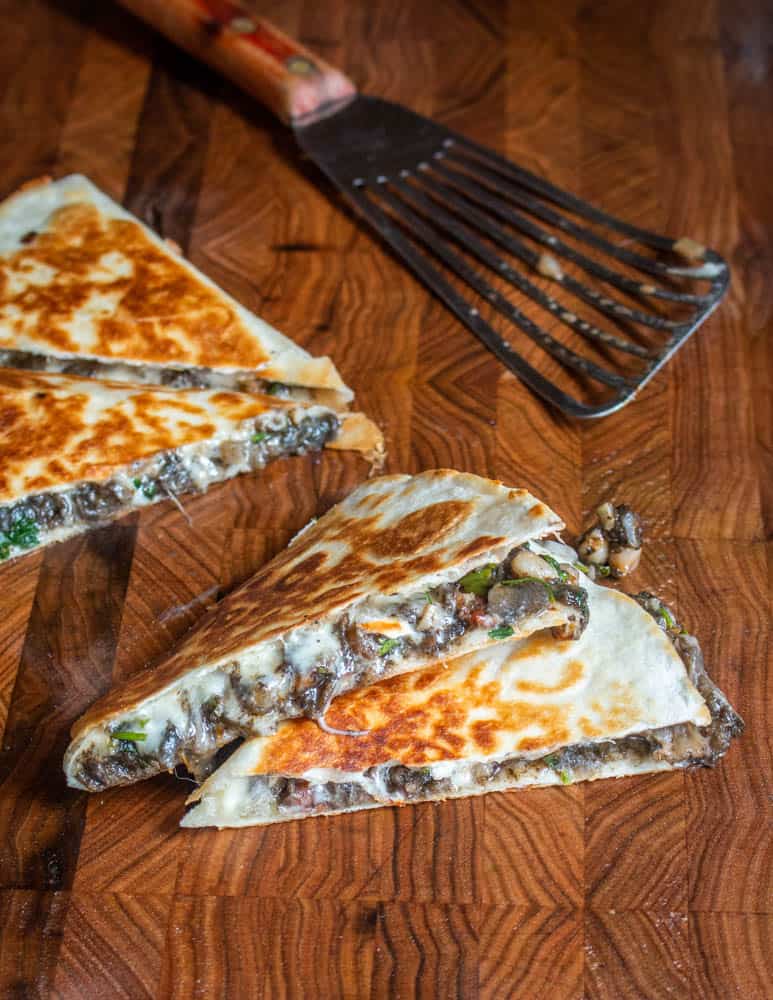 It's a strong flavor that some people won't like, which you can say about most things people call a delicacy.

I won't lie to you and say I loved it at first-I didn't. But, if you don't like it at first, don't give up until you've tried it a few different ways. The more I read about the history and tradition the more I wanted to give it another shot. After I met a farmer that grows it I couldn't get enough.

Huitlacoche is perishable and susceptible to moisture, so you want to process it quickly after it's harvested. Freezing is my first choice, but drying works too.

If you find a good patch of corn mushrooms and want to preserve them, the best way (as well as the easiest) is to freeze them. To freeze it, I put my kernels into a vacuum bag, seal and freeze. Frozen corn mushrooms can be cooked directly from frozen, or thawed and cooked. Once they thaw they'll quickly start to release liquid.

If you work quickly, corn mushrooms can be dehydrated. I haven't come across any traditional recipes using the dried mushrooms, but they work just fine.

To cook with the dried mushrooms, soak in water to cover, then add the water and the soaked mushrooms to recipes where you'd use it. 1 oz of dried huitlacoche will be a good substitute for two cups of fresh mushrooms, or 8 oz.

There's a variety of dishes the mushrooms are traditionally used in. Quesadillas with Oaxaca cheese are the most popular I've seen, but pupusas, stuffed masa cakes, and tamales are all great. As the mushrooms often stand in for meat, they make a good vegetarian taco, especially with cheese. I've even seen huitlacoche ice cream.