Choriqueso, the ultra-rich appetizer/dish of chorizo sausage baked with cheese or cheese sauce on top is good on its own, but it's incredible with huitlacoche / corn mushrooms thrown in the mix. It's a really unique appetizer for feeding a crowd, and a great way to introduce people to huitlacoche.

Order choriqueso at a Mexican restaurant, and what you'll get is likely one of two things: cooked chorizo warmed up in a dish with cheese sauce spooned over it to finish, or baked with grated cheese on it until it's golden brown and bubbling.

Both are ok, but grated cheese is easier for putting it together on the fly. Here I use a simple cheese sauce made from queso Oaxaca (you could sub monterrey jack or mozzarella as some Mexican restaurants do) and it's worth the extra effort to make a little sauce, but it's also totally fine to just toss some grated cheese on it, bake it, and call it a day.

The huitlacoche isn't traditional, but it's fantastic here. Unlike many other mushrooms, huitlacoche has a very strong, unique flavor that some people probably won't care for, at least their first time trying it.

Mixing the mushrooms with sausage is a great way to calm their flavor a bit, as well as making it so that the "dip" here isn't just pure meat and cheese. The flavors mingle together perfectly, making a sum greater than it's parts.

I use fresh-frozen huitlacoche here, and, unfortunately it's not easy to find in the wild, and it's expensive to purchase.

Making your own chorizo is fun, and I recommend you try it sometime, but for me, there's just something about the conventional chorizo. The tubes of sausage yield a very soft, almost spreadable meat (due to the extra liquid and vinegar that's typically added) that can be hard to replicate with homemade versions.

Using pre-made chorizo is not only easier, but it ensures that the choriqueso will be more of a dip, and easier to pick up with chips, where homemade chorizo can end up being a little chunky. Sometimes it's ok not to make everything yourself. 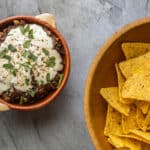 Chorizo cooked with huitlacoche, baked with cheese or cheese sauce and served as a dip with tortilla chips. Since chorizo comes in 9 oz tubes, I'm writing this accordingly so you don't have half a tube of extra sausage lying around, but know that it makes a big batch, so feel free to cut it in half if you need.