Venison shanks (any shanks, really) make great soup and stews, and this one, with Mexican flavors of dried beans and huitlacoche, is fantastic. Originally I was trying to recreate a soup my mother described to me from a trip to Mazatlan, but, instead of the brothy soup I intended, it turned into a more stick-to-your ribs sort of meal, so I just went with it.

The original soup was just broth, a couple vegetables, and some huitlacoche floating in it, and, to be honest, my mother said it wasn't her favorite thing. To be fair to corn smut, it was also her first time eating huitlacoche.

Huitlacoche has an acquired taste, for sure, but once you start to like it, you'll crave it. The real trick for me is finding places where the color can be supported. Dark, rich things, especially dishes that don't mind being black (dishes with black beans work great) are perfect.

To make this recipe, I smoke season and smoke some venison shanks for a couple hours, then transfer them to a pot with onions, garlic, and a bunch of huitlacoche, along with meat stock, chili powder, the venison shanks, a few herbs, as well as the secret ingredient: unsweetened cocoa powder.

The magic of bitter cocoa

The cocoa, along with the chili powder, to gently thicken the dish a bit, but, unlike adding extra chilis, the cocoa won't make things too spicy. As the Aztecs used both cocoa and huitlacoche (the tradition of cocoa living on in mole and other things) the flavors blend very well. Huitlacoche and cocoa share a similar flavor profile too, being earthy, slightly metallic.

Once the pot was on the stove, I could really understand why there's a tradition of putting corn mushrooms in soup. Even in a pot with smoked meat and ground chilis, the unmistakable aroma of huitlacoche is what hit my nose first when I walked back into the kitchen, say, every 30 minutes to check on it. There's nothing quite like it.

I served it to a few family members to rave reviews, topped with a little Mexican crema, pickled onions, and cilantro, and, after the pot was cleaned out after 1 meal, I made another double batch.

Keep it on hand if you see some frozen, fresh, or canned corn mushrooms. Know that while canned huitlacoche can work, it contains more of the field corn the mushrooms colonize than I like, so I definitely prefer the frozen or canned product. If you've ever opened a can of it, you'll know what I mean here. 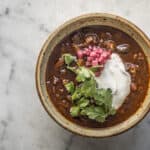