When I hired a new prep cook from Oaxaca, one of the first things I asked him about was how mushrooms are traditionally prepared in the region. I remember scribbling down "fresh tortilla with Oaxaca cheese", assuming it was a sort of quesadilla made with tortillas. I was both write and wrong in my assumption, but I didn't understand why until I ate a fresh tortilla stuffed with cheese in Costa Rica.

The "tortilla" that my employee spoke of wasn't a cooked tortilla sold in stacks like we're used to seeing in the United States. After my Costa Rica trip, there's no doubt in my mind that he was referring a tortilla made from fresh masa, cooked on a plancha, as that's how the one I ate was served.

It's a quesadilla or sorts, but eats a little differently in that the tortilla or fresh masa is essentially stuffed with the corn mushrooms and cheese, instead of the sides being open in the more common quesadilla using a flour tortilla cooked that gets folded over.

Both methods are good, but I liked this one so much that I ended up turning them into pupusas and making 400 of them for the Midwest Wild Harvest Festival. They were a hit, to say the least, with people shoveling them onto their plates and eating more than their fair share. If there's a next time, I'll be having people hand those out individually.

There's more than one way to go about making these. I think the easiest way to make them at home is by making the tortillas with two individual disks of corn masa. But, if you'd prefer the look of an empanada, you can make smaller ones, folding them over into little hand-pies. If it's your first time working with masa, I'd make them flat as pictured in this post below.

Similar in shape to an empanada, you can also make smaller versions of this. Personally I prefer the flat, stuffed/fresh tortilla version. As these aren't flat, they should be deep fried for the best color. 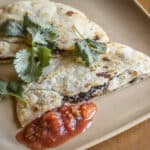 You can use a number of different types of cheese here, preferably a melting one like Oaxaca or cheddar cheese.