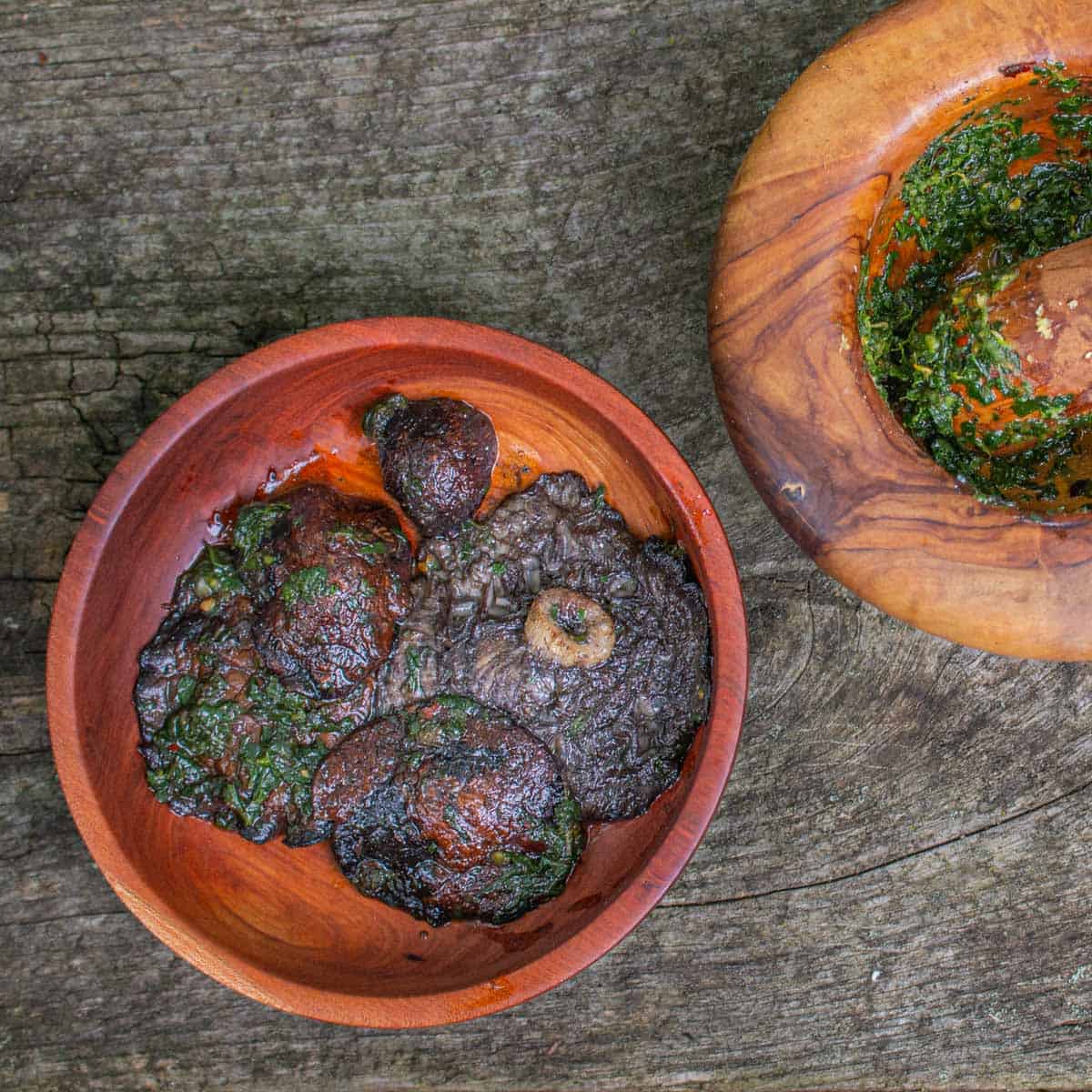 The more I cook, the less I put on a plate. I want the best nature can offer in the moment, and I want it as simple as possible, kind of. I say kind of, because something as simple as a dish called “wild mushroom caps cooked in embers” is more complicated than it looks.

For example, with this, for the best result, your mushrooms should be pristine, the freshest. You’re cooking whole caps here, so there’s no hiding if they have a bunch of intruders or larvae. The fire needs to be wood, not charcoal, because the wood is part of the seasoning–the few intense moments the caps are licked by the searing coals imparts flavor. It’s a flavor of smoke, fire, and something primal, I mean, is there anything more primitive than cooking without a grill grate, and instructions that tell you to “dust the ash” off the mushroom caps before you eat them? 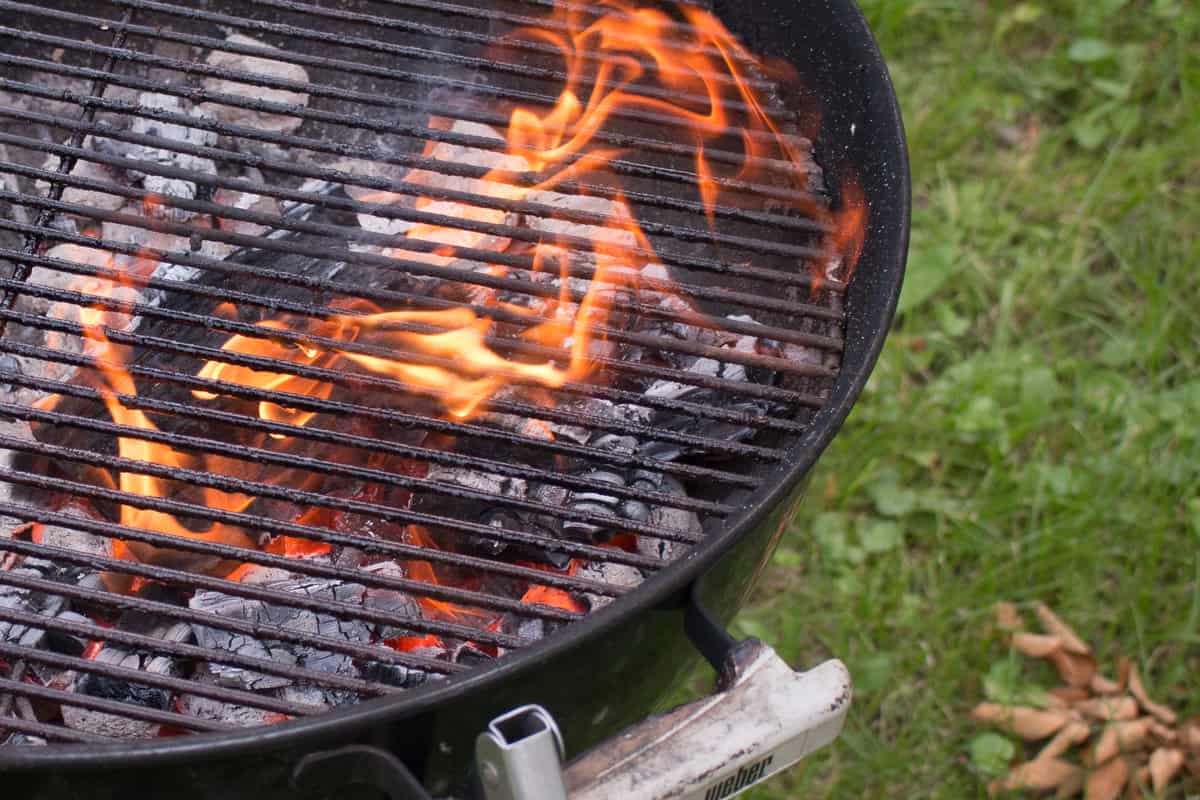 You’ll need a wood fire for the true effect. (Great for camping!)

This is a really fun dish, relatively easy to make, and is probably on some crazy-expensive tasting menu somewhere in one variation or another. I read about a similar preparation in a new book I’ve been reading called Honey From a Weed by Patience Gray, and it’s part of what gave me the idea here.

I’ve read hundreds of cookbooks, but this one is really something. It’s a journey of the authors travels accompanying her husband (a stone worker) through Spain, France, and Italy. She delves into regional cooking like no one I’ve ever read, and, refers to the hard to find ingredients,the plants, mushrooms, and vegetables with colloquial/common names, and Latin binomials. I can’t remember if I’ve ever read a cookbook sans Michel Bras, where the author/chef used Latin names, and even with Bras, his use of them was scarce, and more for how they sound on a menu (not a bad thing) than a goal of being informative. It’s a big jar of obscure culinary candy, as sweet as the black walnuts preserved in syrup, and preserves made with equal parts by weight of sugar and fruit in it’s pages. 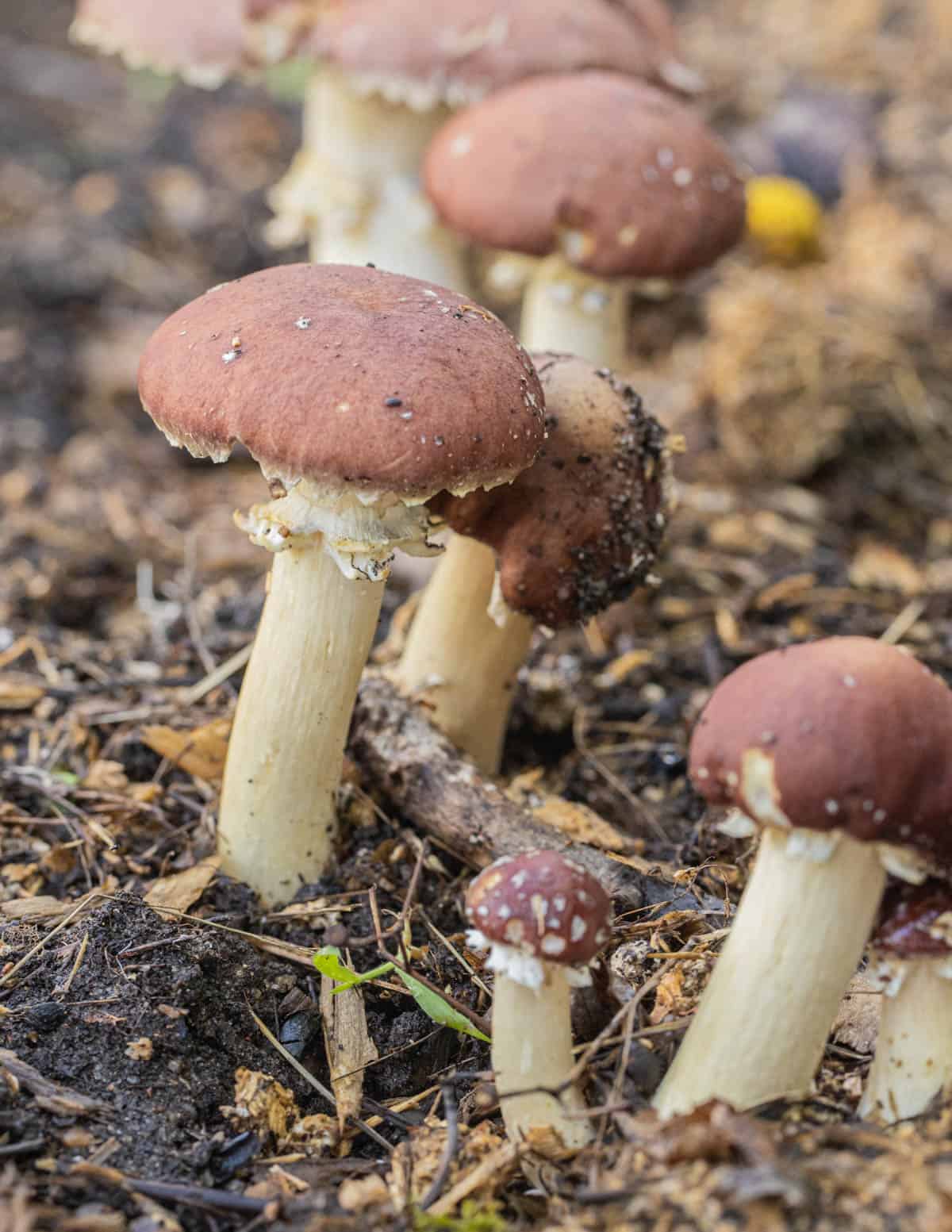 Stopharia are relatively easy to grow in your backyard.

When I snagged a few wine caps (Stropharia rugosoannulata), or rather saved them from my new friend’s woodchip pile this week as he was out of town, I thought I’d try out one of the methods in the mushroom section. Real quick, if you’re a mushroom hunter, you might consider picking up Honey from a Weed–the sort of preparations, and especially species Gray describes (think Amanitacae and Cortinarii, and more) is unheard of for the time (80’s). That, and it’s just a great read, if you like obscure food and old-school, minimalism, that is.

Here’s the jist: you take some mushroom caps, and only caps (they need to be flat), then cook/grill them directly on wood embers. After they’re done you brush them, toss in a rustic garlic-herb sauce pounded in a mortar and pestle with good olive oil, and eat. It’s a great way to celebrate scoring some wild mushrooms with big, fat caps, which are not as easy to find as non-fungus hunters might think, and that brings us to an important point about cooking shrooms like this. 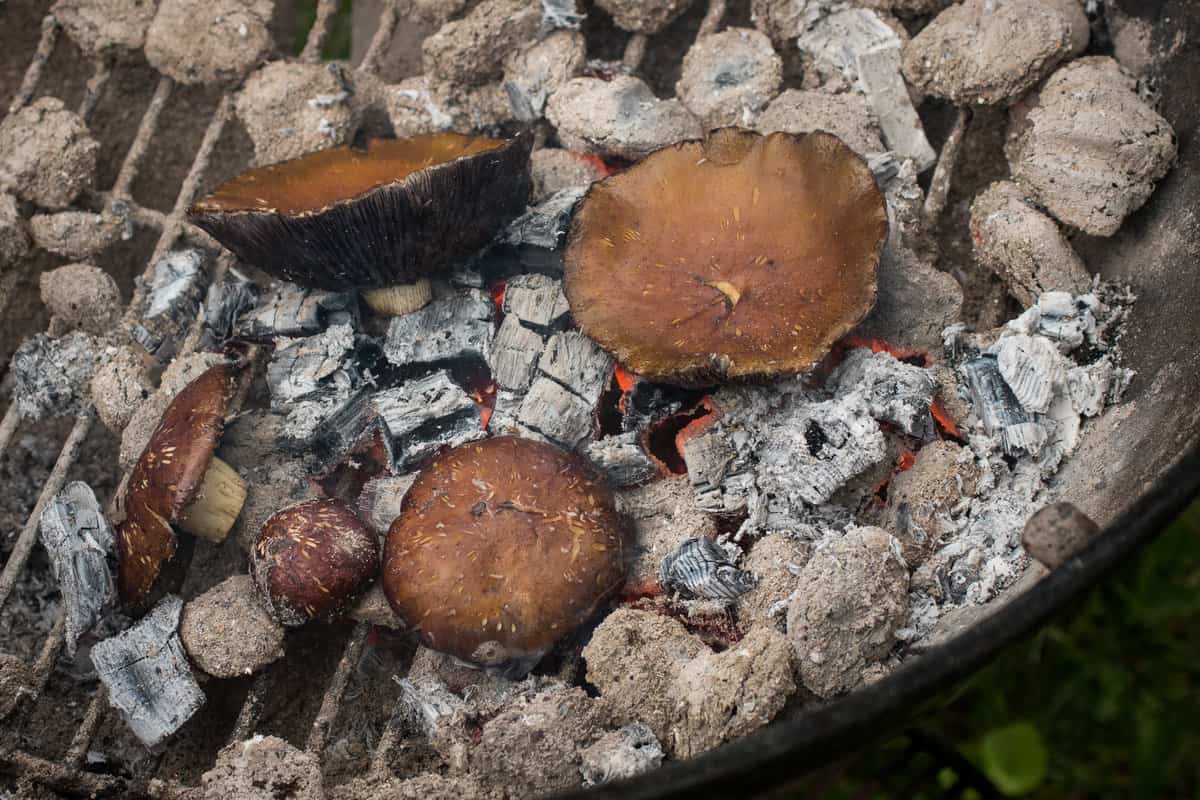 Yep. On the coals. Do not oil your mushrooms unless you *really* like fire.

Foraging mushrooms with big caps will probably mean you’re venturing into mid-level skill mushrooms, which, to me, basically means a larger array of gilled mushrooms. Of course boletes (mushrooms with pores instead of gills) can have big caps too, but if you pick boletes, you know finding them bug-free can be tough, and, at least near me, the ones with high-bug resistance often need long cooking or dehydrating, and wouldn’t make good candidates for quick cooking, like Leccinum species.

There’s some slightly easier candidates where I live like Megacollybia rodmani or Pluteus cervinus, and they would be great, as both are relatively easy to ID, and are pretty easy on the stomach. It goes without saying too, that big slabs of polypore like chicken of the woods would be good like this, watched carefully so they cook and don’t char, or wrapped in leaves. I’m probably going to try it with the next chicken of the woods I find, or a giant hedgehog if I get the chance to hunt with a particular friend of mine this year. 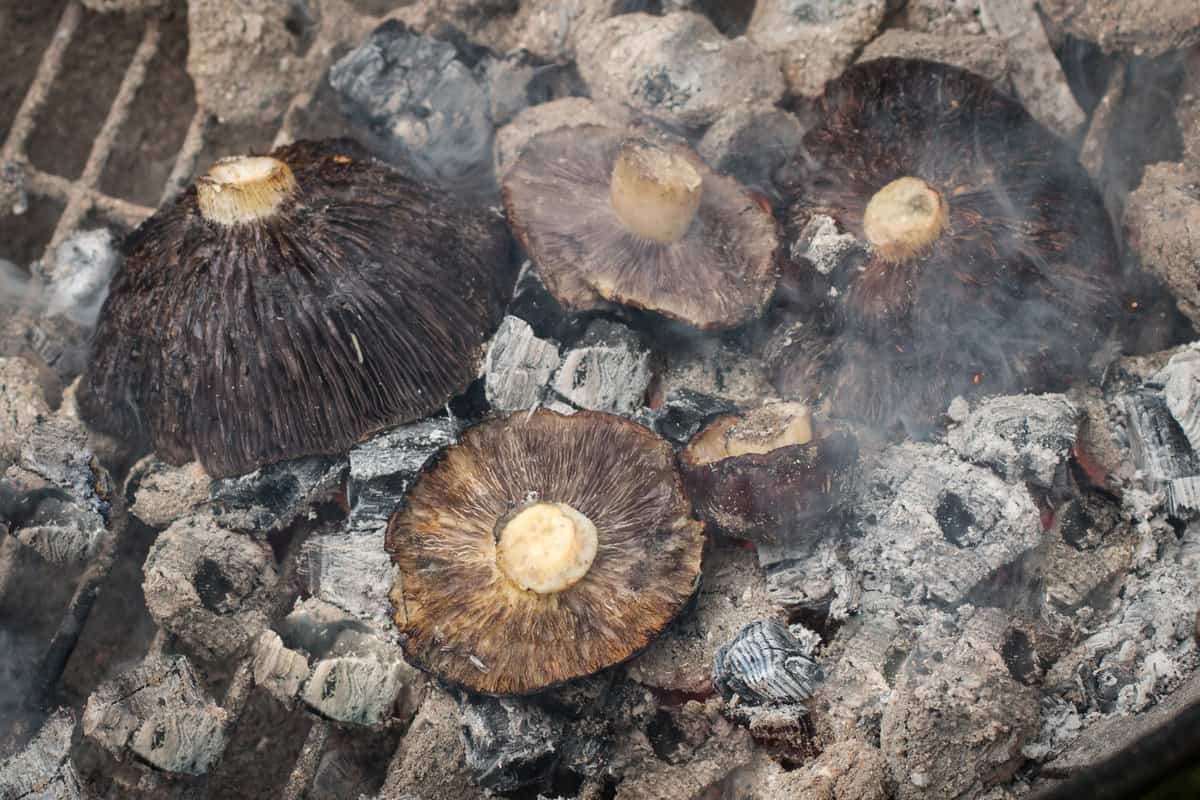 Flip them, not too soon, but not carbonized.

Anyway, that was a drawn out way of saying that not all wild mushrooms are good for quick cooking like this, which is why I thought of this method when I was picking the Stropharia/wine caps. Wine caps are a widely cultivated mushroom, and cultivated mushrooms, as a general rule, have a much lower incidence of causing any sort of gastric upset than do their wild cousins (morels for example) that mess with people’s tummies every year, for one reason or another.

So, if your on the fence about an ID, or are eating something for the first time, this is not the recipe for you. If you have some big mushroom caps, cultivated, wild or otherwise that you want to do something new with, and you’ve eaten them before, it definitely is. 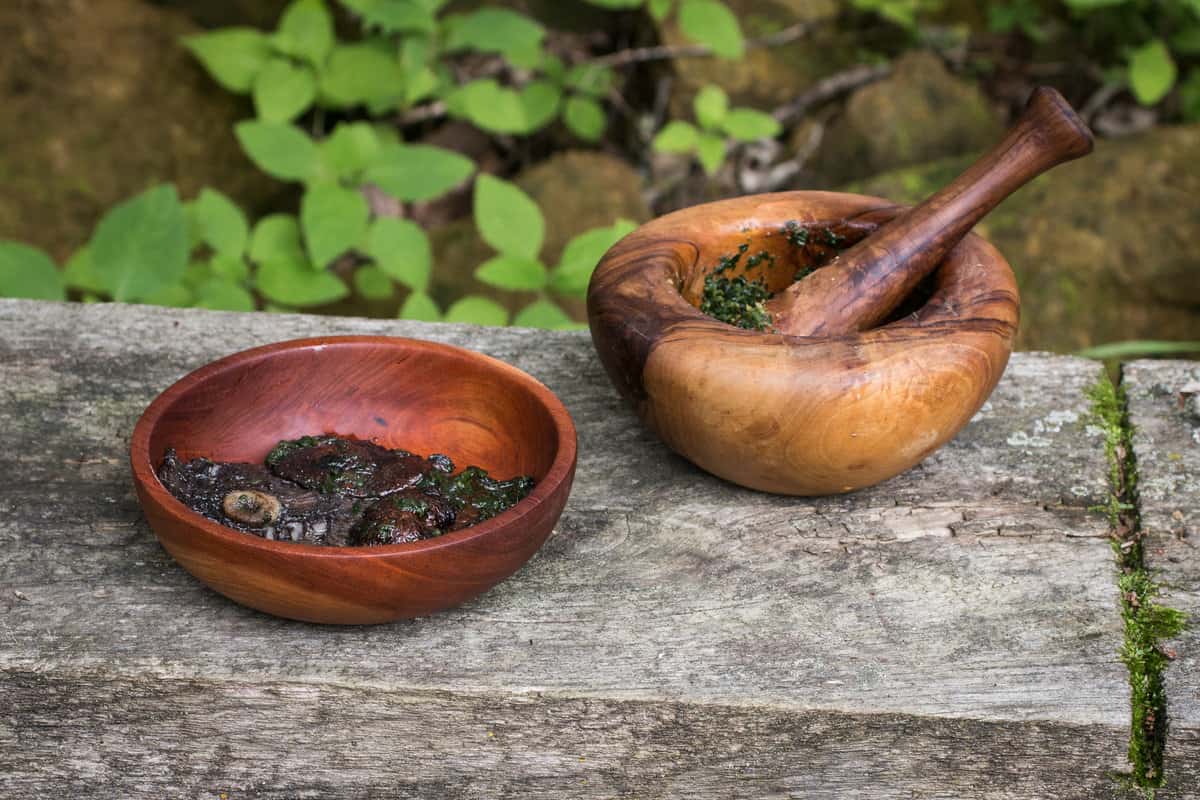 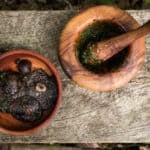 Wild Mushroom Caps Cooked in Embers, with A Mortar-Crushed Sauce