Story goes that in Sicily, Trapanese cooks would take oregano and lemon juice, mix it with sea water, and use it as a condiment. It's easy to make a modern version at home-no sea water needed.

Pronounced "sal-more-eel-ee-yo", the word is derived from Sicilian salmurigghiu. In Calabria it's known as Salamarigghiu.

The root phrase comes from the word for brine, which is salamoia in Italian. In Spanish it's salmuera. So, essentially, salmoriglio means brine.

The similarities between languages are probably due to the fact that Spain and Greece ruled Calabria and Sicily at different points in time-both places where the sauce is traditionally made.

Depending on where you are, the sauce could be called different things. Greeks have a similar sauce called Lemonolado. In Sicily, some recipes replace the lemon juice with white wine.

Other recipes might include fresh tomatoes. The first version I was shown included long strands of lemon and orange zest. I make the sauce with wild oregano (Monarda fistulosa) and it's one of my favorite bee balm recipes.

Some variations of the recipe make an oily, broken sauce, like the one I was first shown. There are other recipes I found that use a method that emulsifies the sauce with water and oil, creating a more creamy mouth feel. I prefer the latter.

A Sauce, Dressing or Marinade

Depending on what you want to do, the sauce can be both. If you want to use it as a marinade, you'll want to pat the meat dry before cooking, especially if you'll be grilling.

The sauce tastes strongly of oregano, with just enough lemon to make it sparkle. Here's a few ways I use it. It's a delicious, versatile condiment. 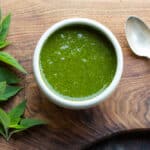 This is Excellent on fish, chicken, pork, delicate vegetables like roasted squash and potatoes, or as a compliment to dishes using summer produce, like tomatoes and corn, it would also be great mixed into mayonnaise.

I blend extra virgin and light olive oil here for a balanced flavor. You can substitute mild-tasting olive oil, or your favorite salad oil here instead. You can also use 100% extra virgin olive oil.

If you want to use bee balm leaves as I've done here, blanch them with the parsley to calm their flavor. Fresh oregano can be used as-is.