Here's a great way to use that bee balm salmoriglio sauce: as a summery garnish to a piece of fish.

Catfish is a great, often overlooked fish in restaurants, it's meaty, and juicy, not to mention cheap. Fried in a crispy dredge of some seasoned cornmeal, it's the beginning of a great meal.

Summer time means that lots of nice vegetables are around here in Minnesota, and to me, nothing evokes thoughts of warm weather like corn and tomatoes.

Hands down, one of my favorite garnishes for fish is just a handful of sliced heirloom baby tomatoes, they are dressed up a bit here with the corn and macerated onions, but it would be just fine to season some sliced tomatoes with salt and pepper and toss them on something too. As well, since the bergamot blooms at the same time, they're a natural pairing together.

This is a really easy recipe, you make a little salad of corn, tomatoes, and macerated onion, then fry up some catfish, plop on a little tomato salad and bergamot sauce and you're ready to go. It's light and colorful-everything that summer should be. 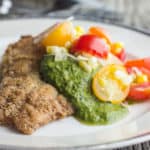 Yield: 1.5 cups, enough to garnish two entrees with some leftovers that you should probably eat out of the bowl with a spoon.
Prep Time15 mins
Course: Appetizer, Side Dish
Cuisine: American
Keyword: Heirloom tomatoes, Sweet Corn
Servings: 2

This is a simple salad: baby tomatoes, roasted sweet corn, onion, and some flavorful oil. Make sure your tomatoes are of the highest quality, and have not seen a refrigerator (it makes them mealy). It's also very important to macerate the onion to tame it's flavor. Make sure your knife is very sharp too, baby tomatoes get "shmushed" easily.
« Italian Salmoriglio Sauce
Roast Chicken "Demi-Deuil", With Black Truffles »