Wild fennel cakes are the best fennel frond recipe I know. Unlike most fennel recipes, it calls specifically for the fronds, greens and stalks of the plant. If you've ever wondered what you can do with fennel greens and fronds this is what you've been looking for.

Wild fennel is one of the most invasive plants I've ever seen, growing in massive stands on the West Coast. It's similar to your garden variety fennel, looking near identical, but with one big difference: there's not really a bulb.

During my chef tenure I learned by example that the best thing you could do with fennel was shaved fennel salad--the green fronds and stems usually being tossed into a stock pot, which is basically another way of throwing them away. The seeds, being so ubiquitous, are good too, with the wild ones being much better than conventional. But fennel is so much more.

While I researched recipes for my book I read a number of resources covering traditional European wild foods, and I was surprised when I came across wild fennel frond recipes.

I'd tried cooking with fennel stems and greens before, but the greens don't take well to the typical restaurant technique of quickly blanching before reheating as the delicate fronds have a shorter cooking time than the stems which never seemed to get tender. Seeing the traditional recipes (Tsigarelli is a good example) inspired me to give fennel greens another shot, and I'm really glad I did.

Sure, the internet will show you different things you can do with fennel stalks and fronds, but most of them are raw, and treat the fronds as an herb, rather than a cooking green, as in the forgettable fennel-frond pesto. Raw, in small amounts, the frilly fronds can be ok, but, just like carrot greens, their flavor and texture are way better cooked as a leafy green.

"Cooking" here is a bit of an understatement, for the best texture, fennel fronds and stalks need a long boil in water until they're tender and taste good to you, which can take anywhere from 15-20 minutes--a lifetime in typical vegetable cooking.

By the time the stems get tender, the green parts may start to lose their integrity and get soft, but, cooked tender and fried up with a little garlic, hot chili and olive oil, the only thing you'll notice is a mild-tasting green with a subtle anise flavor more pronounced than in its fresh state.

The cakes here made from fennel fronds and stems seem to be a relatively common Italian recipe for wild fennel-one that I was inspired to try some after reading about California forager Angelo Garro making them for Michael Pollen in his book The Omnivore's Dilemma.

You take a big pile of wild or cultivated fennel greens, simmer them until tender, chop them up, mix with a little egg, breadcrumb and parmesan, make them into little cakes and fry them up. They're delicious, and they may just change how you cook with the plant, since now, whenever I buy fennel, I look for bulbs with the greens attached, instead of just the bulb.

Obviously wild fennel is optimal here as they have more greens, but either will work. Serve them with a shaved fennel salad to appreciate the whole plant. 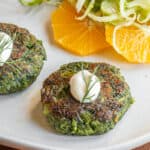