Wild greens are eaten all over the Mediterranean, and, if you have a copy of my book you'll know how much I like horta-the famous Greek conglomeration of foraged greens. For all intents and purposes, you can think of Tsigarelli (also known as horta tsigari) as it's hot cousin, literally and figuratively.

I read about tsigarelli first in Glorious Foods of Greece by Diana Kochilas, a book Hank Shaw recommend I read after we we talked about our mutual love of lamb and goat earlier this year. Kochilas book is filled with things I've bookmarked to try, but tsigarelli was the first thing I made.

After reading about the dish in Kochila's book, I browsed some of my other Greek books and found a different version in a book specifically on the food of Corfu (obscure culinary references like these are part of why I hoard my books).

The dish is reputedly from Corfu and, just like it's cousin horta, is made with lots of wild greens. While typical horta is just cooked wild greens with tons of olive oil and fresh lemon, tsigarelli is more pointed, containing flavorings like red tomato or tomato paste, and, most importantly, hot (spicy) paprika. In the version I have for you here, I suggest adding both paprika and cayenne so you can control the heat.

Tsigarelli often calls for other seasonings too, which sets it apart from traditional horta that typically is only plants. I've seen alliums like onions and garlic of vary ages, as well as leeks used in the dish.

Along with more alliums than horta, tsigarelli also seems to often call for herbs, well, one herb in particular: handfuls of wild fennel fronds, which taste a bit stronger than the ones you might see at a grocery store, if that store carries whole fennel bulbs with their stems and fronds attached, which can be tough to find. I've also seen mint and / or dill used.

The most common "herb" has to be wild fennel fronds. Wild fennel is widespread in the Mediterranean and the fronds are mentioned repeatedly in Kochilas version of the dish, but are noticeably absent in the version from a kitchen in Corfu.

Kochilas seems pretty adamant about their presence in the dish and the subtle anise flavor they add, suggesting that the cook substitute a pinch of fennel seed and or a splash of ouzo if fresh wild fennel fronds are not available.

The version of the dish from Pasta Grannies I found also includes fennel fronds. I've tried the dish made with cultivated fennel fronds and without, and, at the risk of going against tradition a bit, I think it's probably fine to make it with or without, as long as you're adding a bunch of alliums and paprika, which are definitely present in every version I've seen.

I like a good bowl of weeds as much as the next forager, but I'm usually having them as a side dish to meat. There's lots of dishes of greens and meat from around the world though, so it would be remiss of me to not mention that adding chunks of lamb, simmered until soft, then dried and fried crisp in oil makes for a great version, and a good, light entree. 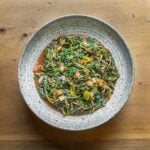