On one side of my family there's often a collaborative effort for Thanksgiving. This year, I'm bringing my favorite dried wild mushroom stuffing recipe, with a few handfuls of turkey gizzard confit for good measure.

When I say my favorite stuffing too, I mean it. I'm including some images of the same recipe that go back at least 5 years. Sometimes black trumpets, sometimes morels, always delicious.

Stuffing can be so disappointing, but as most of us know, if you've had a good one, you remember it. Here's a few notes on what I think are important.

Not the packaged stuff. At the very least roast that turkey neck and make one with that, if you'll be prepping in the kitchen anyway it's hardly more work, plus you'll need stock for gravy anyway. Spatchcocking the bird by removing the spinal column so the bird can be roasted flat is a good way to get some extra stock bones in a pinch.

Here I used some stock made from venison trotters that I had in the freezer that gets infused with dried wild mushrooms. The stock below is super rich, so I thinned it a bit to avoid stickyness from collagen.

A good wild mushroom stuffing recipe is a good place to use your dried mushrooms. Here I used a couple big handfuls of dried morels, honey and black trumpet mushrooms, but I also like using a single species like morels or black trumpets if I really want to taste them individually. Dried morels especially work very well.

Be careful to avoid any grit left at the bottom of the pot, so don't feel bad discarding the last tablespoon or so.

I go out of my way to use fresh sage. Some fresh thyme will do in a pinch but sage is the cornerstone herb of stuffings for me.

This could be bacon, a little sausage, or, as I use here, confit turkey gizzards. Just a little, not too much.

Good, old-fashioned stuffings often have some offal in them, and it's a good place for any you may have laying around. In a pinch,  just chop up some turkey offal and simmer it in the stock until tender.

I think it's fine to use those dried slices in bags at the grocery store. While it can be tempting to look for super high-quality bread, and you can, just know that it's good to remove the crusts from them as they can be tough.

No one will think twice eating bread of questionable origin once it gets soaked in buttery mushroom juice. 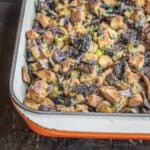 Gizzard Confit
To make gizzard confit, trim the gizzards of all membranes and discard, then season with 1-1.5% of their weight in salt, along with a generous pinch of chopped fresh sage, thyme, or rosemary. Refrigerate the gizzards overnight. To cook, put the gizzards in a small pan along with a clove of garlic, cover with rendered tallow, cover with parchment, then with foil and bake for 3 hours at 250F. Cool and roughly chop the gizzards and reserve until needed.
Leftover stuffing
One of my line cooks used to mix leftover stuffing with an egg and fry it in patties for sandwiches with cranberry preserves and turkey. I like it warmed up with a fried egg.
« Foraged Greens with Garlic and Paprika (Tsigarelli)
Classic Puffball Parmesan »