A classic steakhouse creamed spinach recipe I used to run at my steakhouse you should try. It's a simple dish enjoyed around the world, but particularly in South Africa, where it's served as a vegetable option.

This was on the menu at my first restaurant The Salt Cellar, a modern steakhouse. It's similar to versions you'll find at famous steakhouses like Ruth's Chris and Peter Lugar's.

Spinach or other greens

My favorite spinach is fresh from the garden, especially Bloomsdale spinach, which is extra sweet. If you have to use baby spinach from a bag it's ok, but if you have a chance to buy good fresh spinach from a farmers market that has stems attached I recommend it. Spinach isn't only leaves and the stems cook up nice and tender.

A few scrapes of fresh nutmeg is great here. If you don't have fresh nutmeg, you can use a tiny pinch of dried.

Some recipes might call for double cream, or even milk mixed with flour. Double cream will work (if you're in the U.K.) but, In my mind there really isn't a substitute for heavy cream. Don't worry about the calories in creamed spinach-you only need a splash of cream.

My favorite recipe calls for a little chopped jalapeno, and is inspired by my friend, James Beard Award-winning Chef Alex Roberts. He serves his version at his fast-casual restaurant Brasa.

Bacon or a piece of salt pork (optional)

While It's optional, I like to add a chunk of bacon if I have it to flavor the dish. You can cook a little sliced bacon until crisp if you like, or leave it in a whole piece as I have here. It may seem silly, but it's a chef technique. You only need a little piece about 2-3 ounces for a whole pot of greens.

I make a low carb creamed spinach with no flour added. Flour makes it too thick and soggy for my tastes. If you want to add some, add it when you're sweating the onions.

During the summer we'll usually use spinach. Greens are nearly non-existent in the Winter though, so I usually try to get spinach flown in from my friend's garden in Oregon. Occasionally during the growing season I'll use other greens. Lambsquarters or wild spianch is one of my favorites, as well as watercress or Swiss chard.

The creamed spinach is easy to make, a little shallot or onion, some fresh spinach leaves, salt, a teeny bit of jalapeno (no seeds, just flavor) and a splash of cream is really all you need to make a great side dish to go along with a big juicy steak or a piece of fish.

To make it vegan

To make vegan creamed spinach omit the bacon and use coconut milk instead of cream.

If you shy away from cream don't worry, you only need a splash of cream to make creamed greens. I can't stand creamed greens made with too much cream.

The key, the most important part, is that you need to make sure the spinach greens are cooked until tender and soft, and you should expect some variation on the cooking time depending on how much spinach stems your greens have, if any. 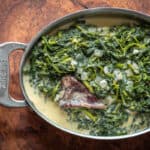 *Instead of the jalapeno, you can substitute a couple scrapes of grated nutmeg to omit any heat and steer the dish more in the direction of French-Continental cuisine.
« Wild Fennel Green Cakes
Jamaican Callaloo with Amaranth Greens »