Watercress, Nasturtium officinale is one of the most consumed wild plants in the world. You've probably heard of it, maybe even seen it in a nice grocery store, but, if you're unfamiliar with harvesting your own watercress or cooking with it, I'll help you positively identify, harvest, and enjoy it.

Before I hopefully inspire you to try some or propagate some in your nearby pond, know that watercress can be a bit invasive, and will take over streams and ponds.

It was probably brought over by Europeans as a food plant, and it's a wonderful food plant, but before you inoculate a stream near you by plopping some in, know that it will spread, which can be a good and bad thing depending on who you are, and where you are.

That also means you should feel good about harvesting it if you find a good patch, even if it's on public land.

I'm amazed at how many people I talk to that have gathered cress for years have never thought of cooking it.

I love a good salad any time of the year, but, safety of eating raw cress aside, I harvest watercress in large amounts specifically so I can cook it, since it's easier to eat large quantities cooked than it is raw. Consume mass quantities!

Whether you're picking in a spring or creek, a pond, or wherever else, you need to know about the water you're picking it from, and a few other things. If you're new to picking watercress, hands down the most important thing in my view, is knowing that the water is clean.

Even in situations where you know the water is good, like my private spring that's pictured here, nature happens: keep your eyes peeled for decomposing animals, or other dead things floating in the water, and if you are at all skeptical of where you're harvesting, skip the watercress, or blanch it in a large volume of salted water (start with a gallon).

I'm lucky, since I can easily inspect the entire pond while I'm harvesting, If you pick from a flowing stream, things can be more difficult to sniff out, the rotting beaver carcass or hog farm may be out of sight, up stream.

Know where you're picking from, and inspect it before you harvest. Regarding liver fluke specifically (a nasty thing) I've heard that it's probably too cold for them to thrive in cold-ish places where I harvest in Minnesota and Wisconsin, but to be safe, you can always cook your cress.

One thing people find confusing is the shape of watercress leaves. When you see watercress in the store, it will generally be circular-shaped leaves. In the wild though, it's different, and as the plants get older they will develop oval or lance shaped leaves.

I put some waders on and get into the spring, about waist height with a plastic cooler and a scissors. Why a cooler? Because it floats. If I don't have a cooler, I might use a restaurant fish box, at home, you could use something like a, shallow, thin, plastic tub, something like an underbed box.

But, even if all you have is a hand or an extra shirt, you'll be fine. I use a long scissors since it's very efficient, and keeps the quality of the greens I want to serve more than cutting with a knife, which can bruise the greens.

Collecting in the Winter

Absolutely! Even in the cold weather climate where I live in Minnesota, I can harvest watercress from the private pond with a spring I have access to.

It will have a higher proportion of stem to leaves in the winter, and I usually cook it since it's below water, but it's still water cress, and it's delicious.

Watercress is prized for it's spicy, brassica flavor that may remind you of mustard greens, but it really shines for the speed and bountiful harvest that a single patch and a scissors can provide. In just a few clips of a scissors, you can fill a cooler and harvest enough food to last a good period of time.

The flavor is going to be reminiscent of other plants in the mustard family: spicy hot, a bit like horseradish or radishes, with a heat increases in the summer as the plants get more sun.

Early in the year, they'll be mild and enjoyable by everyone, and there's just about nothing better than a steaming hot, tender pile of cooked watercress with lemon and a knob of butter.

Even in the height of the growing season, when raw cress is spicy hot, cooked watercress still makes a mild tasting, delicious vegetable, just cook the stems a bit longer to make them tender.

If you want to harvest the flowers for a garnish, use a shallow plastic container and use it strictly for flowers, instead of lumping them in with the rest and trying to fish them out later, flowers are more delicate, and getting jostled around can make them spoil faster. Store the flowers in a container or bag with a damp cloth or towel.

Tips for serving and cleaning

Wash your watercress in cold water for a few minutes, or longer if it's wilted or has been in a warm car on a ride back to your kitchen, then spin dry in a salad spinner, store in a plastic bag with a corner open, and refrigerate.

When you're serving watercress, you can get a little more creative with the flavors than with something very mild like romaine, since watercress is a little spicy, it can stand up to some stronger flavors, although a little lemon juice, good olive oil, and a pinch of salt is usually all I put on mine, a little anchovy vinaigrette and parmesan is great for a watercress Caesar. 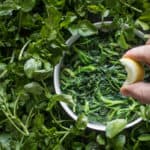 Without a steamer basket (the best for watercress)