Hostas are edible and delicious. They might be in your garden, but they're also a traditional food in Japan. They taste like a spear of lettuce crossed with asparagus.

No, no, you can't eat my Hostas! Was the reaction I got asking my friends with gardens if I could eat them. I didn't understand. I'd never even noticed them before. Sure, they look ok after they grow and the leaves unfurl, but they're going to look great on a plate, too, and doesn't eating them sound fun?

After I found out you can eat them a few years ago, I was dead-set on getting some, and if I had to sneak up to a yard with a scissors at night, I was prepared do it, the foraging gods willed it.

Once things started thawing, around April and May in Minnesota, I asked around. Everyone seemed to have them, but only one person was nice enough to bring me some shoots, they varied in size, some large, some tiny.

I wasn't all that impressed with the size, but they tasted nice and mild, kind of like a tightly wound butterhead lettuce that you can cook as an asparagus-type vegetable. Anne, if you ever end up reading this, thank you, and I miss you.

Then, as dumb luck would have it, while I was going out the door one day I passed through the garden area in between the two apartment buildings I live in and noticed some different hosta shoots just emerging.

These were different, better: big and fat, looking like a vegetable. I resisted the temptation to pick from the apartment complex though, since I didn't know for sure if they had been sprayed or something to keep them looking as "natural" as they looked.

Emboldened, I called some more friends and asked if they knew anyone with some more shoots. After a little more pushing, (and 20 bucks) got me a nice bagful of fat, un-sprayed shoots to take home and eat.

Cultivation and consumption in Japan

Hosta's might seem like a novelty but, like a lot of the things I root around for, they've been enjoyed in the Far East for a long time. In Japan they're known as Urui, and are described as a type of Sansai: an umbrella term for wild plants that used to be harvested from the mountains.

The Sansei description is similar to how Northern Latin America (Mexico) uses the term Quelites to describe a number of different small wild plants. Greeks use the word horta as a similar catch-all term for many wild green things.

One big question I had was if you could possibly get a second growth if you mow the shoots down early.

It would be a lot easier for me to convince people to let me pick some of their hosta shoots of they know they won't have big bald spots in the middle of their landscaping. I also know some plants, like comfrey, can keep giving regularly throughout the growing season if trimmed regularly.

The overwhelming reaction to cutting shoots out of someone's yard was a strange look, followed by a firm "no", and, I get it: no one wants to have a spotty looking yard. I think there might be a happy middle ground though. I did see one page with some promising info, too.

According to Scottish Forest Garden.com, the first flush of leaf shoots can be cut down to encourage a second flush.

"It is possible to harvest the whole first flush of leaves of an established plant without killing it: ornamental hosta growers will sometimes ‘mow’ their plants to get a second flush of fresh, attractive leaves."

After watching the deer eat mine and seeing them come back, I can confirm that.

Just like any other young delicate green thing, these should be kept in the fridge, mine keep for one-two weeks in a plastic zipper bag with a few holes punched in it for air, along with a damp cloth or paper towel.

Lastly, the most important question. Yes they look cool, yes you can ingest them, but do they actually taste good?  I say absolutely, positively yes, they were excellent, I prefer them to milkweed shoots.

All of the hosta species I tried (everything I've read says every species is edible) had a flavor like mild lettuces, the texture is where the money is though.

When the leaves are tightly coiled up they keep a little of their crunch, kind of like a spring onion but without any of the sharpness you would expect from an allium.

The method I liked the best was a quick-hot sear in a pan to brown them and caramelize the outside, which brings out a bit of sweetness. Cooked very fast, you can brown them, creating depth of flavor, as well as keeping the inside crisp: the best of both worlds.

I like a hot, fast sear with these. I did try other techniques like slow cooking, braising and roasting, but they came out a bit soft for me.

Like a lot of other things, when in doubt, research the culture that traditionally cooks whatever the ingredient in question is in this case, for me, it was Japan. A quick google for "Urui" should do you just fine, or try out the hot and fast pan sear I'm outlining below.

You can bet, when I get a garden (hopefully next year) I'll be growing a couple species as edible landscaping, until then I'll just have to keep begging my friends for their shoots.

Yep, you can eat those too, with some caveats.

As I watched the plants grow and mature through the Spring, I wondered if there would be any way to keep enjoying them as they matured, or without cutting the whole shoots.

The plants send up flower shoots after the leaves unfurl, they have a fantastic, sweet flavor, delicate, a bit like daylily flowers. They do have a bit of astringency to them, but you won't notice it much in a salad, just don't eat them by the handful.

The mature leaves I haven't tried yet, but a number of sources I saw online said you could cook them for a while until soft, and then use like a wilted green. I'm very skeptical of this method though since the leaves get super fibrous as they age. Once I try some, I'll share the results.

Have you cooked with hosta shoots or another part of the plant I missed? I'd love to hear about it. 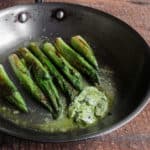