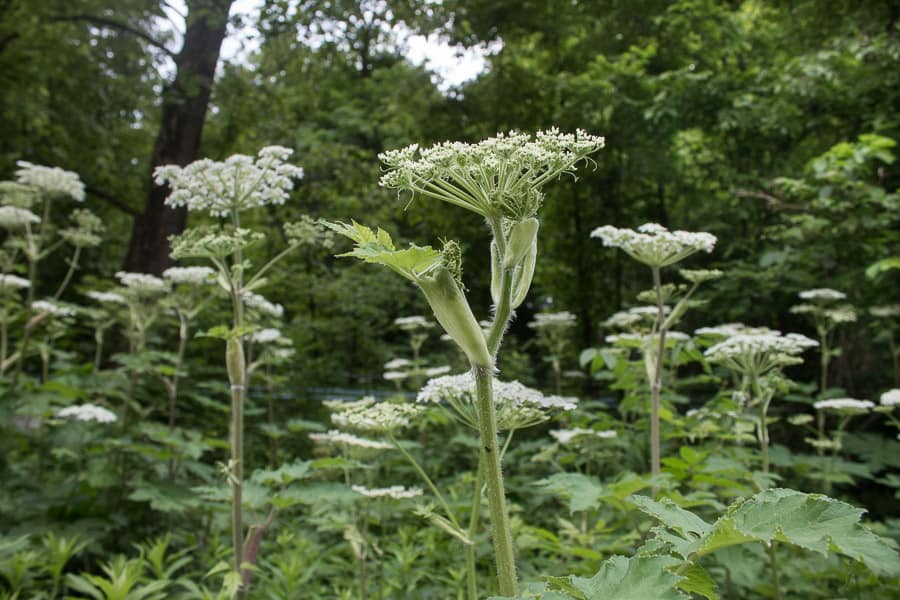 “It makes ye go blind!” “It can only die from a silver nail through the root!” “Eat wild parsnip? Never! There’s only poison parsnip!”  “It’s all over the roads and trails, storm the woods! kill it with fiyaaaah!”

These are pretty much the sayings and overall feeling conveyed by the well intended but torch-wielding public about cow parsnip, a plant that’s become one of my favorite things to pick, eat and to serve to guests throughout the year. It took a year or two for me to really understand it’s seasonal changes, forms and edible parts, but after I studied it (my local species is Heracleum lanatum) it became a work horse for me.

Over the year, it evolves and changes shape from herb to vegetable, a baby vegetable to cooking green, beautiful flower blossom to flowers, and finally a spice (the seeds) all parts that can be eaten, and enjoyed. It’s the poster child for the myriad of uses some wild foods can have, so now every year I look forward to foraging the cow parsnip in all it’s forms throughout the seasons.

This special plant has a tough road ahead of it though. Like a lot of others in the family of Apiaceae, the family parsley and carrots are in, it’s subjected every year to a lot of demonizing. The fear and occasional hatred of it and some of it’s relatives can be traced to a couple different things in my opinion:

Why Is Cow Parsnip Demonized?

1. It’s casual resemblance to hemlock (I don’t think they look like each other at all)
2. The fact that it’s sap can cause dermatitus if it hits the skin and is exposed to sunlight (the culprit are compounds called furanocoumarins)
3. It’s close cousin wild parsnip is labeled as a noxious weed in Minnesota, but most people will lump cow parsnip in with it due to the name
4. It’s close relation to the more widely demonized giant hogweed (Heracleum mantegazzianum) whose sap is said to be more aggressively dermatitis-inducing

1. Common garden parsnip also has sap that’s a phototoxin, and people eat it all the time (Source, Forager’s Harvest)
2. The plant has been used (and still is although less commonly) by nearly all indigenous people of North America as a food (Source)
3. Indigenous people have actually used it as a dermatological aid, despite it’s phototoxin properties (Source)
4. Indigenous people generally consumed the plant raw in the Spring as well as cooked, and after preservation by drying or holding under lard for the cold season (Source)

The phototoxin compounds are said to react with sweat, and sun. Given that, I generally cut them with a scissors and avoid touching any of the sap. I generally harvest this plant without using gloves, but I’ve heard reports that some people can be more succeptable to the furanocoumarins than others, similar to poison ivy, until you understand how the sap can affect you, I’d advice you to wear gloves.

As soon as the shoot or whatever part of the plant I’m harvesting is cut, it goes into a paper grocery bag, then straight to a sink full of cold water to refresh them when I get home, especially if I’m picking them in the heat of the sun. After the shoots or leaves are harvested and washed, I pack them tightly in in a plastic or paper bag, with a damp towel to help them not dry out, and refrigerate.

You Lie, My Cow Parsnip is Bitter!

I’ve heard a few accounts of this, both from reputable sources. Both sources were also from California. I’m speculating, but I think bitterness in this plant could be from differences in species being picked. Another hunter I know that cooks them every year in Britain suggested that extended exposure to sunlight can concentrate compounds in the plant, similar to how watercress can get spicier from Spring to Summer. If anyone has further evidence or information on this I’d love to hear it.

There’s plenty to enjoy on this plant as it grows and evolves throughout the year but you need to understand how to use it. Think of cow parsnip as half herb-half vegetable. To be used as a vegetable it needs to be harvested young.

Early to Mid-Spring. The first, and most tender cow parsnip you will eat. The young shoots when just coming out of the ground are almost like a small leafy vegetable. I like to wilt them in a little butter or fat, and toss with pasta or a few other spring vegetables for a medley.

Very, very young shoots. You can let them grow more than this but eating them super young is fun.

Early to Mid-Summer. This is the most common stage for eating, and you’ll be able to collect the most volume from a patch of plants at this age. Separate the leaves and stalks, and peel if you want. I like to slice the stalks and cook as I would celery, then toss the leaves in to wilt in a dish at the end. 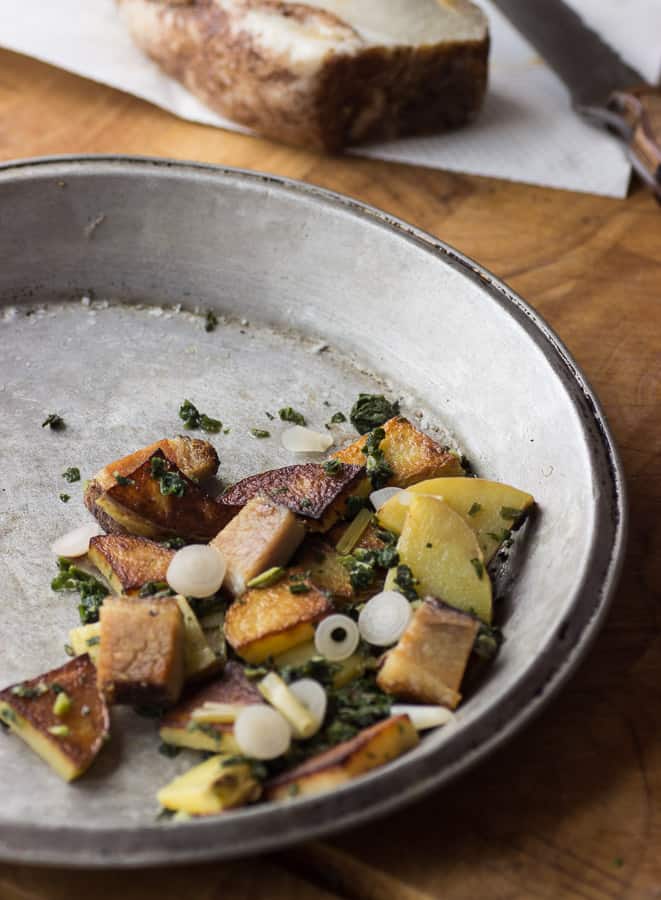 The young leaves can be wilted like any other green, they have a strong, celery like flavor. 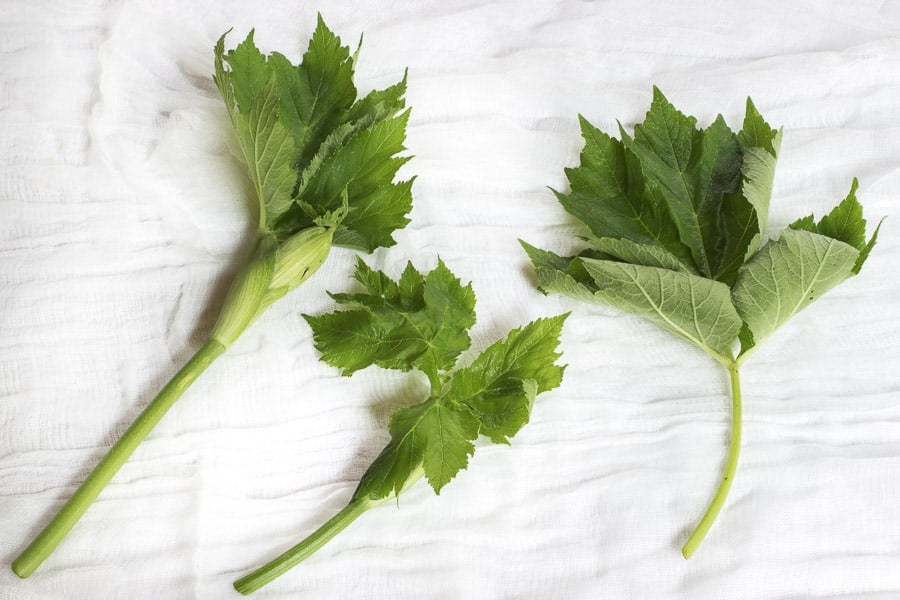 An Italian specialty. These are the most difficult part of the plant to catch, but if you can get them they can be collected in quantity. One trip I took at the right time in 2016 gave me hundreds and kept the deep fryer filled for weeks. The flower buds will keep in the fridge for weeks at least, packed in a plastic bag with some holes for breathing and a damp cloth. Deep fry them, and I guarantee you will look for them every year. 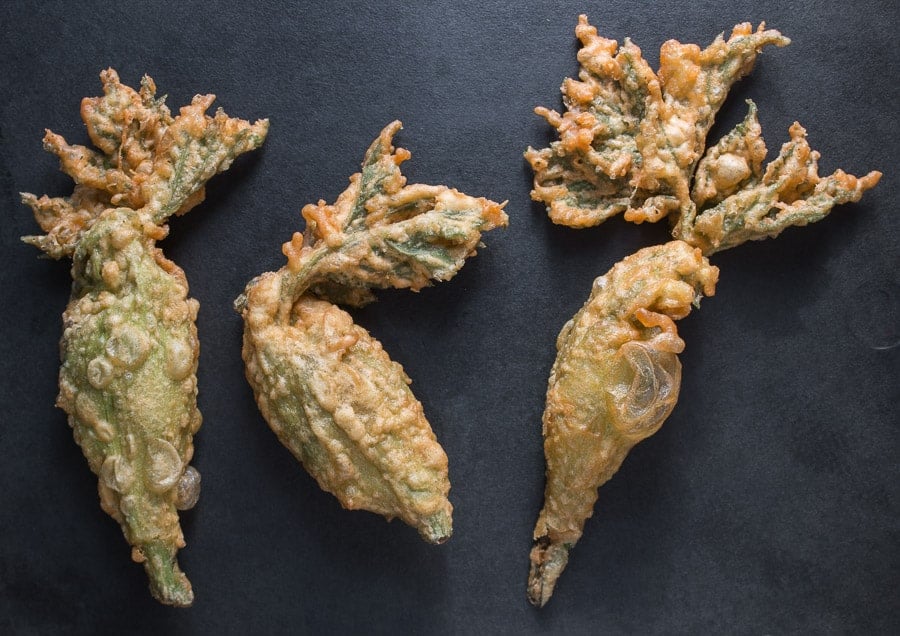 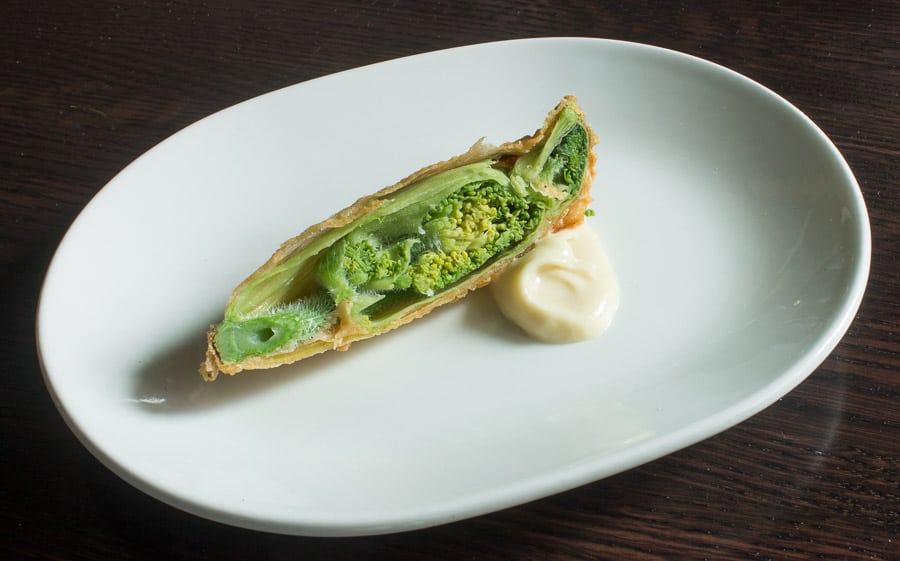 After the blossoms open, the flowers will show. Don’t expect to make a meal out of them, but they add good great flavor and look to salads and can be used to make infusions into things like alcohol or vinegar. I haven’t tried drying them yet. 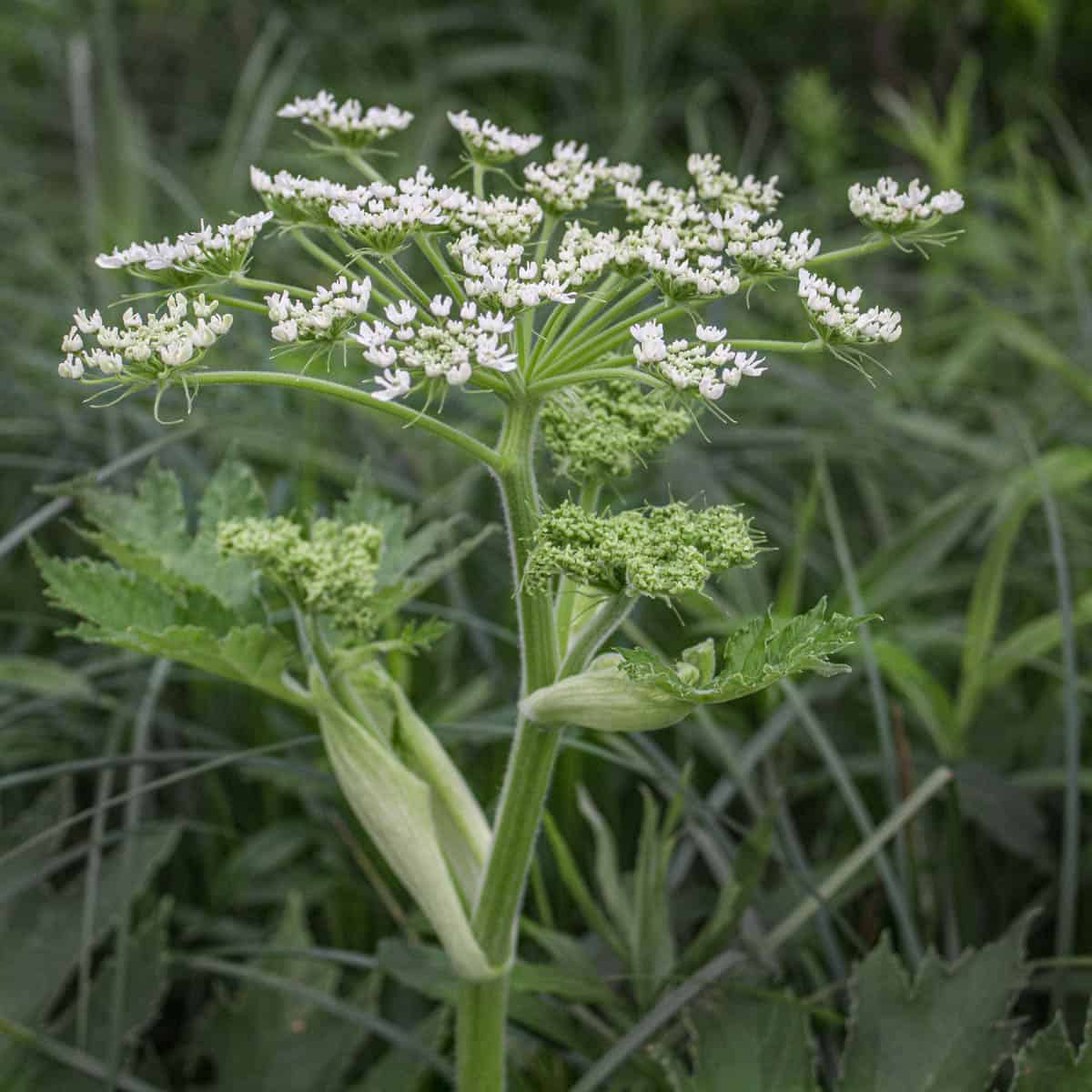 At this stage, the only part you’ll want to eat is the flowers of the plant. I think it’s so pretty at this age.

The last part of the plant that can be harvested. The seeds will naturally dry in the sun, and can be harvested without using gloves. Pick the seeds, then dehydrate, freeze to sterilize, then store. The flavor of the seeds is incredible, one of the strongest wild herb/type seasonings I’ve ever tasted. It will over power cloves, cinnamon, and cardamom. I like to use them with spicy dishes, as well as in fruit and sweet and sour sauces.

Other related plants have seeds that can be used similarly. Angelica seeds are similar in how they grow, but the flavor is much more musky and muted, common wild parsnip (Pastinaca sativa) seeds are nearly identical to cow parsnip seeds in flavor, but slightly smaller in size. 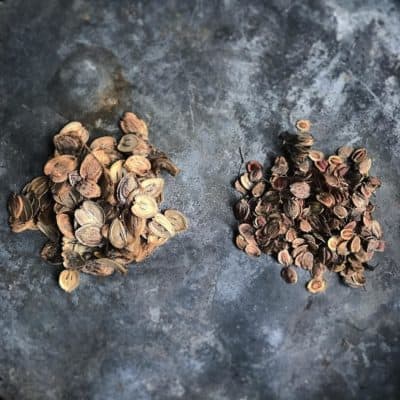 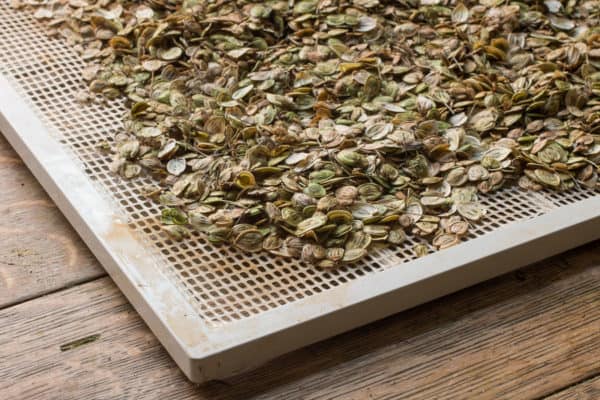 As I mentioned, Indigenous people would often eat the peeled stalks raw. Generally they were peeled before eating. Know that eating the stalks raw seems to have been like a treat and there is evidence for over-indulgence of the raw plant causing indigestion. Milkweed can do the same thing, from my experience. Taking this into account, I’ll tell you that 100% of the time I’ve served cow parsnip to guests at a restaurant or in a home setting it has been cooked, and at most an ounce or two per serving. I have never had anyone get gastro-intestinal issues from serving it cooked.

It’s important to look at the age of the plant that you’re going to eat Like with so many other things you can forage, younger plants will be the best to eat, older plants can be stringy, become bitter, or have their flavor change as they age.

Just because a plant is getting older doesn’t mean you can’t eat it though. As the plant continues to grow, new, young edible parts can form, my favorite being the flower blossoms. I really find inspiration from indigenous methods too: Are the stalks a little older? Try to peel some of the stalks if you find them tough, or make sure they’re cut into bite-sized pieces. You’ll be surprised what a difference a couple knife cuts can make.

As far as wild greens and vegetables go, cow parsnip does have a stronger flavor than many. To ensure you enjoy what you make with this plant, here’s a helpful tip: think of adding cow parsnip to a dish like you would add an herb. Would you cook a pound of basil with bacon and onions and eat it? No, and I won’t with cow parsnip. Would you tear some leaves of basil and cook them in a salad of wilted lentils with bacon and onions? Absolutely, and the same goes for the stems and the leaves.

Anyone else know of indigenous methods or evidence involving the use of this plant? I’d love to hear it. 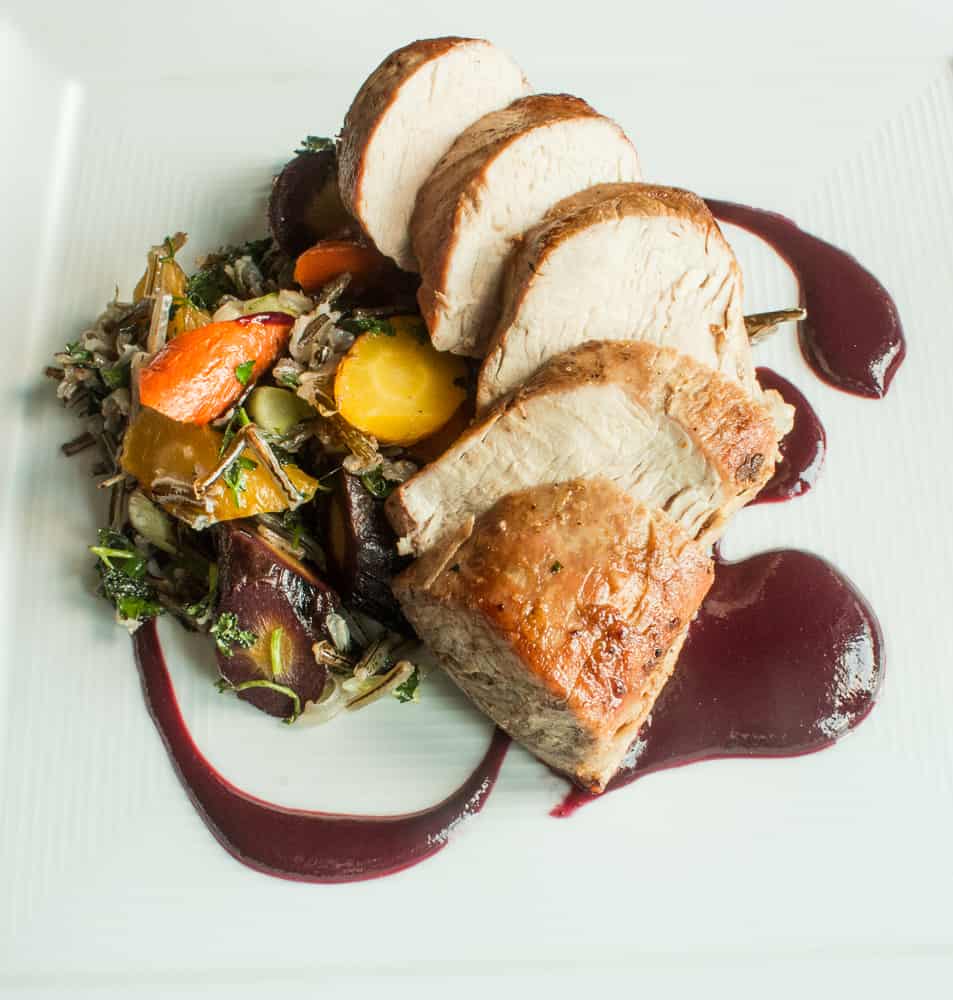 Cow parsnip seed makes a fantastic sweet and sour fruit based jam, see my recipe for that here.