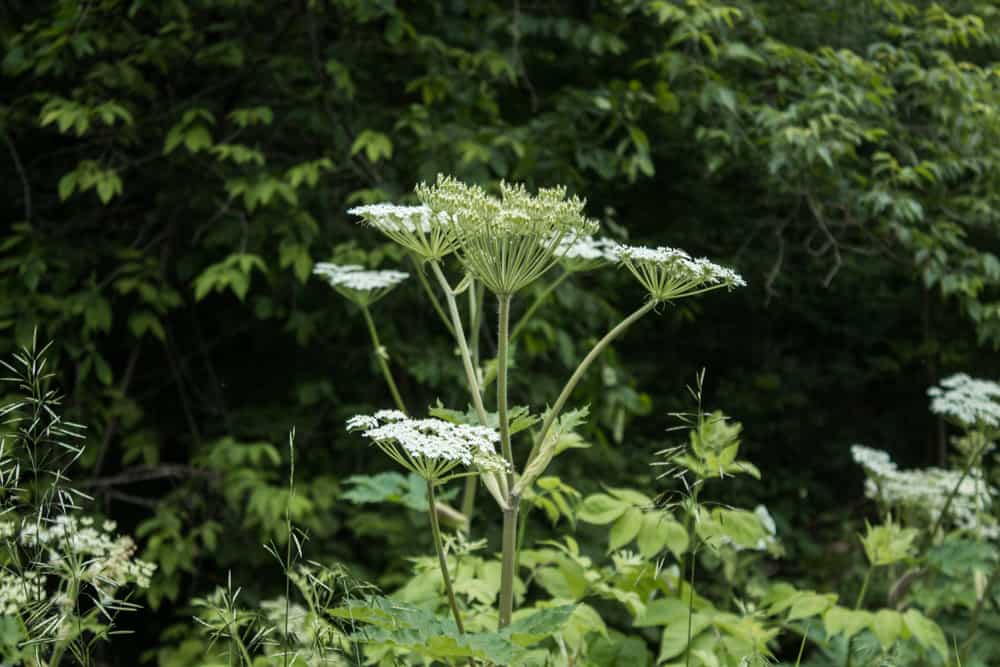 After cooking with the seeds of angelica last year, I remembered cow parsnip has a similar structure and fruiting cycle. Both plants grow at the same time, look a bit similar, so I thought if angelica produces seeds you can eat, cow parsnip should too, right?

I can’t find any mention of them in guides or literature, but some of my friends on social use them for jams, jellies, and things, so this past year I waited to see what the plants did, checking on them when I saw angelica starting to produce seeds.

I’ll tell you, angelica seed is worth harvesting to cook with (most of the time I use it as a fennel substitute) but once I cracked some of the parnip seeds open and smelled them, they about made me go cross-eyed. The scent is a strange, un-mistakeable citrus, limey, intense and bright, very different from the sweet scent of angelica. 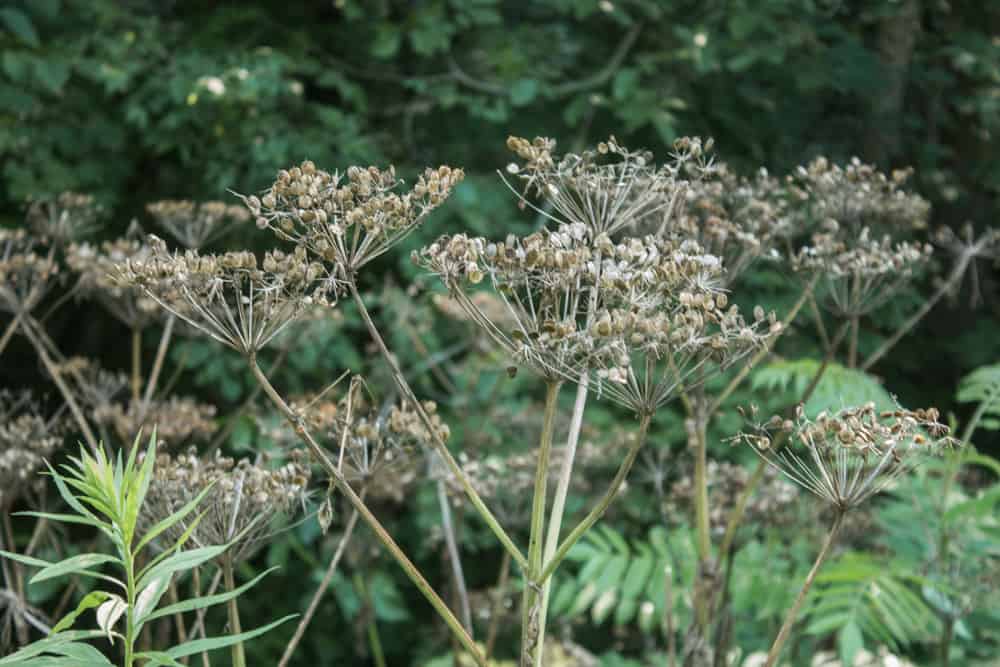 Seeds ready to pick. I didn’t even have to use gloves.

Will picking cow parsnip seeds give me a rash?

This was something I was excited to sort out. The sap of cow parsnip, and regular garden parsnip is a photo-toxin, that if you get on your skin in the sunlight, will turn into a nasty rash that lasts a long time. I’ve had a photo-toxin rash on my face before and yeah, it’s as shitty as it sounds. Sam Thayer discusses the plant’s danger (and lack there of) in depth in his book Forager’s Harvest.

Don’t be scared though. As with digestibility of wild mushroom species like Suillus and Leccinum, dessication via the sun and de-hydration work magic. My assumption going into picking the seeds was that the photo-toxin sap of the plant is going to be more virile while the plant is green and full of life, and hopefully less potent when the plant has been dried in the sun, which is when you want to harvest the seeds.

At first I handled the plant with gloves like I normally do when I pick it fresh for the table. Afterwords I did some experiments breaking open a few seeds and pieces of the dried stem, rubbing them on my ankles to check and see if there was any sunlight reaction, which there wasn’t. Viola. After that I just started plucking the seeds with my bare hands, and I haven’t had any sort of reaction.

Dried cow parsnip seeds. Some a little green still, some fully dried when I picked them from the plant. I found no real difference in the quality from dried to slightly green seeds.

After the plants have grown and created flower bulbs that sprout into flowers during the summer the flowers will create seeds, which eventually dry and get blown off by the wind so the plant can re-produce. I found almost no difference in the flavor and aroma of seeds collected while they were green, and seeds collected after they were fully dried on the plant. That being said, it is a bit easier to remove them from the plant after they’re fully dried. In Minnesota, I found them starting to create seeds around July/August, with the seeds remaining harvest-able on the plant for a good month or two.

I pick the seeds, put them in paper bags, then de-hydrate them for future use and keep them in labeled, air tight containers. 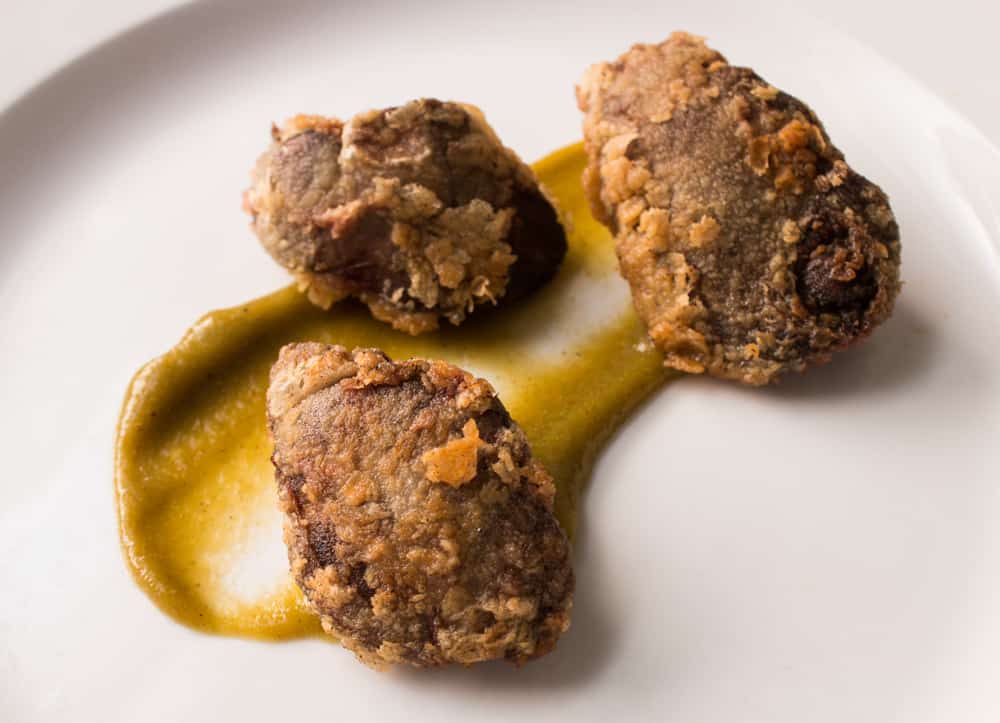 Cooking with the seeds, successfully

This is the trickiest part. An unequivocal truth of my kitchen training tells me seeds and nuts should always be toasted to improve their flavor, as is true with the seeds of angelica, but weirdly it’s not the same with cow parsnip. I tried toasting the seeds and the flavor dimmed, lost it’s citrus edge and was pretty much unnoticeable, same goes for seasoning fish filets or a piece of meat with it and searing it in a pan.

The breakthrough for me came thinking about angelica and a rhubarb compote I made with it earlier in the year. I captured the aroma of the angelica by cooking it with something that would take it’s scent, the juicy rhubarb absorbed the aroma and stretched it further than it could have gone on it’s own, like with truffles, the flavor of it is almost better when it’s been cooked or infused into something else.

Avoiding unpleasant texture from the husk

You’re going to want to have a coffee or spice grinder handy to cook with these. If you’re making a chunky salsa verde or something, you will want to grind them very fine and then sift out particles of the husk since they’re very tough and have an unpleasant texture. If you puree things in the blender and strain them, it’s fine to just throw them in whole while whatever you’re cooking is on the stove. 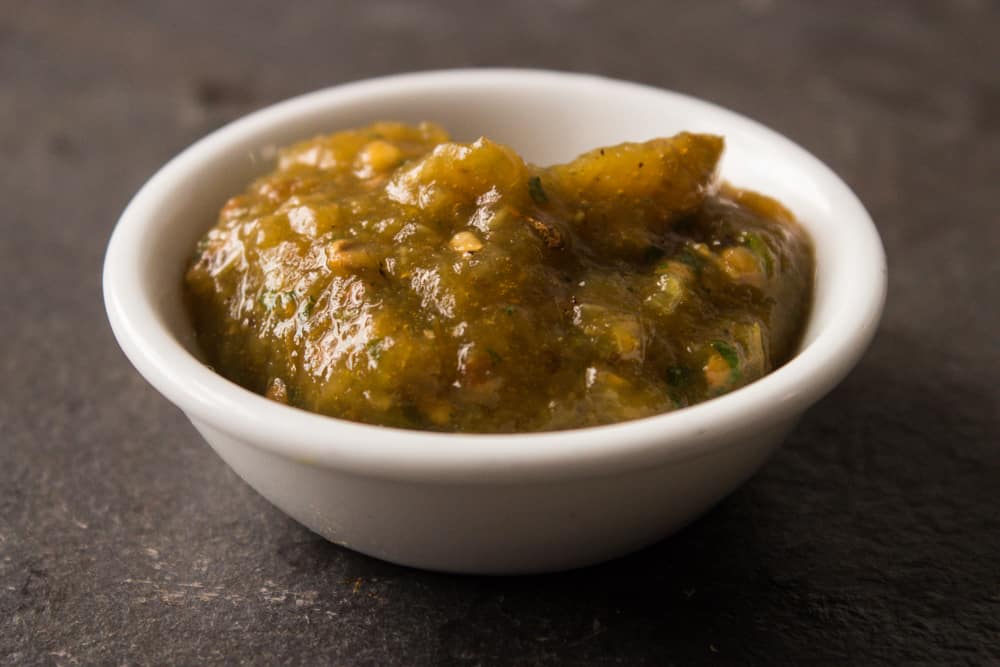