I love cooking with blood. It's hard to come by though, so that usually means it's a once-a-year thing when I might help someone butcher a few lamb. I typically get enough for about 15 pounds of sausage out of that, which is plenty for me, and leaves enough so that I can donate some blood sausage to others and try to convert them to the wonder that is Hematophagy.

Of the bloods I've worked with, pork is the easiest to come by, lamb the second, but poultry blood I've never seen sold by anyone. Poultry blood is supposed to be nice and rich, and I'd read that in some places it was preferred to others, so I jumped at the chance to harvest some myself when someone asked me to help butcher some old laying hens, of which I also got to harvest unlaid eggs, that I mentioned in this post here.

The caveat: you're going to need a bunch of chickens--at least 7-8.

After doing the deed and eating all my poultry blood, I can tell you that probably the biggest reason we don't see much about culinary poultry blood, besides the obvious outdated cultural taboos, is that there just isn't a lot of blood in a chicken. A lamb will give me a good pint or two, but with chickens I was lucky to get ¼ cup out of each bird. That is not a lot of blood for the amount of processing a chicken that comes afterwords--and I wasn't even plucking the birds. So, there's that.

Since I didn't have near enough blood to make a batch of my typical sausage, I made a new recipe, and it's a good one--I'd been meaning to make a Scandinavian blood sausage to compliment my creole version. My typical blood sausage uses wild rice, lots of herbs, and spicy creole seasoning, but, for this one, I went a different direction with Scandinavian spices, since I knew I wanted to fry a bunch of sausages up with apples and onions--a pretty traditional pairing given the warm spice-combos you'll typically find in Scandinavian blood charcuterie that might remind you of pumpkin pie or French quatre-epice, that great terrine and all-purpose charcuterie seasoning.

Stretching the blood with starch

I only had 2 cups of chicken blood though, so I needed a way to stretch it a bit. What I eventually settled on was equal parts of blood, ground chicken from the birds themselves, caramelized onions, oats and cooked buckwheat. Buckwheat is often in European blood sausage, but typically in the form of groats--not cooked porridge/polenta. I love buckwheat flour though, and after cooking it gets a dense, meaty sort of richness--I have at least one chef friend who uses buckwheat to make vegetarian sausages just because of that at his restaurant.

Oh it is a good sausage. Rich, lightly spiced (a bit like scrapple) and great fried up with apples, apple sauce, or fried onions. It's a little loose to cook, but after cooking you can treat it like any other sausage, and it makes a great addition to stuffing. I did pack some of it into casings, but since this is such a small batch, I recommend frying it up into black pancakes, like the one pictured, unless you keep casings around regularly, or need an excuse to buy some. 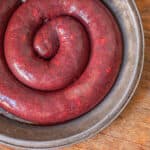 This isn't a huge batch, so, unless you keep casings around all the time, or want an excuse to purchase some for making other, more normal sausages, I'd reccomend trying the sausage pancakes pictured in the post, or baking it in a loaf pan like scrapple or meat loaf, and then cutting into slices and frying afterwords, instead of casing 2 lbs of sausage.
« Hosta Buds
Desert Stew »